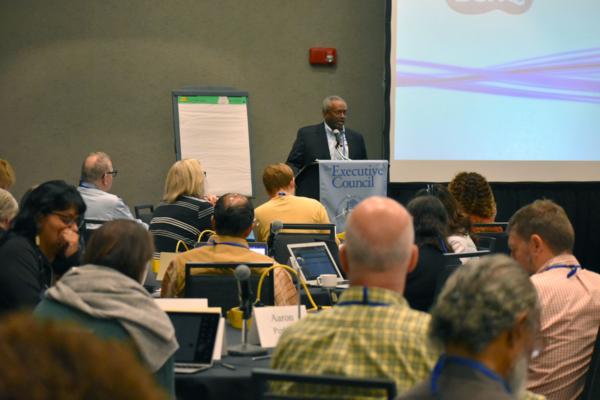 [Episcopal News Service – Montgomery, Alabama] The Episcopal Church’s Executive Council gathered here Oct. 18 for a four-day fall meeting with racial reconciliation as a central theme, amplified by this city known for its prominent place in the histories of both the Civil War and the civil rights movement of the 1950s and 1960s.

The business sessions have been scheduled around a full-day pilgrimage on Oct. 19 that will include visits to the Legacy Museum and the National Memorial for Peace and Justice, as well as a meeting with Bryan Stevenson, the death row attorney whose Equal Justice Initiative founded the two institutions in 2018 to tell the story of racial injustice and violence in the United States, from slavery to mass incarceration.

“It is the history of America, and this is important for us to remember,” Presiding Bishop Michael Curry said in his opening remarks Oct. 18 in a meeting room at the Embassy Suites Montgomery Hotel and Conference Center. “It’s not just a Southern story, and it’s not just a regional story.” 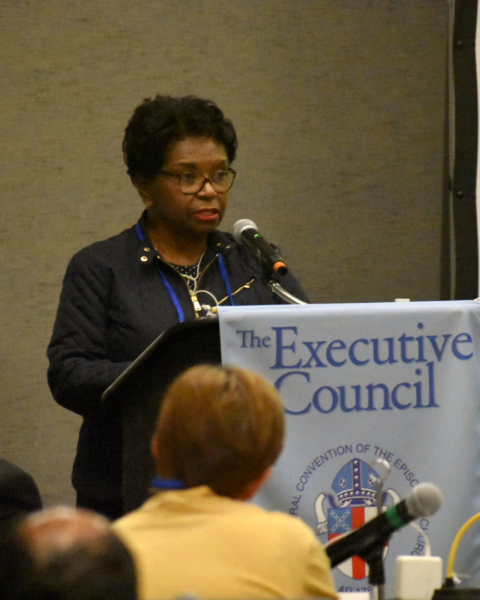 The day opened with Morning Prayer and a homily by Diane Pollard, a lay member of Executive Council from the Diocese of New York. Pollard described Montgomery as “a city that is as simple and yet as complex as the shaping of the American dream. If the streets and buildings could only speak to us, what would they say?”

Montgomery is Alabama’s capital and a city of about 200,000 people. It was the first capital of the Confederate States of America in 1861, and Confederate President Jefferson Davis worshipped at St. John’s Episcopal Church here until the Confederate capital was moved to Richmond, Virginia.

Montgomery also is the city where Rosa Parks was arrested on Dec. 1, 1955, for refusing to give up her bus seat to a white passenger. In 1961, the Freedom Riders were attacked by white mob at the Montgomery bus terminal. In 1965, Martin Luther King Jr., after leading the voting rights march from Selma, delivered his “How Long, Not Long” speech on the steps of the state capitol before 25,000 people. King got his start as pastor a decade earlier at the nearby Dexter Avenue Baptist Church.

Touring the city’s historic sites will offer Executive Council members a lesson in the country’s terrible history of injustice, Pollard said. “These places will also provide us with a painful opportunity to ask ourselves why and how these events could happen,” she said, and they will reveal parallels to present-day injustices. “These issues haunt our existence as the land of the free.”

Executive Council carries out the programs and policies adopted by the General Convention, according to Canon I.4 (1), and it typically meets three times a year. During this triennium, it has set a goal of meeting once in each of The Episcopal Church’s nine provinces.

Twenty members of Executive Council – four bishops, four priests or deacons, and 12 laypeople – are elected by General Convention to six-year terms, with half of those members elected every three years. In addition, each of The Episcopal Church’s nine provinces elects an ordained member and a lay member for six years, and those elections also alternate every three years.

Curry, as presiding bishop, serves as president of Executive Council. Vice president is the Rev. Gay Clark Jennings, in her position as president of the House of Deputies. Jennings said in her opening remarks that she was eager to meet with and learn from Stevenson during an afternoon gathering Oct. 19 at Church of the Good Shepherd.

“The deep injustices in our justice system are no recent invention,” Jennings said. “Stevenson’s work and witness teach us about the inextricable connection between the enslavement of Africans, the reign of terror known as Jim Crow and the modern-day systemic racism that leads to our country incarcerating more of its citizens than any other nation in the world.”

Jennings also highlighted the work of St. John’s to unravel a racist myth within its own walls. The congregation had long maintained a plaque on a pew that identified it as the place where Jefferson Davis once sat for worship, but research into the pew’s history found that the connection to Davis was tenuous and its 1925 dedication steeped in racism. The congregation announced in February it had removed the plaque and pew.

“The history that most of us learned in school is riddled with stories – you might call them myths – that render invisible the way that race, or what we think of as race, has created and sustained our economy and our social structures, including our churches,” Jennings said.

Curry, in his opening remarks, read a passage from Maya Angelou’s poem “On the Pulse of the Morning.”

“‘History, despite its wrenching pain, cannot be unlived but, if faced with courage, need not be lived again.’ That’s the spirit of being in Montgomery,” Curry said.

The presiding bishop continued by highlighting the positive responses he and his staff have received to the Way of Love, which offers resources centered around seven steps to help Episcopalians bringing Jesus to the center of their daily lives. Curry suggested it shouldn’t be surprising that congregations are adopting the Way of Love, “because I think it reflects who we really are.”

Curry also briefly eulogized Maryland Rep. Elijah Cummings, who died this week. Though Cummings was not an Episcopalian, Curry held him up as an example of “just a good human being, who really did try to live out the social teachings of Jesus of Nazareth.” Just as Cummings strived to work with lawmakers who disagreed with him, Curry said The Episcopal Church can be a force for seeking the good in each other, “not to change anybody’s vote but to change how we relate to each other as human beings.”

And Curry, whose sermons frequently quote Martin Luther King Jr., described plans for staging one of The Episcopal Church’s ongoing series of revivals at a major venue in New York. Details of that event are still being worked out, but Curry said the church is embracing greater evangelism because it shares King’s vision that we must “learn to live together as brothers and sisters or perish as fools.”

Executive Council’s work is divided among four committees, which will review and finalize resolutions for votes of the full council on Oct. 21. A large portion of those resolutions will come from the Finance Committee, which has begun the process of drafting a budget for the 2022-24 triennium.

The Rev. Mally Lloyd of the Diocese of Massachusetts, the Finance Committee chair, provided an overview of the committee’s agenda, starting with a series of resolutions on gun safety and Israel-Palestine that were submitted by the Committee on Corporate Social Responsibility. Other resolutions will address travel reimbursement for volunteers, fundraising priorities, diocesan assessments and the creation of new meeting rooms at the Episcopal Church Center in New York.

The Rev. Michael Barlowe, the General Convention secretary, announced future meeting locations for Executive Council through General Convention 2021. The next meeting will be Feb. 12-15 in Salt Lake City, Utah, and the other meetings will be held in Puerto Rico; Baltimore, Maryland; Providence, Rhode Island; and Cleveland, Ohio.

The Executive Council also is voting to for a replacement for a member who resigned earlier this year. Four nominees were chosen out of 58 applications received for the position, Barlowe said. The council is in the process of voting on those four nominees.