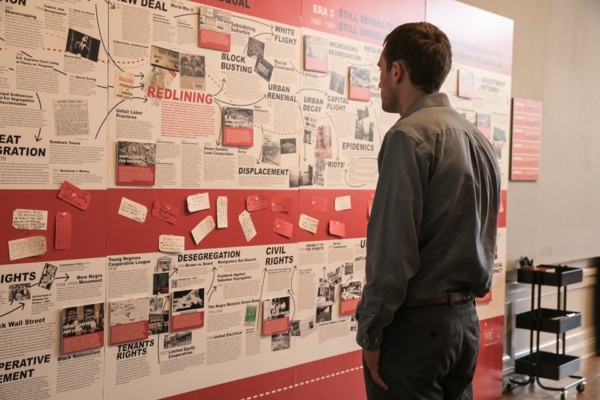 [Episcopal News Service] One of the most pervasive and insidious forms of systemic racism in the 20th century is still with us today: the once federally sanctioned practice of housing discrimination known as redlining. Its impact on American cities can still be seen – and even mapped – in the glaring inequities in access to education, health care and other resources based on where people live.

But many Americans don’t realize that the demographic and economic makeup of the neighborhoods they live in can be traced back to racist government policies from the 1930s, making it difficult to address the root causes of the de facto segregation seen in many cities.

That’s why Cleveland’s Trinity Cathedral, the seat of the Diocese of Ohio, invited a traveling interactive exhibit called “Undesigning the Redline” to set up shop there.

“This is a cathedral where the congregation and the staff really value our presence as being a part of the wider civic conversation,” said the Very Rev. Bernard J. Owens, dean of the cathedral.

The goal, Owens told Episcopal News Service, is “to create a space where folks can come in and really see the history for what it is and be changed by that. We’re not trying to tell people what to think. We’re just inviting them in to see what the history really is – how our city grid got made and how we forgot that process – so that we can actually begin to heal.”

In the 1930s, federal agencies created “residential security maps” of hundreds of cities for mortgage lenders, indicating which neighborhoods they considered safe investments and which ones they deemed more risky. Demographics were a significant part of the criteria; areas with high proportions of African-American, Jewish, Asian and Hispanic residents were labeled less desirable and banks were discouraged from investing in those areas. Neighborhoods were color-coded: green for “best,” blue for “still desirable,” yellow for “definitely declining” and red for “hazardous.”

Redlining made it extremely difficult for residents of the “undesirable” neighborhoods to buy homes – one of the causes of today’s racial wealth gap – and it lowered property values there, paving the way for “urban renewal” projects that often razed entire neighborhoods. 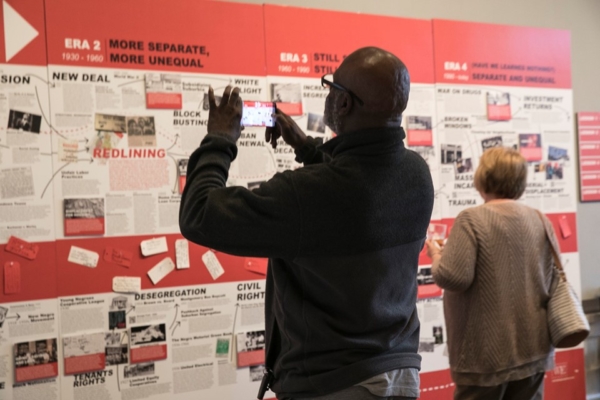 “Undesigning the Redline” connects the systemic racism of the past with the persistent inequities of the present. Photo: Trinity Cathedral via Facebook

The interactive exhibit, developed by a New York firm called Designing the WE, has previously been staged in other cities around the country that were affected by redlining. It includes the original 1930s maps distributed by the federal government, along with contemporary maps showing the lingering effects of redlining.

“You place a pin on the map where you live, and you can see visually how the cities were laid out and divided,” Owens said. “Then, it’s got maps that list outcomes based on where people live today, so maps that look at access to transportation and health care, poverty, all of which are overlaid over these maps that were put in place 80 years ago.

“‘Lingering effects’ barely begins to state it. It continues to shape and impact the people who live there today,” Owens added.

Owens said the exhibit has elicited personal stories from members of the diocesan and cathedral staff who have been impacted by redlining, and it’s changed the way he thinks about his own neighborhood.

“I can see the neighborhood where I now live, how it was zoned back in the ’30s and how that has impacted who my neighbor is today. And it’s important for me to look at that and now own that because that’s now my history too,” Owens told ENS. 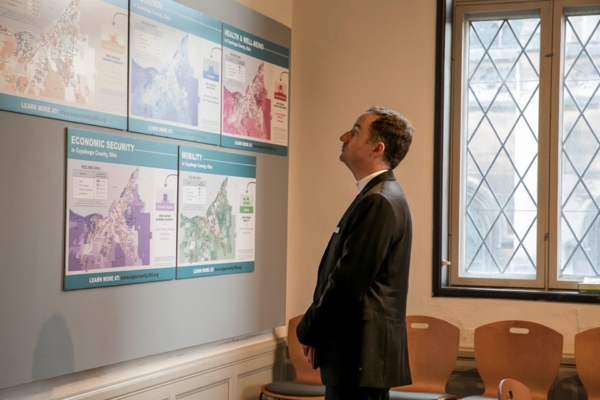 The exhibit is on view from Oct. 7 through Dec. 20, and it includes a series of presentations and forums and a trolley tour through the city to see some of the starkest examples of redlined neighborhoods.

Owens sees his cathedral as a place “where we can all come and learn,” and this exhibit is just one way of fulfilling that vision.

“You almost have to want to know about [redlining] to learn about it,” Owens said. “And my hope with exhibits like this – I feel a responsibility as a pastor to communicate to my congregation that this is real. And this shapes everything, like how we are fortunate or not fortunate to have wealth or not. … Reconciliation starts with the willingness to walk into the spaces and look at the history.”