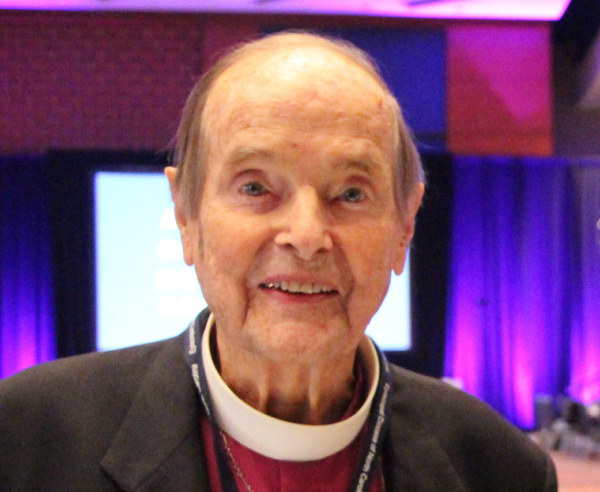 Born Sept. 7, 1927, in Lexington, Kentucky, to parents Robert and Elizabeth, Estill witnessed nine decades of history. He put his time to excellent use and was a talented raconteur, always ready with a story about one of his adventures to regale friends and strangers alike. An advocate for those marginalized by the church, Estill served his beloved Episcopal Church with vision and warmth.

“Bishop Estill was an exemplary leader who always lived fully and faithfully into his vocation as a servant of God and of God’s people,” the Rt. Rev. Sam Rodman, bishop of the Diocese of North Carolina, said. “He was a man of character who also had a gift for caricature. His cartoons captured the human foibles we all share, as well as a delight in the ways we live and love imperfectly, as agents of God’s grace. Bishop Estill’s humor was never more disarming than when he turned it on himself, which he often did.”

“Bob Estill had the strength of prophetic leadership wrapped in the old-fashioned charms of a Southern gentleman,” the Rt. Rev. Anne Hodges-Copple, bishop suffragan of the Diocese of North Carolina, said. “He took his role as defender of the faith seriously while also taking himself and the politics of the church lightly. He had a wicked sense of humor that could zing as well as disarm. Best of all was that he could laugh at himself while remaining steadfast in serving God and the church.”

After receiving his Bachelor of Arts at the University of Kentucky in 1949, Estill went on to earn his Bachelor of Divinity at Episcopal Divinity School in 1952 and later in life his Master of Sacred Theology (1960), Doctor of Ministry (1979) and Doctor of Divinity (1984) from Sewanee, the University of the South. He was ordained to the diaconate and the priesthood in 1952 by the Rt. Rev. William R. Moody, bishop of Lexington. On June 17, 1950, Estill wed Joyce Haynes, with whom he would share a 69-year marriage.

Estill’s service to the church began in his native Kentucky, where he served at St. Mary’s Episcopal Church in Middlesboro (1952-1955), Christ Church in Lexington (1955-1963) and Christ Church Cathedral in Louisville (1964-1969). He then served in the D.C. area for several years as the rector of St. Alban’s Parish (1969-1973) and a faculty member at Virginia Theological Seminary (1971-1976) before moving to Dallas, Texas, to serve as the rector of St. Michael’s and All Angels (1976-1980). From there he was elected bishop coadjutor of the Diocese of North Carolina in 1980. He succeeded the Rt. Rev. Thomas Fraser as the ninth bishop of North Carolina on Jan. 27, 1983, when he was consecrated by the Most Rev. John M. Allen. He served as bishop until his retirement in 1994.

As bishop, Estill sought to deepen and extend the ordained ministry of the church through a commitment to clergy continuing education, active encouragement of aspirants for Holy Orders, support for the ordination of women and the revival of the diaconate in this diocese. At the time of his retirement in 1994, he could look with justifiable satisfaction at the growth during his episcopate in the number of clergy resident in the diocese, including an additional 50 female clergy and 22 deacons.

“When Estill was still a priest in the Diocese of Dallas, he was an early and often lonely voice in support of women in lay and ordained ministry,” Hodges-Copple said. “He licensed my mother to be a lay chalice bearer at the Episcopal School of Dallas, a bold move in the early eighties that caused some to resign from the board of trustees. I chose to do my discernment process in the Diocese of North Carolina because I knew under Bishop Estill’s leadership I could just be my full and honest self without needing to defend women’s equality in general.”

Estill also sought to strengthen diocesan institutions and to honor long-standing mission commitments. He was a strong proponent of youth, campus and social ministries. A capital campaign conducted in the 1980s enabled the diocese to expand the facilities of the Camp & Conference Center.

In addition to his service to The Episcopal Church as priest and bishop, Estill also served as the chair of the Kentucky Human Rights Commission for 31 years and on the board of trustees of General Theological Seminary. He taught at Duke Divinity School, presided over the North Carolina Council of Churches, and chaired the Episcopal Church Board of Theological Education and the board of Kanuga Camp and Conference Center. He was also the author of “The Sun Shines Bright,” a memoir published in 2017.

“There was a graciousness to him that made one feel as though there was room to be yourself in his presence, a generous spirit that always left me feeling more sure of God’s love,” Rodman said. “In addition to our occasional visits, it was a great gift, recently, to be invited to celebrate with him a Sunday service that he offered faithfully once a month to the residents of Cypress Residential Community, where he and Joyce made their home. His devotion to God and to God’s people was his constant focus, and in this he embodied what it means to be faithful.”

Correction: An earlier version of this obituary included an error in the list of churches where Estill served.