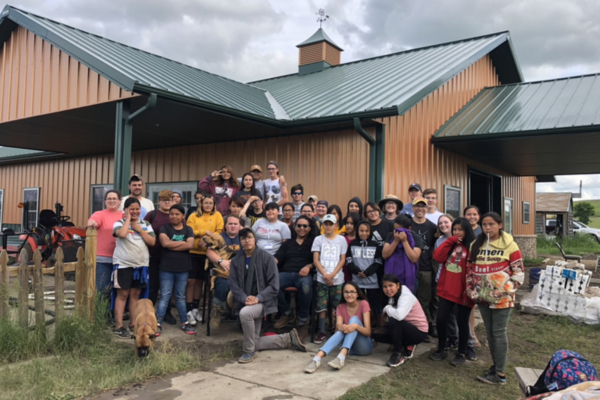 [Episcopal News Service] A new lodge at an Episcopal youth camp on the Standing Rock Sioux Reservation will double as a Native American interpretive center, highlighting local history and culture for visitors drawn to the region by an interest in the indigenous rights advocacy there.

The Episcopal Church was a prominent supporter of tribal demonstrators who in 2016 tried to block construction of part of an oil pipeline that they feared could threaten Standing Rock’s drinking water. Despite their objections, the Dakota Access Pipeline was allowed to cross the Missouri River just north of the reservation, and oil began pumping in June 2017.

Since then, the Diocese of North Dakota has welcomed various outside groups, interested in learning about the fight for indigenous and ecological justice, at its St. Gabriel’s Camp in Solen, North Dakota, a few miles west of the Missouri River on the northern edge of the reservation. Disciples of Christ youth groups have visited in each of the past two years. A group from Dayton University in Ohio visited in May, and another is coming in November from Concordia College in Moorhead, Minnesota.

The Rev. John Floberg, rector at the diocese’s three congregations serving Standing Rock, has worked with other church leaders to accommodate such pilgrimages as best they can, including by setting up visits with tribal officials and residents. That spirit of welcome is about to swell with the development of the 2,700-square-foot Star Lodge at the camp to serve as an interpretive center.

“We’re looking at trying to help people translate what is here to their own communities,” Floberg told Episcopal News Service.

The lodge at St. Gabriel’s Camp is named after the Rev. Terry Star, a 40-year-old deacon and member of Executive Council who died suddenly in 2014 while studying to become a priest. The Rev. Angela Goodhouse-Mauai, who was ordained as a deacon with Star in 2007, said in an interview with ENS that she thought of him as a brother.

“That was a big loss for us,” Goodhouse-Mauai said.

Star’s great-grandfather was Chief Red Hail, whose name had graced the camp’s previous lodge, until it was struck by lightning and burned down in August 2018. Now, with the help of a United Thank Offering grant and additional funds scheduled to be approved this week by Executive Council, the new Star Lodge will not only restore what was lost in last year’s fire. It also will incorporate geothermal heating and solar power, while expanding the diocese’s capacity to host youth groups in the summer and other church groups year-round.

The overall project costs about $280,000, Floberg said, and the structural shell of the new lodge already has been built with money received through the diocese’s insurance after last year’s fire. The $58,000 grant from United Thank Offering, or UTO, and about $20,000 from Executive Council will be used to complete the inside of the lodge and install the renewable energy sources.

Without the sustainable energy upgrade, the diocese wouldn’t be able to afford to keep the lodge open in the cold winter months, said Floberg, who also serves as president of the Diocese of North Dakota Standing Committee. The diocese already upgraded one of its Standing Rock churches, St. James’ Episcopal Church in Cannon Ball, to geothermal and was able to reduce its winter heating bills to about $130 a month, a small fraction of what propane heat had cost.

The size of Star Lodge is another big upgrade. Its meeting hall alone will be as large as the former lodge, and the diocese is in the process of converting the building’s additional space into a self-contained apartment with three bedrooms, bathrooms and a kitchen. The bedrooms will be able to house up to 16 guests, and the meeting hall can be converted to sleeping quarters to accommodate larger groups.

In addition to its primary use hosting youth groups, the former Red Hail Lodge was the site of trainings for local residents interested in becoming deacons and priests. Developing Native American leaders for service in the church will continue to be part of the mission at Star Lodge, Floberg said.

Star Lodge’s mission mirrors the dedication that its namesake deacon showed to the work of guiding young people in their spiritual development to become church leaders, Goodhouse-Mauai said. At the same time, she is heartened to have the expanded lodge as a resource for visitors “to learn the history of Standing Rock and learn from the people of Standing Rock.”

To that end, the diocese aims to develop racial reconciliation pilgrimages, with programs for 10 to 30 people at a time, through Star Lodge’s interpretive center. One of its core themes, according to the UTO grant application, will be the treaties signed more than a century ago between American Indian tribes and the U.S. government, emphasizing the promises made to the country’s native peoples.

The broader movement to draw attention to those promises gained steam on Oct. 14 as the federal holiday known as Columbus Day was celebrated by a growing number of Americans as Indigenous Peoples Day.

“Every acre of this land on this continent was already spoken for,” Floberg said. “There was no vast wilderness where there weren’t people already inhabiting territory. … We’re all on Indian land.” That makes it all the more important, he added, for the church to take the lead in learning about and listening to America’s indigenous residents.