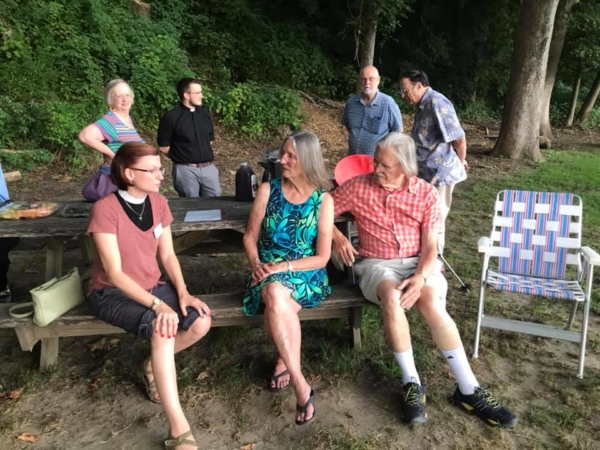 [Episcopal News Service] For many years, reorganizing church structure and governance to be more efficient and effective has been suggested as a way to adapt to the societal changes The Episcopal Church is contending with. But the record of progress toward that goal has been mixed, at least on a churchwide level.

The Episcopal Church in Connecticut has taken its own action on structural reform by replacing its 14 deaneries – which were seen as outdated – with six regions, each served by a “region missionary” who fosters collaboration and engagement in the parishes of that region.

Two years after the first missionaries were hired, their positions have gone from part time to full time and the program has been hailed as a success.

“The people and the parishes have faithfully chosen to realize the truth that the church and the world is changing … and there’s only going to be more change afoot,” the Rt. Rev. Ian Douglas, bishop of Connecticut, told Episcopal News Service. “And instead of licking our wounds or wallowing in loss and decline, the people of The Episcopal Church in Connecticut have said, ‘Let’s look forward in faith and try on new ways of being the body of Christ.’”

The traditional deanery model – which hadn’t been adjusted since 1984 – had become dysfunctional, diocesan leaders said. When asked what wasn’t working about the deanery model, the Rev. Timothy Hodapp, canon for mission collaboration, couldn’t help but laugh.

“We had 28 participating members in what was then called the diocesan Executive Council, so that was two representatives from each of the 14 deaneries,” Hodapp said. “And of those 14, three were actually on the ground, active, doing a lot of really great work. The others – it would go from doing great work on one end to not participating at all on the other, and then kind of middling in between those two extremes. And so you might have your council come together and barely get a quorum, and the work of the council was oftentimes rubber-stamping what bishops and canons had already done.”

Even though it was apparent to some in the diocese that the deaneries overall were not adding to the life of the church or the communities they served, it took a fresh set of eyes to make substantive changes in the oldest organized diocese in the United States. Douglas, who became diocesan bishop in 2010, was the first to be elected from outside the state since the diocese was created in 1784.

“So the Holy Spirit was up to something here in Connecticut as far as wanting change,” Douglas said.

The need for a change started to become clear during the work of the Task Force for Reimagining The Episcopal Church in 2013 and 2014. The task force, also known as TREC, eventually issued a report that recommended consolidating church governance structures. Some the most significant recommendations, such as a unicameral General Convention, still have not been adopted, but TREC’s work inspired the diocese to start its own task force in 2014.

“The good work that was begun by the general TREC initiative, I think, was too bold and too far-reaching for the whole church, which is why it really wasn’t picked up at General Convention,” Douglas said, “whereas we in Connecticut said, ‘Boy, sure makes sense to us. Why don’t we do it?’”

The TREC report inspired the “four C’s” that would eventually become the job description of the region missionaries: catalyze, connect, convene and build capability. Redrawing the deaneries into larger regions required the diocese to examine how each unique corner of the state has evolved over time, which ultimately yielded a surprisingly familiar result.

“As we devised where these lines might be, to siphon off which chunks of villages are going to be in a region, we went back into the archives and we tried several different iterations,” Hodapp explained. “But following the trunk highways and the river valleys, etc., we parsed it, and it almost matched perfectly to 1843 archdeaconries; there were six of them. And here it was. So we returned to our legacy in a real sense.” 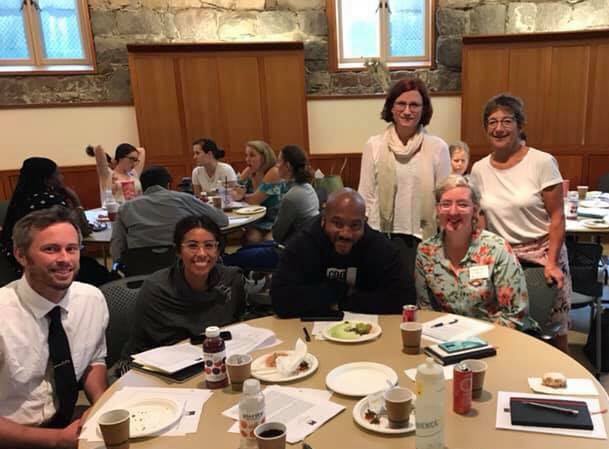 Along with consolidating the deaneries into regions and establishing the region missionaries, the diocesan task force also recommended abolishing all committees and commissions that are not canonically required. Those were replaced with “ministry networks,” but it’s not just a change in terminology; in keeping with the spirit of the task force, these new groups are organized from the bottom up, not from the top down. If any group of Episcopalians wants to act together on a particular issue, they can form a ministry network and get support from the diocese.

“There’s no application for recognition, there’s no canonical authorization; just do it,” Douglas said. “And if people say, ‘Well, how do we do the work, say, in prisons? Where’s the diocesan committee on prison ministry?’ We say, ‘Go and do it. Organize yourself. You don’t have to wait for us to give you authority. You have the baptismal authority you need.’”

Two teams of about 30 people worked on the topic over the course of two years, Hodapp said, and when they put every committee and commission up on a wall, they realized what had to be done.

“What’s common to all of this?” Hodapp said. “And why do we have it established as a group that needs to be meeting with Robert’s Rules of Order and taking notes when we need to be more flexible, and we need to network differently, and we need to be in a world that has changed completely around us?”

Each region gathers for a convocation at least once a year, during which they select one layperson and one clergy member to serve on the diocesan Mission Council – which replaced the Executive Council – along with a representative from each ministry network.

The task force’s plan was adopted enthusiastically at the 2015 diocesan convention, and the region missionaries were the last piece to be implemented, with the first cohort of three priests and three laypeople hired in 2017. Their task, Douglas said, is not to be a stopgap to help keep struggling churches in business, although they do play an important role in the 67 percent of parishes without full-time clergy. Their task is to rethink how the churches operate in their communities, Hodapp says.

“Who else needs to be at the table? And that doesn’t mean just Episcopalians. But who are our allies within this village or these three villages? How do we really engage the neighborhood in a meaningful way, for what it needs for right now?” Hodapp said.

Maggie Breen, the missionary for the sparsely populated Northeast Region, spends each Sunday at one of the region’s 16 parishes, and every Sunday is different.

“I have been bringing a map of the town” in which each parish is situated, Breen told ENS. “And I’ll indicate where the parish is in the town, and I’ll ask people to think about the town and tell me what things have they noticed that break their heart and what things have they noticed that really bring them joy. And we map those out, and then we brainstorm, What could we do about any of those?”

One of Breen’s accomplishments in her region is a lay preaching class, which had previously been done in the Northwest Region. She also organizes a series of “Crafting as a Spiritual Practice” days, in which participants – including members of other churches – connect over their hobbies and their faith.

The North Central Region’s missionary, the Rev. Erin Flinn, has organized a film and conversation series on racial justice and is working to connect wardens from different parishes so they can feel supported and share their experiences. She also is focusing on enabling parishioners to start mission work on their own.

Flinn, who was ordained to the transitional diaconate in June, said the regional model has been particularly beneficial to the small parishes, helping them join forces and accomplish more together.

“We have several small parishes that are now collaborating in new ways,” Flinn said. “The mentality of regions and networks has really been a lifeline to our smaller communities that don’t have a lot of resources and only have half-time or quarter-time clergy.”

The region missionaries have organized and facilitated mission trips, spiritual hikes, communication workshops, garden projects, paddling trips, book groups and more, and they also serve as a liaison between parishes and the diocese.

Breen and Flinn were both in the original cohort of missionaries who started in 2017. After their two-year contract expired, three continued as full-time missionaries, while the other three chose not to stay and were replaced by new hires.

The three new RMs recorded for @coffeehourpod this morning! Be on the lookout for the podcast next week. #episcopal #episcopalct #ecct #southwestecct #regionmissionary

Hodapp says the diocese has gotten queries from other dioceses interested in their structural reforms. He says his vision for the future of the regions and the region missionaries is “to be open-minded and to see where God is going to take us. To fan into flame what’s working, to fan into flame experiments, trying things on, watching things happen and fall apart, figure out what worked and what didn’t.”

“What I’m learning,” Flinn said, “is that our churches are actually doing more than we realize. We just [weren’t] good at telling each other what we’re doing. … That was the biggest discovery.”