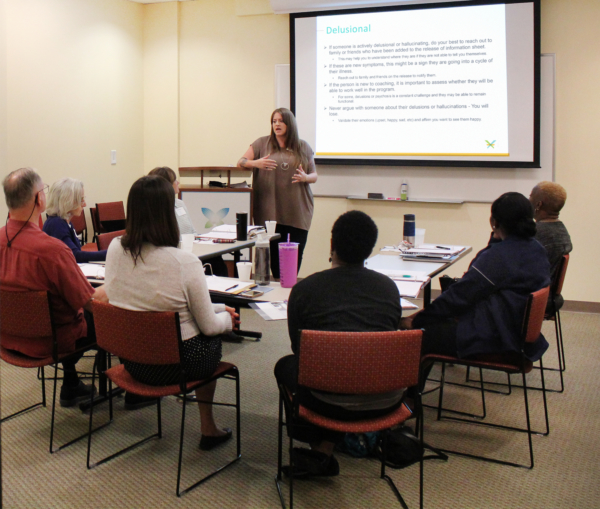 Director of Clinical Services Madeline Stiers discusses one-on-one dynamics during a training event at the Hope and Healing Center and Institute on the campus of St. Martin’s Episcopal Church in Houston, Texas. Photo: HHCI

[Episcopal News Service] It’s a scene familiar to many clergy: Someone walks into the church office wanting to speak to a priest, clearly in distress. Within a few minutes of conversation, it becomes clear that the person is suffering from a mental illness.

For many priests who want to help a person seeking healing but simply aren’t equipped to deal with mental illness, this experience can be agonizing – and can end with the mentally ill person feeling more dejected than before.

But at St. Martin’s Episcopal Church in Houston, the scene has been rewritten. 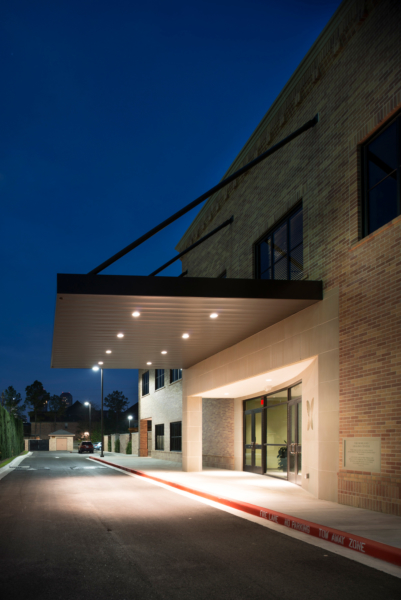 The Hope and Healing Center and Institute is now an independent nonprofit housed on the campus of St. Martin’s. Photo: HHCI

When someone walks in needing mental health care, a priest can simply walk them next door to the Hope and Healing Center and Institute, where the person can be evaluated and receive a comprehensive array of services, all for free. And the center’s training programs are now helping clergy and church leaders around the country identify and respond to mental illness in their communities.

Since it was established by St. Martin’s in 2012, the Hope and Healing Center and Institute has grown rapidly to fill a significant portion of the unmet need for psychiatric and addiction treatment in Harris County, where the county prison is the largest mental health facility in Texas. Today, the center on St. Martin’s campus serves over 800 people a week at no cost, in addition to the patients it refers for treatment to its network of external providers.

How did a church start such a successful and complex operation?

For starters, St. Martin’s isn’t your typical church. With over 9,500 members – including Barbara and George H.W. Bush, whose funerals were held there – it’s the largest parish in The Episcopal Church and has abundant financial resources. When the Rev. Russ Levenson became rector in 2007, he was drawn to this sentence in the parish profile: “We want to be known as a church that increasingly helps those broken by life’s circumstances.” 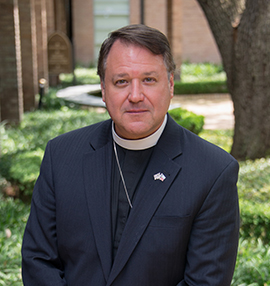 “And I looked at my wife and said, ‘Now that’s something that interests me,’” Levenson told Episcopal News Service.

St. Martin’s already had long-running mission programs serving the hungry and needy of Houston, in partnership with other Episcopal churches. But its location in a wealthy enclave of the city didn’t make sense for, say, an on-site soup kitchen. Soon after Levenson took the helm, the church bought the property next door and thought about how they might use it to serve the community.

“It doesn’t take long to be in a church to realize those issues that every church deals with: family dysfunction, aging parents, addiction, mental and emotional health care, depression,” Levenson said. “We already had several support and recovery groups on campus. … So we said, have we ever kind of put all those things together under the umbrella of the church? … What would it look like if we developed a healing agency that would bring together the facets of emotional, mental, physical and spiritual health?”

With support from big names like the Bushes, former Archbishop of Canterbury George Carey and actor Sam Waterston of “Law & Order,” St. Martin’s raised enough money to build the Hope and Healing Center and Institute, which features treatment rooms, lecture halls, teaching laboratories and meeting spaces. Under CEO Matt Stanford – an expert in the intersection of faith and mental health – the center has expanded and is now an independent nonprofit with a staff of about 25 people, though it is still housed on St. Martin’s campus.

With his understanding of the intertwined nature of mental, physical, spiritual and relational health, Stanford relies on an ethos of holistic healing drawn from Scripture, such as Luke 2:52: “And Jesus grew in wisdom [mental] and stature [physical], and in favor with God [spiritual] and man [relational].”

“It’s exciting to see a faith community say, here’s a problem that society is desperately, desperately looking for an answer to. And we can start something and allow it to grow, and it can engage the culture and the society, both for the faith and also to relieve suffering,” Stanford told ENS.

The Hope and Healing Center and Institute offers individual treatment for severely ill patients, mental health coaching, tele-psychiatry, case management and 38 weekly support groups. People with less serious concerns can be evaluated and referred to one of the nearly 1,000 pre-screened partner providers within the Houston area. Treatment is designed to be as holistic as possible, in order to get the patient on a path to sustainable wellness; therapists, case workers and psychiatrists collaborate on the course of a patient’s treatment. And clients are encouraged to talk about their spiritual health as much as they want to.

“We’re engaging them at a level beyond just the fact that they are a set of messed-up symptoms or an illness. We’re engaging them as people. And we recognize that people have spiritual issues and they often want to talk about those,” Stanford said. “Our therapists all work with the individual from a faith perspective. The spiritual discussions and the discussions in therapy are part of the same integrated curriculum. … And so, for instance, recognizing that you have a purpose and developing a purpose in your life, along the lines of what God has for you, is just an important part of the therapeutic process.”

Too often, Levenson says, churches offer spiritual help to those suffering from mental illness without connecting them with the substantive treatment they need to get better.

“There are churches that think that all people need is spiritual health,” Levenson said. “All they need is somebody to hold their hand and pray with them. Well, that doesn’t help a person who’s seriously addicted or has a serious mental or emotional diagnosis. Yes, they need the hand of God, but yes, they need therapeutic care! We’ve got clergy out there who are acting like they’re therapists, and they’re not. They’re not trained to do that. Frankly, I’m happy to give people Bible verses and pray with them, but that alone is not going to help somebody and sending somebody away with only that is, in my mind, irresponsible.” 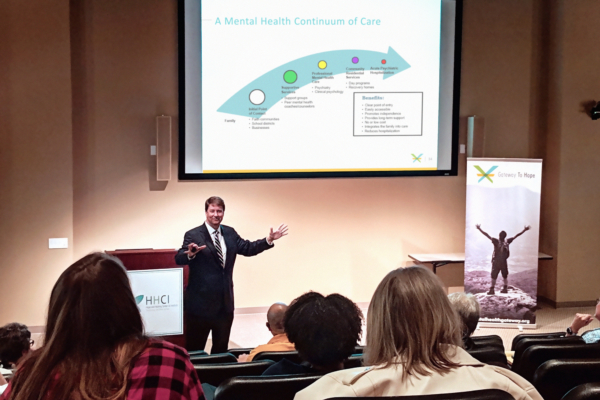 CEO Matt Stanford discusses a mental health continuum of care during a training event at the Hope and Healing Center and Institute. Photo: HHCI

Aside from treating patients, the center at St. Martin’s focuses on training and educating mental health professionals and faith leaders. Its Gateway to Hope training program addresses the problem of clergy and parishioners being unequipped to identify and address cases of mental illness in their congregations.

According to the National Comorbidity Survey, nearly one-quarter of people who are looking for help with a mental health condition will go to a clergy member first, before seeking help from psychiatrists or general practitioners. Gateway to Hope trains clergy and parishioners to recognize and respond appropriately, embracing their role as the front lines of the mental health treatment system.

People in faith communities need “to know how to properly introduce that person into the mental health system,” says center board chairman Lee Hogan, “to recognize whether or not this is someone who’s a danger to themselves that day, or whether it’s someone who needs counseling, or whether it’s someone who needs a support group. And so where do you send them? The overwhelming majority of priests and ministers and rabbis and imams and so forth simply don’t have the ability and the training to recognize the symptoms.”

But now many in the Houston area and beyond do. In 2018, 950 people received the Gateway to Hope training. Demand has grown for the program. Recently, Stanford traveled to Hawaii and trained 350 people across 40 different churches, and previously he trained 400 Lutheran pastors in Indiana. The Hope and Healing Center and Institute is making many of the materials available online and hopes to spread the curriculum even further, but for now, it is primarily focused on improving access to care in the Houston area.

“When you stand in our building,” Stanford said, “and you face the sanctuary, which is to the west, we’re a ministry of St. Martin’s. And when you turn around, and you face out to the city, we are a mental health and training center that impacts all of Harris County.”

“This is an opportunity for the church to be, as it was in its beginning days – you know, the church was the hospital in the early days,” Levenson said. “And this is a chance for the church to fulfill part of its initial mission, to be a healing agent.”