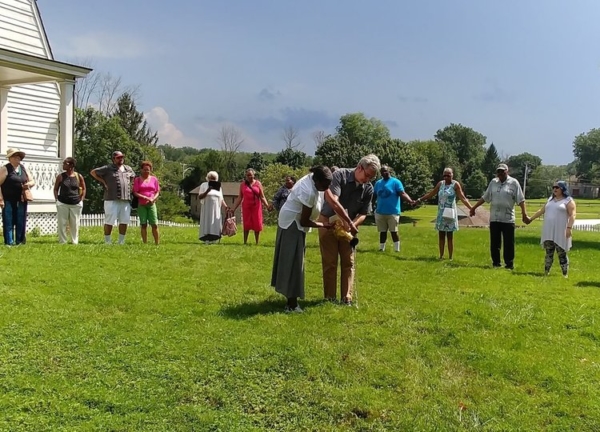 [Episcopal News Service] Though a number of Episcopal churches have worked to acknowledge and repent for their congregations’ historic involvement with white supremacy or slavery, it’s rarely as personal as it is for the Rev. Natalie Conway and Steve Howard of Memorial Episcopal Church in Baltimore.

Conway, a deacon serving the parish, discovered last year through a family member’s genealogical research that their ancestors were slaves owned by the family of the man who founded the church in 1860, The Baltimore Sun reports.

It got even more personal when she realized that Howard, a parishioner she had known for years, was descended from that slave-owning family.

“My initial reaction was, ‘Why should I stay at a place that enslaved my ancestors?’” Conway told the Sun.

But she did stay, and the result has been a transformative process of reckoning and healing for the mostly white church. Over the past several weeks, the parish has held a series of services and events that have examined its long history of promoting racism – which lasted into the 1960s – and sought to bring the community together in a spirit of atonement and forgiveness.

The Rev. Grey Maggiano, who has made racial reconciliation a priority during his three years as Memorial’s rector, was as surprised as Conway was to learn of the church’s painful history.

“When the truth came to light, the Rev. Conway was shocked. And so were the rest of us,” Maggiano wrote in a letter to the congregation. “Frankly, as a church we did not know what uncovering this historical tie would mean, for Natalie, for Memorial, for any of us. However, we knew it was incumbent on us to share the truth, and prayerfully engage with it.”

That engagement took the form of a pilgrimage to the historic Hampton plantation in Towson, Maryland, a grand estate that was once owned by the family of the Rev. Charles Ridgley Howard, the founding rector of Memorial and a Confederate sympathizer. When Howard was buried there in 1862, there were more than 400 slaves on the property, including the Cromwell family, the Rev. Conway’s ancestors.

More than 50 members of Memorial and the nearby Church of St. Katherine of Alexandria – a primarily African American church established as an alternative to white-only parishes like Memorial, which did not admit black members until 1969, according to the Sun – toured the Howard estate on Aug. 18. 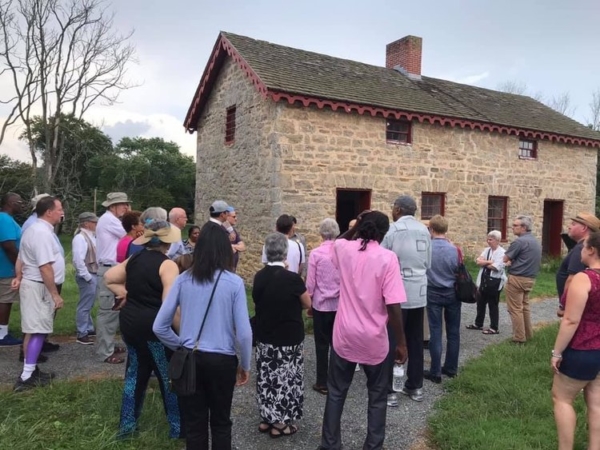 “We saw the grandeur of the mansion and the beautifully manicured lands. We visited the graveyard where the Rev. Charles Ridgley Howard is buried. We saw paintings of his grandparents and his in-laws. We learned what happened to only some of the enslaved persons held at Hampton. We saw rooms where the Rev. Charles Ridgley Howard and his family might have slept – and in contrast where Deacon Natalie [Conway]’s family might have slept. We saw the chains used to hold people,” Maggiano wrote.

At the end of the tour, standing in a yard next to the slave quarters, the group said prayers, and holy water was consecrated. In a ceremony that Conway helped plan, she and Steve Howard – the parishioner who is descended from the Rev. Charles Ridgley Howard – poured the water into the ground together.

The act represented the “healing and restoration of relationship between two very different families, and a public symbol of who Memorial Church is today,” Maggiano wrote.

Howard told the Sun he always knew that he was descended from slave owners but had previously “kept it at an intellectual level,” and examining that history more closely felt like “a punch in the gut.” But he and other congregants said it’s also been illuminating and necessary.

“This has been a giant step forward,” he said.

During a later Sunday service, Conway and Howard led a “litany of reconciliation” in which the parish prayed for forgiveness for the sins of slavery and racism. The church posted a public apology to the families who were enslaved by its rectors. And on Sept. 15, it hosted a community conversation on the legacy of slavery in Maryland, inspired by The New York Times’ 1619 Project.

Similar efforts to recognize and heal from the history of slavery have taken place recently among Episcopal churches in the region, like a pilgrimage across Virginia’s “Slavery Trail of Tears” in August, Virginia Theological Seminary’s establishment of a slavery reparations fund and an upcoming pilgrimage to Jamestown, Virginia, where the first person of African ancestry born in the 13 British colonies was baptized. In June, the Rt. Rev. Eugene Taylor Sutton, bishop of the Diocese of Maryland, testified in support of a slavery reparations bill in a congressional hearing.

Memorial’s clergy and congregants will continue to have conversations about the church’s history; Maggiano told the parish that the pilgrimage to the Hampton estate was only “the beginning of something new.”

“Our church acknowledges our collective sin of slavery, and continues to work toward reconciliation through crafting new relationships, restoring things profaned, and hopefully coming back into right relationship with God as well,” he wrote.

“It’s not about shaming or blaming anyone for the past,” Conway told the Sun. “It’s about telling the truth. My ancestors and this church are one, and that story needs to be told.”