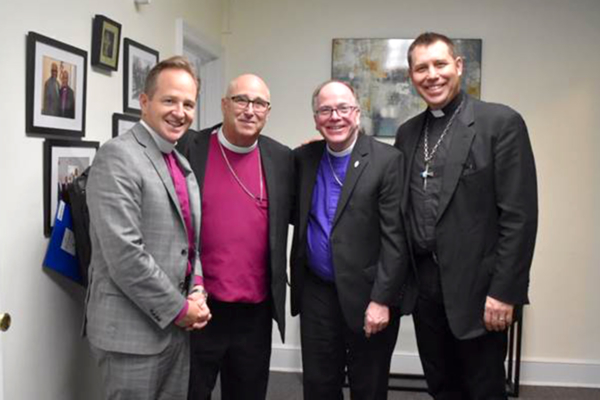 [Episcopal News Service] Five Episcopal bishops traveled to Capitol Hill in Washington on Sept. 24 for meetings with senators and representatives from their dioceses to advocate for preserving the U.S. government’s refugee resettlement program at a time when the Trump administration is considering cutting the program further.

They were accompanied by staff members from The Episcopal Church’s Office of Government Relations, which organized the visits. They met with both Republicans and Democrats, and their appeals carried the weight of the church’s decades of experience resettling refugees in the United States through Episcopal Migration Ministries, or EMM.

“This is certainly not a partisan issue, from my standpoint,” Hunn told Episcopal News Service after concluding his meetings. “It’s a moral issue of how we care for the stranger among us.”

Thank you @RepDebHaaland for meeting with Bishop Michael Hunn from the Episcopal Diocese of the Rio Grande on the critical need for refugee resettlement! #EpiscopalAdvocacy pic.twitter.com/yuyK7M2QuJ

Hunn, whose diocese encompasses New Mexico and the westernmost region of Texas, met personally with New Mexico Reps. Deb Haaland and Xochitl Torres Small, both Democrats, and with someone from the office of Texas Sen. John Cornyn, a Republican. Sparks told ENS he met with Indiana’s two senators, Mike Braun and Todd Young, both Republicans, as well as three representatives from districts in his diocese.

“This is where God’s called me to be,” Sparks said after the meetings. “And anything I can do to support them to address this important program of resettling refugees, I stand ready to do so.”

This morning Bishop Doug Sparks of @EDofNIN connected with @SenatorBraun and @SenToddYoung on Capitol Hill to discuss advocating for refugees and refugee resettlement #EpiscopalAdvocacy pic.twitter.com/68F0j2mwhN

EMM is one of nine agencies with contracts with the U.S. State Department to resettle refugees fleeing war, persecution and other hardships in their home countries. The Episcopal agency has resettled more than 95,000 refugees since the 1980s, providing a range of services for these families upon their arrival in the United States, including English language and cultural orientation classes, employment services, school enrollment and initial assistance with housing and transportation.

The number of refugees allowed into the United States each year is based on a ceiling set each year by the president’s administration. For most of the past two decades, that cap has remained between 70,000 and 90,000, and under President Barack Obama, it rose as high as 110,000 in the 2017 fiscal year. President Donald Trump’s administration has reduced the number to just 30,000 for the fiscal year that ends Sept. 30, 2019.

The administration has not yet announced a new refugee resettlement ceiling, but reports have suggested Trump and his advisers are considering sharper cuts – possibly even dropping the cap on refugees to zero.

EMM once oversaw 31 resettlement affiliates in 26 dioceses, but now that number is down to 13 affiliates in 11 dioceses. The ongoing uncertainty over future resettlement levels poses additional challenges for EMM and the other eight agencies.

“At a time when refugee admissions to the United States are under constant threat, it is more important than ever that we raise our collective voices and advocate for a robust resettlement program,” said Kendall Martin, EMM’s communications manager, in an email to ENS. “The Episcopal bishops advocating for the refugee admissions program honor the rich legacy of Episcopal Migration Ministries and provide a critical witness by living our mandate delivered by Jesus himself to ‘welcome the stranger.’”

Thank you @RepCarolMiller for meeting with Bishop Klusmeyer of the Diocese of West Virginia and Canon C.K. Robertson today! pic.twitter.com/0Wy0ZP93Yb

The five bishops in Washington to advocate for EMM and the refugee resettlement program gathered in the morning for a briefing, in which Office of Government Relations staff members outlined talking points that invoked church policy positions as determined by General Convention resolutions. The bishops also received biographical information about the lawmakers they were meeting.

“We were delighted to have the bishops join us on Capitol Hill,” said Rushad Thomas, migration policy adviser in the Office of Government Relations. “We have no better refugee advocates than the bishops who serve these communities on the ground. It is vital that the church speak with one voice in support of our refugee brothers and sisters.”

For some of the bishops, this was their first time taking The Episcopal Church’s advocacy directly to federal lawmakers, though Brown said he has some experience doing the same at the state level. 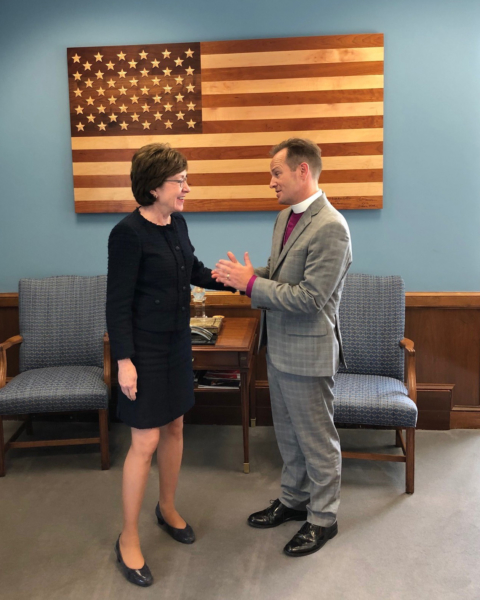 “One of the things that’s true in smaller states is that the people that serve in public policy, whether it’s at the statehouse or in Washington, are a little more accessible,” Brown said. He met earlier in the day with Maine Sen. Angus King, an independent who caucuses with Democrats, and Rep. Jared Golden, a Democrat. After speaking with ENS, he planned to meet with Sen. Susan Collins, a Republican, and Rep. Chellie Pingree, a Democrat.

Brown identified two main topics he and the other bishops sought to discuss with the lawmakers: EMM’s long history of facilitating the refugee resettlement program and the church’s concerns about the cuts in the number of refugees allowed in the country.

The bishops also emphasized that refugees pose no elevated threat to Americans, but rather they tend to quickly become productive members of their new communities. “These individuals have gone through the most extensive vetting process you can imagine,” Sparks said.

The bishops noted there is bipartisan support for refugee resettlement, and Brown praised the work of the Office of Government Relations to keep such issues in front of lawmakers.

“The Office of Government Relations has done such a beautiful job of preparing us,” Brown said. “I’m so impressed with the care that this office is doing to tell the story of faith to our policymakers.”