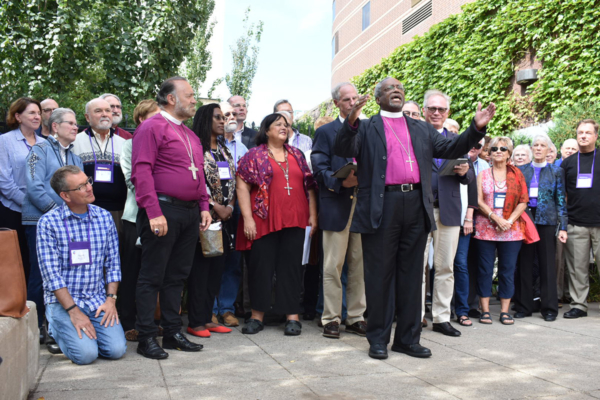 [Episcopal News Service – Minneapolis, Minnesota] The House of Bishops wrapped up its fall meeting here on Sept. 20 after spending four days studying, discussing and, in some cases, acting on many of the most important issues facing The Episcopal Church.

Racial reconciliation? A draft report on white supremacy was circulated by the Theology Committee on Sept. 19, prompting a lively and, at times, even tense discussion.

Care of creation? The bishops gathered briefly on the final day outside the Courtyard by Marriott hotel near downtown Minneapolis to stand in solidarity with youth-driven climate change strikes around the world. (Coverage of the climate strike, including comments from Presiding Bishop Michael Curry, can be found here.)

“Our house here has been blessed for a long time to be moving in that direction of becoming that to which we aspire, that beloved community,” Minnesota Bishop Brian Prior said in his sermon during the final morning’s Eucharist.

Prior referenced Mark 8:34-38 in which Jesus commanded his disciples to “take up their cross” and follow him. “We continue to have work to do,” Prior said. “We’re working at moving into that place in this house where we have experienced sexism, racism, homophobia, classism, where we experience all those things still today and lots of ways folks feel marginalized.

“All of those things for us are things that we need to set down, so we can collectively pick up our cross.” 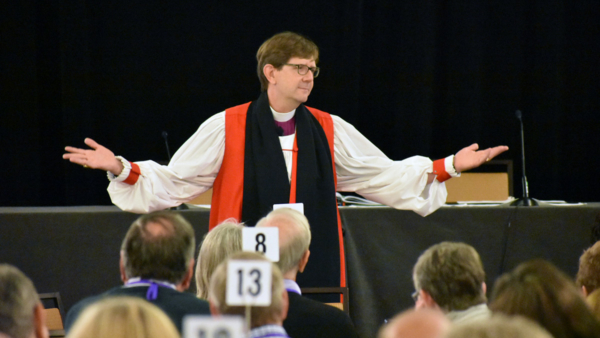 Minnesota Bishop Brian Prior preaches Sept. 20 at the closing Eucharist of the House of Bishops meeting in Minneapolis. Photo: David Paulsen/Episcopal News Service

About 130 bishops were registered to attend this House of Bishops meeting for some or all of the four days. Four bishops-elect also joined the meeting, as did a bishop from Tanzania, Central Tanganyika Bishop Dickson Chilongani, who was a guest of the Diocese of New York bishops.

The bishops typically meet twice a year as a house, in spring and fall. The next meeting is March 10-13, 2020, at Camp Allen in the Diocese of Texas.

Same-sex marriage, often a central topic for debate at past gatherings of churchwide bodies, was taken up only indirectly in Minneapolis, partly reflecting the fact that General Convention 2018 had virtually settled the matter of making marriage rites available to all couples who request them in all domestic dioceses.

The Diocese of Albany remains the one exception, and news broke on Sept. 18 at the House of Bishops’ meeting that Albany Bishop William Love had been referred to a hearing panel to face possible disciplinary action under the church’s Title IV Canon because he continues to block same-sex marriage in his diocese.

“I greatly appreciate the Reference Panel’s decision to expedite the process by referring this matter directly to the Hearing Panel, where I will have the opportunity to address the concerns raised,” Love said in a message to his diocese.

Same-sex marriage also figured into the bishops’ discussions of the upcoming Lambeth Conference 2020, a gathering in England of all active bishops in the Anglican Communion. Archbishop of Canterbury Justin Welby chose to invite openly gay and lesbian bishops but not their spouses, so part of the Episcopal bishops’ planning has involved deciding how to respond to that exclusion.

Welby’s decision is expected to affect at least three Episcopal bishops with same-sex spouses: New York Bishop Assistant Mary Glasspool, Maine Bishop Thomas Brown and the Rev. Bonnie Perry, who will be consecrated bishop of Michigan in February. All three attended the House of Bishops meeting in Minneapolis with their spouses.

Brown told Episcopal News Service on the first day of the meeting that he and his husband, the Rev. Thomas Mousin, were still deliberating over whether to go to England for the Lambeth Conference.

“We continue to be in prayer as a family, along with other bishops in the world … who have reached out arms of support and encouragement,” Brown said.

The House of Bishops spent part of the afternoon Sept. 19 in closed session so bishops and spouses could discuss how they planned to respond individually and collectively to Welby’s decision. That discussion produced a message that was approved Sept. 20 by the bishops that said the Lambeth Conference had “become the occasion for a mixture of joy and sorrow, hope and disappointment.”

While talk of the Lambeth Conference loomed over the House of Bishops’ meeting from the first day, another two words – sometimes spoken, otherwise only alluded to – were on the minds of the Episcopal bishops from the start as they pondered the future of the church, its size, makeup and mission.

Those are the surveys completed by Episcopal congregations that provide The Episcopal Church’s official count of active members, average Sunday attendance and other metrics for gauging church vitality. The latest numbers were released this month. Year after year, they have shown a denomination in decline, mirroring a story being told at other mainline Protestant churches in an increasingly secular United States.

Presiding Bishop Michael Curry, in his sermon at the House of Bishops’ opening Eucharist on Sept. 17, acknowledged the numbers have not been good, and he nurtured no expectations for a sudden rebound. Instead, he sought reassurance in the immutable Christian values embedded in Scripture.

“I don’t know why everybody goes crazy every year,” he said. “Yeah, the numbers are going down. So what? Look to the rock!” Curry said, quoting from Isaiah. “We’re all followers of Jesus!”

The declining numbers provided sober context for the bishops’ sessions Sept. 18 with Hamilton, the Methodist pastor, who leads Church of the Resurrection in Kansas City, Missouri. Membership at Resurrection has grown to top 20,000 across five campuses, and Hamilton offered insights from his successes centered on the theme “Leading Beyond the Walls.”

Some of Hamilton’s practical advice verged on the obvious. Thriving congregations have effective pastoral leadership, skilled preaching and missional outreach to the community, he said. He also pressed the bishops to coach clergy to become better leaders in their congregations and their communities.

“I’d guess at least half of all clergy are introverts,” he said at one point. “Except the job requires us to be extroverts.”

Good leaders also bring about “chaos and change,” he said. Moving a congregation or diocese forward requires a leader to make hard, uncomfortable decisions, to engage in “discernment by nausea.”

“Change, innovate, improve or die,” Hamilton said, again emphasizing that this is the job of faith leaders. “We set the tone for what happens. … You can’t lead people to where you’re not going.”

The Rev. Adam Hamilton, pastor of the United Methodist Church of the Resurrection, speaks to the House of Bishops on Sept. 18, using analog and digital versions of an Elvis album to make a point about the need for churches to “change, innovate improve or die.” Photo: David Paulsen/Episcopal News Service

The bishops returned to the question of church vitality on Sept. 20 as they welcomed members of the House of Deputies’ State of the Church Committee. Part of the committee’s work, based on a 2018 General Convention resolution, is to help “design a simplified parochial report relevant to the diversity of The Episcopal Church’s participation in God’s mission in the world.”

But the Rev. Gay Clark Jennings, House of Deputies president, also asked the committee to seek new ways the church can experiment, innovate and adapt to its 21st-century context. For that purpose, the committee members introduced themselves to the bishops and then fanned out to sit at tables around the ballroom to foster discussions, share ideas and record the results.

That morning session set the tone for a particularly busy final day, which included an afternoon business session and small group discussions on a range of topics, including refugees.

Minneapolis has a large Somali refugee community, and some of the bishops spent part of their afternoon meeting with the head of a Minneapolis agency that helps to resettle refugees in the area through Episcopal Migration Ministries, or EMM, one of nine agencies with federal contracts to do that work on behalf of the U.S. State Department.

The Trump administration has cut sharply the number of refugees admitted to the United States for resettlement each year, and reports have suggested that number will be cut further in the next fiscal year, which begins Oct. 1.

Also in the afternoon, a group of nearly 100 bishops gathered outside the hotel and offered words of support for the global climate change strikes. Curry, California Bishop Marc Andrus and Western Massachusetts Bishop Douglas Fisher spoke of the call as Christians to care for God’s creation.

“We are committed to this work. It is our hearts, our hands and our lives,” Andrus said.

This meeting of the House of Bishops highlighted the changing face of a body that is slowly adding more women and people of color. Several new members attended their first meeting this week, and one of them, West Tennessee Bishop Phoebe Roaf, preached at the Sept. 18 Eucharist.

Roaf admitted sometimes feeling overwhelmed in her new role as bishop, but she urged her fellow bishops not to let the pressures of the world immobilize them.

“There are so many silences, in our church and in our country, in need of being broken,” Roaf said. And while the numbers in the parochial report data may be down, she said, “I’m actually energized.”

“I’m kind of fired up about this, brothers and sisters. I mean, what an amazing opportunity for our church in this moment, to get real, to engage in fierce conversations, to create a safe space where people can come as they are and be engaged in open and honest dialogue.” 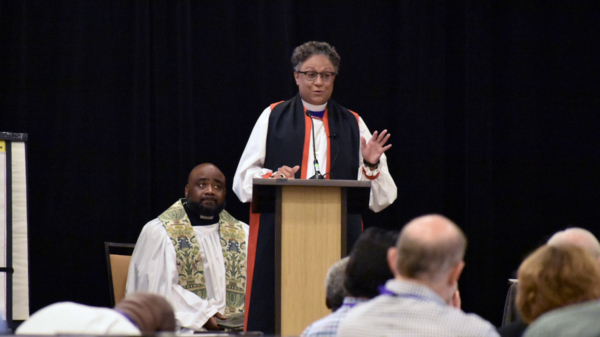 That spirit carried through to the discussion of white supremacy on Sept. 19. In addition to receiving the draft report produced by the Theology Committee, the bishops heard from the Rev. Altagracia Pérez-Bullard, a theology professor at Virginia Theological Seminary who joined the bishops’ committee this year.

“White supremacy is a false narrative,” Pérez-Bullard said. “But it’s the false narrative of our United States context. And we didn’t invent it, and we didn’t keep it to ourselves. So it’s broader. It is something that impacts the whole of The Episcopal Church, which is not just the U.S.” She said it was important for bishops and other church leaders, as people of privilege, “to be able to recognize this thing and to talk about it in a sustained way, recognizing our own complicity.”

The Theology Committee, however, faced criticism from some bishops who questioned why the draft report’s focus appeared to be limited to white supremacy in the United States. Southern Ohio Bishop Thomas Breidenthal, the committee chair, also acknowledged and apologized for the committee’s failure to translate the document into Spanish, a standard procedure for all official church documents.

“It pisses me off,” Honduras Bishop Lloyd Allen said in English, punctuating his pointed remarks. He questioned whether The Episcopal Church would ever fully embrace the dioceses of Province IX, most of which are in predominantly Spanish-speaking territories and countries.

“There’s not love in this community,” Allen said through an interpreter. “And I’m sad that you always have to apologize. For how much longer?”

Breidenthal told ENS later that he took responsibility for not having the draft report translated, though he also noted that the feedback from the bishops will help the committee produce a more complete final report. The draft report has not been released publicly.

Colorado Bishop Kym Lucas, who is African American and attending her first House of Bishops’ meeting as a bishop, spoke forcefully on the floor about the need to engage fully in such tough conversations, using as an example her 11-year-old son’s experience with racism at school.

“My children’s lives depend on us having this conversation,” she said. “So thank you to the committee for the hard work. And thank you, to all of you, for leaning in to this very uncomfortable, very painful, very real place.”