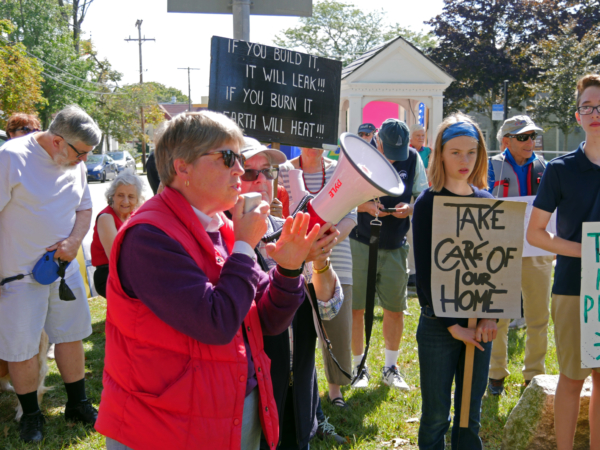 The Rev. Deborah Warner, rector of the Church of the Messiah, speaks at a climate strike event in Falmouth, Massachusetts, on Sept. 20, 2019. Photo: Egan Millard/Episcopal News Service

[Episcopal News Service – Falmouth, Massachusetts] A wave of youth-led protests against political inaction on the climate crisis that drew hundreds of thousands to the streets of cities around the world rolled into this usually quiet Cape Cod town when about 160 people gathered on the village green for a boisterous rally on Sept. 20. 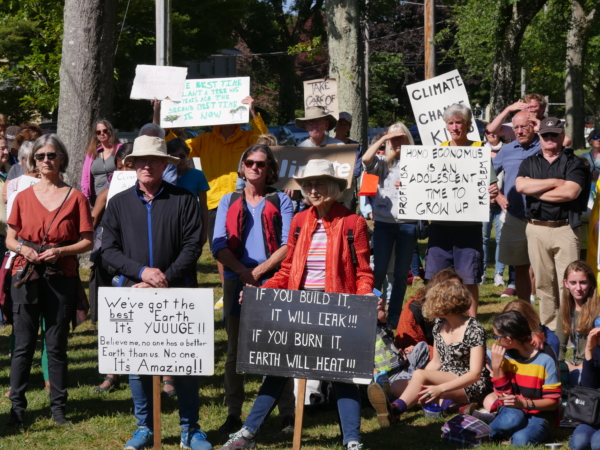 The participants, from toddlers to senior citizens, waved signs with messages like “DECLARE A CLIMATE EMERGENCY” and “THERE ARE NO JOBS ON A DEAD PLANET.” They beat drums and sang songs. They delivered impassioned speeches through a megaphone as passing cars honked in support. And when the clock struck 11 a.m., the bells of St. Barnabas Episcopal Church, which overlooks the green, began to ring. St. Barnabas, along with over a dozen other churches across Cape Cod, tolled its bells for 11 minutes, signifying that it is now “the 11th hour” and urgent, swift action is needed to avert catastrophe.

The cacophony was inescapable – and that was exactly the point.

“Church bells have historically been a clarion call to action, a way to bring attention to situations,” said the Rev. Will Mebane Jr., rector of St. Barnabas. “We have a crisis here. Ringing church bells for 11 minutes on a Friday morning as people drive by, walk by – [they go,] ‘What? What’s going on?’ So it’s a way to get attention and to just elevate the consciousness of people.” 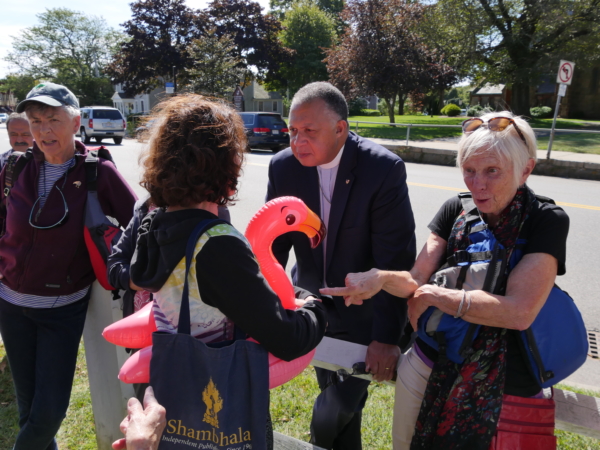 The Rev. Will Mebane Jr., rector of St. Barnabas Episcopal Church, speaks to a participant at a climate strike event in Falmouth, Massachusetts, on Sept. 20, 2019. Photo: Egan Millard/Episcopal News Service

Falmouth is especially aware of the threat it faces from climate change, not only because of its coastal location but also because it is home to the Woods Hole Oceanographic Institution, one of the world’s most renowned marine science centers, and several other scientific institutions that together have produced some of the most important research on climate change. 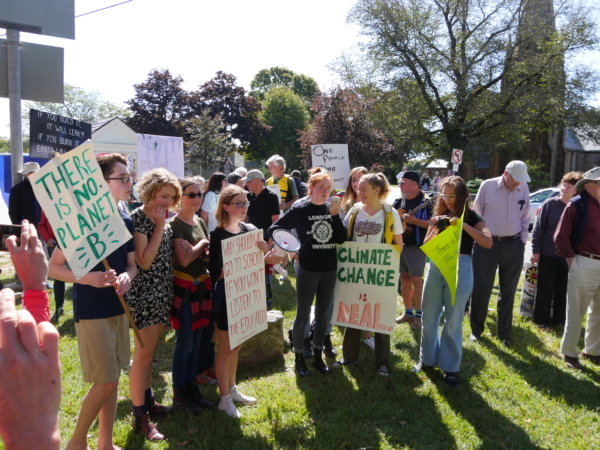 A group of high school students speak to the crowd at a climate strike event in Falmouth, Massachusetts, on Sept. 20, 2019. Photo: Egan Millard/Episcopal News Service

Speakers at the rally included scientists who have contributed to that research, a group of students from local high schools – some of whom had risked a three-day suspension by attending – and the Rev. Deborah Warner, rector of the Church of the Messiah, another Episcopal parish in town. 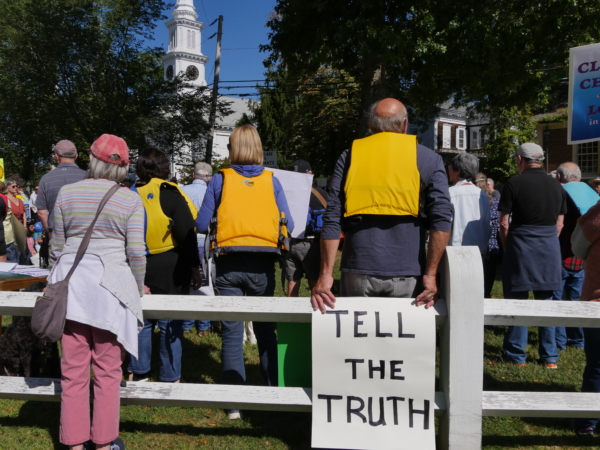 “There is no more crucial issue facing the entire world than this,” Warner told the strikers, many of whom wore life jackets and other flotation devices to symbolize the urgent threat of sea level rise. “People like to say it’s either economics or it’s the environment. That’s the same conversation.”

Warner borrowed an image from the theologian Sally McVeigh to illustrate the importance of respecting creation.

“We can look at the Earth as a hotel, where everything is disposable, or it is our home,” Warner said. “For the sake of the children and the young people that we hear, and their children and their grandchildren, we need to stand up and speak out and raise hell!”

Meanwhile, in Minneapolis, the House of Bishops interrupted its fall meeting for a moment of solidarity with the strikers. About 100 bishops gathered outside their hotel to pray and sing, having released a statement in support of the strikes the day before, and Presiding Bishop Michael Curry spoke about the Christian responsibility to protect the Earth.

“We are bishops of The Episcopal Church. And we are leaders who share leadership with other clergy and lay people in the church. But we are not here today as leaders. We’re here as followers. We’re here to follow the youth mobilization on climate change. We’re here to follow and support what they are doing to stand in solidarity with them,” Curry said. “[Jesus] said, ‘God so loved the world’ – not just part of the world, but the whole world. This is God’s world, and we must care for it and take care of it and heal it and love it, just as God loves it.”

In New York, Lynnaia Main, The Episcopal Church’s representative to the United Nations, was one of the tens of thousands who marched through the streets of Manhattan.

“The climate strikes happening worldwide today are an important opportunity for people to mobilize and raise their voices to demand that we all take action to address the climate emergency that is upon us,” Main told Episcopal News Service. “Notice that I did not say that people are striking to mobilize governments. That is true, but people are also mobilizing to mobilize each other.” 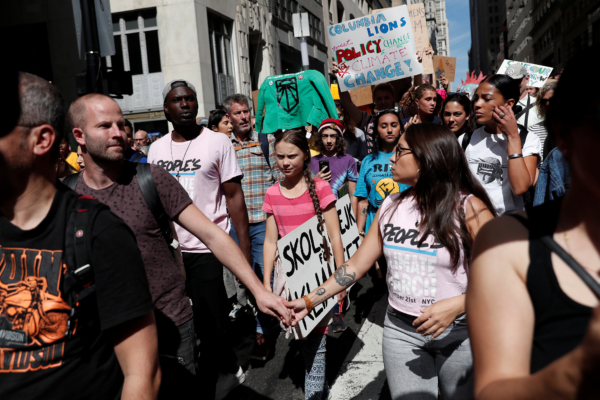 The crowds in New York – where the United Nations will hold a special climate summit starting on Sept. 23 – were full of young people who had been given excused absences from the city’s public schools. Young people – inspired by 16-year-old Greta Thunberg, who was scheduled to speak at the New York event – led the charge at many of the rallies and marches, from major cities to small towns.

Students and staff at the Rock Point School in Burlington, Vermont – affiliated with the Diocese of Vermont – participated in that city’s strike, as did young parishioners at All Saints Church in Pasadena, California.

Students at St. Stephen’s Episcopal School in Austin, Texas, organized their own walkout on the school’s campus.

And students from Trinity Episcopal School in Charlotte, North Carolina, walked to Charlotte’s Government Center with a large cutout of Thunberg and homemade signs.

Though some were too young to spell correctly, their message was clear.

– Egan Millard is an assistant editor and reporter for the Episcopal News Service. He can be reached at emillard@episcopalchurch.org. David Paulsen contributed reporting to this story from Minneapolis, Minnesota.