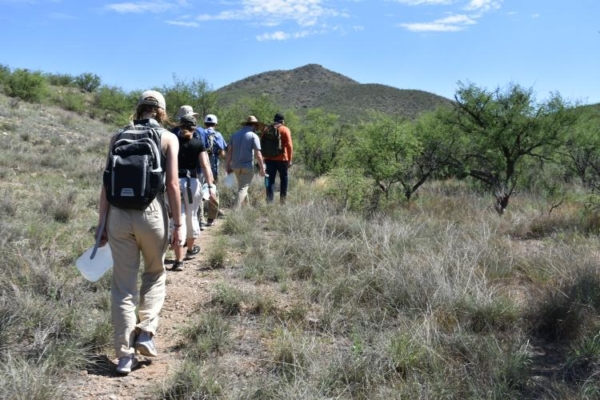 Massachusetts pilgrims hike part of a migrant trail in the desert to leave jugs of water for those who might need it. Photo courtesy of the Diocese of Massachusetts

[Diocese of Massachusetts] With the migrant crisis on the U.S.-Mexico border so often in the news, a group of seven high school-aged Episcopalians, along with three adults, set off in August for a week in Nogales, Arizona, to hear the stories of people who are experiencing it firsthand.

Their trip was part of Las Fronteras: Faith in Action, a yearlong diocesan program that helps young people from different congregations get to know one another and together explore issues relating to the border, such as security and hospitality, stranger and neighbor, privilege and disadvantage, and discipleship and servant leadership. The goal is for those in the program to participate in community service projects across eastern Massachusetts and develop a community of faith and support among themselves, before ending the program with the week-long trip to the U.S.-Mexico borderlands. For four of this year’s seven young pilgrims, crossing over the border into Mexico was their first time traveling out of this country. 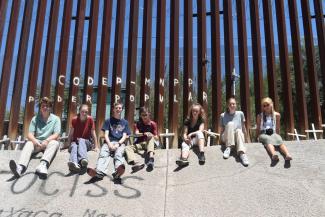 The trip was organized by the diocesan youth missioner, the Rev. H. Mark Smith, who said in an interview that he hopes that the program allows young people to see that the Gospel is a call to action, by providing an opportunity to form real human connections. Smith said that the trip allows the young people to engage the world by engaging each other.

“We can’t love each other across differences until we know each other across differences,” Smith said. “Those of us who are more privileged need to be willing to put ourselves in situations where we are leaving all of our privileges behind, and suddenly we’re the ones who don’t know the language and customs, and we don’t know where we’re going and we’re the ones sort of thrown off balance and unsure.”

The trip was organized in partnership with the Diocese of Arizona, specifically with the Rev. Rodger A. Babnew Jr., who serves as deacon at St. Andrew’s Episcopal Church in Nogales and is the convener and director of Cruzando Fronteras, an Episcopal ministry for border immigration and asylum-seekers in ecumenical partnership with the Grand Canyon Synod of the Lutheran Church and the Southwest Conference of the United Church of Christ. The ministry of Cruzando Fronteras is in Mexico, offering shelter, food, clothing, medical care and English classes for asylum-seekers and migrants while they wait for a credible fear interview — a screening procedure toward applying for asylum that requires establishing a credible fear of persecution or torture if returned to their home country. 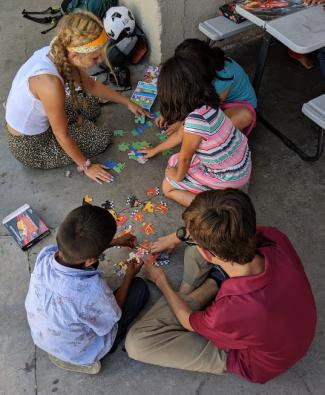 Pilgrims Helen Bradshaw and Freddie Collins work on puzzles with young migrant children. Photo courtesy of the Diocese of Massachusetts

In an interview, Babnew explained the importance of trips like these, saying that it is a mutual learning experience for both the young people who visit as well as for the migrants in the shelters.

“The news [the migrants] get in their travels is that America doesn’t want them,” Babnew said. “But when they meet all of these people who want to be with them … it really makes them understand that we do love them, they are our neighbors and we care about them.”

The pilgrims had the opportunity to visit migrant shelters and spend time with migrants staying there. Despite the language barriers, the pilgrims played games like soccer with the migrant children and formed connections that stuck with them.

At a post-pilgrimage dinner, the young pilgrims shared stories and pictures with Massachusetts Bishop Suffragan Gayle Harris and their family members. Kaitlyn von Ehrenkrook from St. Chrysostom’s Church in Quincy told the story of how a young migrant girl named Lupita gave both Kaitlyn and her sister Mikayla one of her stuffed toys to hold.

“I thought that was moving because those are probably one of the few possessions she has,” von Ehrenkrook said, “She gave them to us to hold, and we’re strangers.”

Throughout the trip, the Massachusetts high schoolers heard from multiple sides of the border story. They were able to go to a “Border Patrol 101” presentation to hear directly from U.S. Customs and Border Protection, and they sat in on court hearings for Operation Streamline, a joint initiative of the Department of Homeland Security and the U.S. Department of Justice that adopts a zero-tolerance approach to unauthorized border crossing and pursues criminal prosecution. 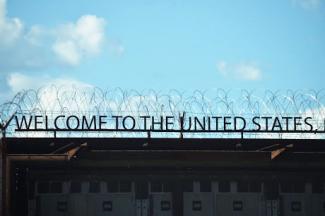 At the Nogales point of entry into the United States, those coming from Mexico are greeted with a welcome sign wrapped in barbed wire. Photo courtesy of the Diocese of Massachusetts

Helen Bradshaw, a young parishioner at the Parish of St. John the Evangelist in Hingham, shared her experience visiting the court proceedings.

“As [the migrants] were leaving, I saw their legs were chained together and their hands were in handcuffs and chained at their waist, and it almost made me cry,” Bradshaw said at the dinner. “It was insane to imagine that our country can treat people that are just looking for asylum like legitimate criminals.”

Freddie Collins, a young pilgrim from St. Elizabeth’s Church in Sudbury, told the story of a migrant the group met in one of the shelters who was in fear for her life. A young graduate student, she was filmed being part of student protests on her school campus, and because those protesters were having their homes targeted and burned as a consequence, she had no choice but to flee her home country.

Collins shared with those at the dinner what the migrant wants people in the U.S. to know: “‘Most people don’t want to leave, but when the only safe place that you have – your home – is no longer safe, where else do you have to go?’”

While on the trip, the pilgrims were able to do a water drop in which they hiked three miles of a migrant trail in the desert in 103-degree heat to leave water for the migrants who might go along that same path.

At the dinner after the trip, one of the adult pilgrims, Matt Miller from St. Elizabeth’s Church in Sudbury, shared with the group the impact that the water drop had on him personally.

“I realized that that activity of leaving water for people in the desert was the closest I had ever come to giving life to someone else,” Miller said. “The ability to have water or not have water in a desert when it’s 103 degrees out – it was really an eye-opening experience that that water I was leaving could save someone’s life potentially. It was sort of the most meaningful thing I feel like I’ve ever done that could have helped someone in a really significant, very sort of primal, basic way.”

On the trip, the pilgrims visited the place where the body of José Antonio Elena Rodríguez was found. Rodríguez was a 16-year-old boy who, while on the Mexican side of the border, was shot and killed in 2012 by a border patrol agent who claimed Rodríguez was throwing rocks at him.

During the dinner, the pilgrims also shared the story of a Mexican artist whom they met less than two weeks after the Aug. 3 shooting in El Paso, Texas, when a gunman killed 22 people.

“One thing that really stuck out to all of us, I think, is that [the artist] said every year he goes to San Diego to sell his artwork and to try to start making a name for himself, but he said that this year he might not even go,” one of the young pilgrims, Charlie Ives from St. Paul’s Church in Newburyport, explained. “He said, ‘Americans like shooting people who look like me.’”

Mikayla von Ehrenkrook of St. Chrysostom’s in Quincy said that having the pilgrimage experience humanizes the issue in a new way.

“Hearing something on the news is kind of a general thing: you hear it, and you go on with your day,” von Ehrenkrook said. “But if you meet the people that are experiencing that issue, it becomes more personal.”

In order to document their pilgrimage and share their experience, the pilgrims wrote blog posts before, during and after the trip. In their final reflections, the young people wrote about all they had seen and heard and what it meant to them.

“One of the most basic teachings in religion is to love your neighbors. Unfortunately, migrants are being turned away by their closest neighbor, the U.S.,” Kaitlyn von Ehrenkrook said in her final reflection. “We have created boundaries and left them to face death as they struggle to cross the desert, traveling miles just to be met with a wall blocking their hope for a new life – a safe home to bring their families to.”

“It is my hope that every person I share these stories with can at least have more insight into the truths of the dangerous conditions that are causing these migrants to leave their homes, and that we may have compassion for these people,” Bradshaw wrote in her final reflection. “The most powerful thing I can do to help is to share the stories and experiences I collected and keep them raw. No modifying, no sugarcoating. These sacred narratives must remain how they were told by the people who lived them.”

At the end of the post-pilgrimage dinner, Harris asked the teenagers, “What should the church be doing about this issue that we’re not doing? What should we do as a diocese or at your particular parish?”