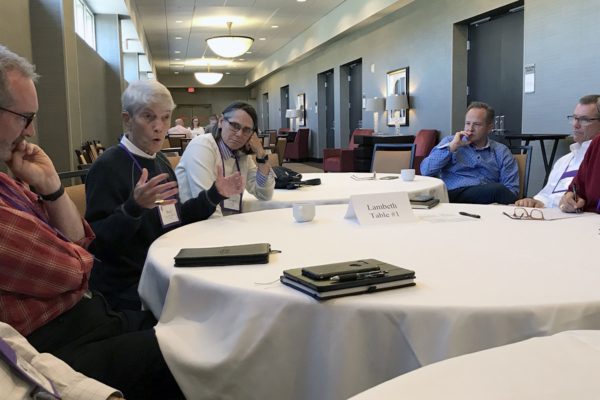 [Episcopal News Service – Minneapolis, Minnesota] Diocese of New York Assistant Bishop Mary Glasspool left no ambiguity about her plans to attend the Lambeth Conference 2020. She is going, even if her wife was specifically denied an invitation.

“The Diocese of New York needs to be represented. We need to be at the table,” Glasspool said Sept. 19 during an informal group discussion about Lambeth during the House of Bishops’ fall meeting.

The question of whether to go to Lambeth or to stay home has fueled anxiety this week among some of the Episcopal bishops and spouses gathered at the Courtyard by Marriott hotel in downtown Minneapolis. Archbishop of Canterbury Justin Welby’s decision to exclude spouses of gay and lesbian bishops from next year’s Lambeth Conference sparked an uproar within The Episcopal Church and in some other corners of the Anglican Communion.

Should Episcopal bishops skip the conference in protest? Should they go and make their objections clear while in England? Should the spouses who were invited take their own principled stands, and what would that look like? Should the House of Bishops agree on a unified response to what some see as an injustice?

Such questions were to be raised during an afternoon session Sept. 19 in which the spouses accompanied the bishops. That session was closed to reporters, to allow for open and honest conversations, but earlier in the day, Episcopal News Service was able to sit in on the smaller group discussion and listen to about 15 of the bishops share their thoughts, sometimes conflicted, on the best paths forward.

Glasspool opened the discussion with a pragmatic approach.

“Let’s prepare ourselves as best we can, whether we’re making our witness at home or in England,” Glasspool said. She plans to travel to England with her wife, Becki Sander, even if Sander won’t be able to attend official Lambeth gatherings.

Glasspool also cautioned her fellow bishops not to let this one issue dominate discussions at Lambeth, especially if doing so might provoke a conservative reaction, such as a new statement opposing same-sex marriage.

“If you take away all the fear and all my anxiety and all everybody else’s anxiety and ratchet it down, it’s a two-week conference. … My hope for us is that we can prepare as best we can, that we don’t go in blind,” she said. 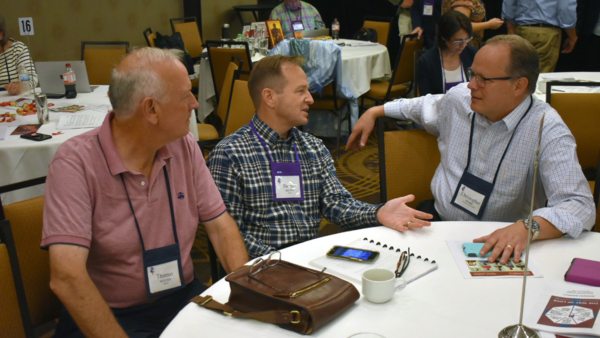 Glasspool received a letter from Welby in December 2018 saying Sander was not invited. At the time, Glasspool was the only Episcopal bishop with a same-sex spouse. After Maine Bishop Thomas Brown was consecrated in June, he too received an invitation to Lambeth and a letter from Welby that said Brown’s husband, the Rev. Thomas Mousin, was not allowed to come.

Brown attended the small group discussion on Sept. 19, as did the Rev. Bonnie Perry, who will be consecrated bishop of Michigan in February. Perry has not yet received an invitation, but her wife, the Rev. Susan Harlow, presumably would become the third Episcopal spouse excluded from the Lambeth Conference. Brown and Perry are still deliberating over how they and their spouses will respond.

Diocese of Western Michigan Bishop Whayne Hougland told the group that he was interested in talking about how all bishops and spouses can support each other in their decisions.

“How can we provide appropriate pastoral concern for those who are not going as members of this house for reasons of conscience and those who are going but aren’t invited to participate?” Hougland asked. “How can we be proactive and acknowledging the needs that might be there?”

El Camino Real Bishop Mary Gray-Reeves, who serves as vice chair of the House of Bishops, suggested that the bishops discuss such questions and other strategy matters at their tables during the closed session later in the day. With an estimated 134 bishops attending this week’s House of Bishops’ meeting, the larger group isn’t always conducive to strategic planning, Gray-Reeves said, but individual bishops can form smaller planning groups that could report to the full House of Bishops at its next meeting, in March. 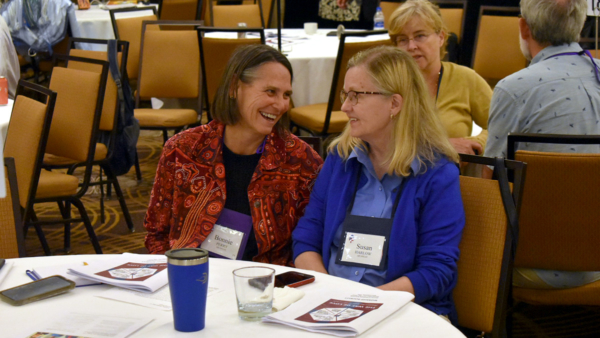 The Rev. Bonnie Perry, left, bishop-elect of the Diocese of Michigan, talks with her wife, the Rev. Susan Harlow, on Sept. 17 at the House of Bishops’ meeting. Photo: David Paulsen/Episcopal News Service

Some of the bishops noted that the 10 months until the start of the Lambeth Conference doesn’t leave much time to spare. Aside from the spouse issue, they discussed a range of points about preparation for Lambeth.

Several suggested that the bishops schedule a session at their March meeting focused on restorative justice and reconciliation, to equip the bishops for developing relationships with Anglican bishops despite any theological differences.

They also suggested studying 1 Peter, since that Scripture will be a central text at Lambeth 2020. Ohio Bishop Mark Hollingsworth, who attended the last Lambeth Conference in 2008, said he found the Bible studies to be powerful experiences that helped break down barriers between the participating bishops.

“That was the place where people, at least I heard over and over, people’s hearts were softened and arms were opened,” Hollingsworth said.

Security for the bishops was another concern raised. They also suggested discussing communications strategy at the House of Bishops’ March meeting, with a more intensive breakout session on how to interact with the news media, for those bishops who expect they will need such training at Lambeth.

Some bishops and spouses already have decided they will not attend Lambeth 2020 as a matter of conscience, and Presiding Bishop Michael Curry, in his sermon during the opening Eucharist on Sept. 17, urged the bishops to respect individual decisions. He confirmed he will attend. “I’m going as a witness to the way of love that Jesus has taught me,” Curry said.

Nebraska Bishop Scott Barker raised the question of what he would do if he chose to stay home, and whether other bishops who make similar decisions can gather in an intentional way behind a positive message. That prompted a discussion of what such a gathering might look like and where it could be held.

Kentucky Bishop Terry White offered a lighthearted response, playing off the name of a small city in his diocese.

“I’m willing to host something in London, Kentucky,” White said, prompting laughter from the group. “They have a great chicken festival.”