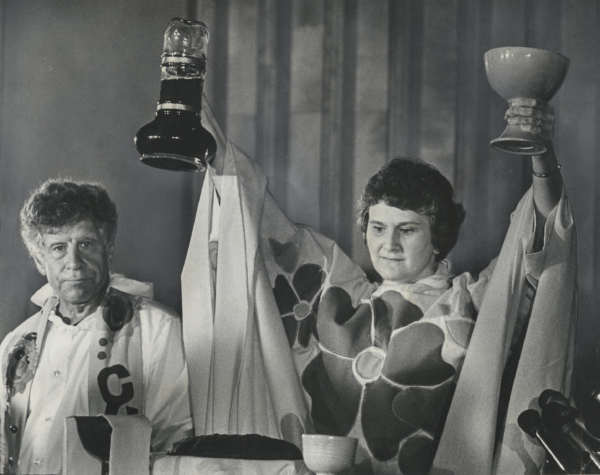 The Rev. Alison Cheek celebrates the Eucharist with the Rev. William A. Wendt, rector of St. Stephen and the Incarnation, in November 1974 in Washington, D.C. Photo: Harry Naltchayan/The Washington Post via Getty Images

[Episcopal News Service] The Rev. Alison Cheek, one of the first female priests in The Episcopal Church and the first to publicly celebrate the Eucharist, died on Sept. 1 at her home in Brevard, North Carolina, according to friends. She was 92.

Cheek was one of the Philadelphia Eleven, the first women to be ordained to the priesthood in The Episcopal Church. She and 10 other women were ordained at the Church of the Advocate in Philadelphia on July 29, 1974, two years before the ordination of women was officially authorized by General Convention. The highly controversial ordinations were later affirmed as valid.

“I sort of risked everything to do it,” she recalled on the 40th anniversary of her ordination. “I would do it again.”

Cheek was no stranger to bold moves. Born near Adelaide, Australia, in 1927, she was raised Methodist and graduated from the University of Adelaide, according to one of her former parishes. In 1957, she and her husband, Bruce, moved to the Washington, D.C., area, where she became a lay minister at several Episcopal churches while raising four children. In 1963, she became one of the first two women admitted to the Master of Divinity program at Virginia Theological Seminary, from which she graduated in 1969. With encouragement from her rector, she pursued ordination to the diaconate and became the first female deacon in the South in 1972.

During a retreat, she experienced a powerful spiritual calling to do something that had never been done before. She heard the voice of God telling her, “I want you to be my priest,” she later told the Chicago Tribune.

“It was a powerful experience. It’s why I never thought of giving up,” Cheek said. 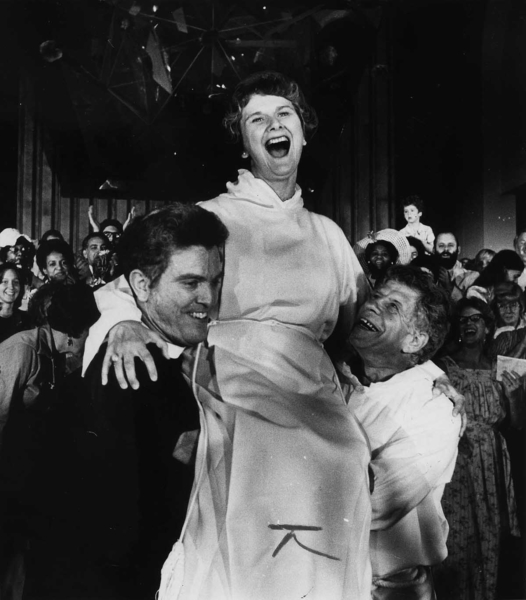 The Rev. Alison Cheek, a newly ordained priest, is carried by the Rev. William A. Wendt and the Rev. Lauren Mead at the Church of St. Stephen and the Incarnation on Aug. 5, 1974, in Washington, D.C. Photo: Harry Naltchayan/The Washington Post via Getty Images

And she didn’t, even though she expected she would be deposed – permanently excluded from any ordained ministry – after the Philadelphia ceremony.

“When the opportunity to go to the Philadelphia ordination came, I thought, ‘Well, if they toss me out, at least I’ll go witnessing to what I believe about the Gospel and about women’s appropriateness for being priests, and being true to what I believed,’” she said in 2014.

Amid the heated controversy that followed the Philadelphia Eleven ordinations, Cheek was invited to celebrate the Eucharist – something no woman had ever done in any Episcopal church – at St. Stephen and the Incarnation Church in Washington. But, according to the Chicago Tribune, after she preached, the local priest read a letter from the bishop saying that she was prohibited from celebrating the Eucharist because the status of her ordination was still in question.

“It was a very dramatic service,” she told the Tribune. “You could have heard a pin drop.”

Having been blocked at that service, Cheek returned later that year, and on Nov. 10, 1974, she made history yet again, becoming the first female Episcopal priest to publicly celebrate the Eucharist in “a service that ranged from solemn prayer to joyous hugs and bursts of spontaneous applause,” as The Washington Post described it.

Cheek was one of 12 American women selected as Time magazine’s 1975 Women of the Year, and she was featured on the cover in clerical dress.

During the 1970s, Cheek also studied at the Washington Institute of Pastoral Psychotherapy and started her own counseling practice. After her husband’s death in 1977, she closed her practice and became co-director of a Venture in Mission fundraising program in Philadelphia. Later, she completed a Doctor of Ministry at Episcopal Divinity School in Cambridge, Massachusetts, and joined the faculty as director of feminist liberation studies.

In 1996, Cheek joined the Greenfire Community and Retreat Center in Tenants Harbor, Maine, as a board member and teacher until its closure, and she served at nearby St. Peter’s Episcopal Church. She retired in 2013 to North Carolina, where she lived among friends.

“Her abiding sense of joy, her obvious intelligence, and deep passion for the Gospel of Jesus, combined with a delightful touch of mischief in her eye made her an irresistible and unforgettable presence,” recalled a friend, Elizabeth Kaeton, on Facebook. “She was a wonderful teacher and role model for the women for whom she helped make possible the actualization of their priestly vocation in The Episcopal Church. When her story is told, it will be said that we once walked among giants.”

Other members of the Philadelphia Eleven, who remained close with Cheek until her death, shared their remembrances on Facebook as well.

According to the Rev. Alla Bozarth, she is survived by six “sisters” in the Philadelphia Eleven, as well as her four children.

A memorial service is scheduled for Nov. 2 at 11 a.m. at St. Philip’s Episcopal Church in Brevard, North Carolina.