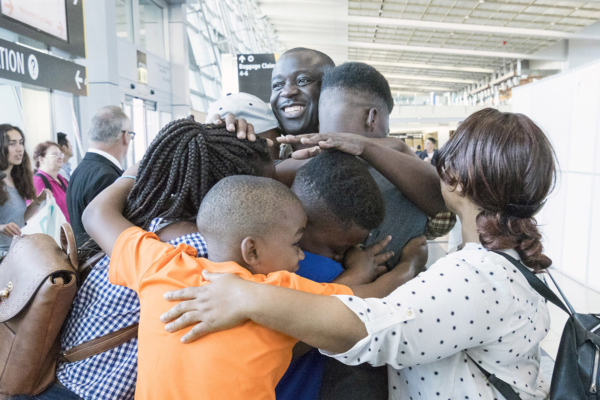 Constantin Bakala is reunited with his wife and seven children at San Diego International Airport in California on Aug. 19. Photo: Marc L. Lieberman

[Episcopal News Service] A Congolese asylum-seeker who had been separated on the U.S. border from his wife and seven children and held in federal detention for nearly two years reunited with his family last week in California. On Aug. 25 they celebrated his release with the Episcopal congregation that has rallied behind Constantin Bakala and his family.

“The joy that I feel right now, I have no words for it,” Bakala said in French, according to a KPBS report on the Sunday afternoon celebration at St. Luke’s Episcopal Church in San Diego.

Bakala and his family still could be sent back to their native Congo, which they fled under threat of persecution and violence. But for now, they are rejoicing that Bakala was granted parole and released to await the outcome of the case with the rest of his family.

Until last week, his wife and children hadn’t seen Bakala since November 2017, when the family arrived in Tijuana, Mexico, and requested asylum at the border, as prescribed by U.S. law. Bakala’s wife, Annie Bwetu Kapongo, was required to wear an ankle monitor so she could be released with her children while their cases were pending, but Bakala was detained and held at a series of immigration facilities.

As the family kept in contact with Bakala by phone, Kapongo and the children were welcomed at St. Luke’s. Some of the children, ages 6 to 17, began serving as acolytes and singing in the choir, the Rev. Colin Mathewson, the vicar, told Episcopal News Service in March. The congregation, which he co-pastors with his wife, the Rev. Laurel Mathewson, is a mix of native-born Americans, Sudanese immigrant families and newer Congolese refugees.

Bakala had been aligned with an opposition political party that promoted democratic reforms in Congo, where government security forces are accused of abuses against civilians amid a growing humanitarian crisis. Bakala fears he will be killed if he is sent back, Colin Mathewson said.

The congregation rejoiced with the family in March when Bakala won a stay of deportation while federal officials considered a request to reopen his asylum case. The congregation cheered again after Bakala arrived Aug. 19 at San Diego International Airport and hugged his wife and children for the first time in 20 months.

His daughter, Marie Louise Bakala, told KGTV it was a wish come true to have him back in time for her 18th birthday next month.

“I am really grateful to God and to all those people who are helping me and my family to be together,” she said.

With the asylum case moved to California, the family is waiting for a trial date, KGTV reported.