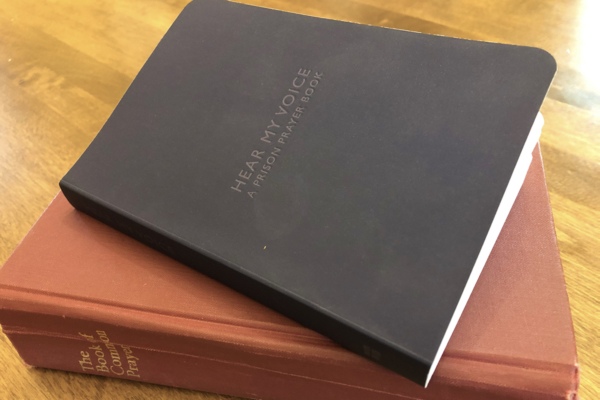 “Hear My Voice” was developed by the Evangelical Lutheran Church in America for use by prisoners and those who support them. Photo: David Paulsen/Episcopal News Service

[Episcopal News Service] A prayer book that was developed by the Evangelical Lutheran Church in America with contributions from an Episcopal priest aims to bring hope and spiritual guidance to inmates in jail and prison.

“Hear My Voice” was introduced this month at the ELCA’s Churchwide Assembly in Milwaukee, Wisconsin, with a written endorsement from Episcopal Church Presiding Bishop Michael Curry. This pocket-size resource contains prayers for a range of scenarios behind bars, from celebrating Easter to asking God to console a prisoner’s victims.

Far from producing a bleak or judgmental text, the contributors to “Hear My Voice” brought a spirit of reconciliation and healing to their work on the book, which is published by the ELCA’s Augsburg Fortress.

“I think culturally, socially, we lock people up and we forget about them, and we often don’t think of them any longer as fully human,” said the Rev. Elizabeth Bingham, an Episcopal priest in Michigan who wrote two of the prayer book’s sections. She explained that her experience working with inmate re-entry ministries made clear to her that prisoners are “children created in the image of God, just like everybody. We all are.” 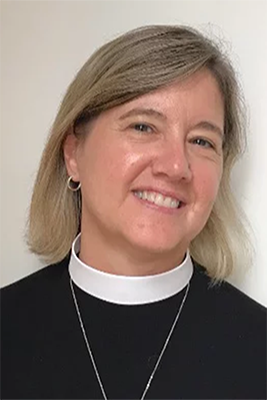 Bingham, who serves as associate rector at St. John’s Episcopal Church in Royal Oak, Michigan, was one of nine contributors to “Hear My Voice.” The others included current and former inmates, and all have some connection to prison ministries. It was edited by the Rev. Mitzi Budde, a Lutheran deacon and professor at Virginia Theological Seminary in Alexandria, Virginia.

“As the church, we are called to accompany those in prison and their families. Jesus says that whenever we visit someone in prison, we’re visiting Jesus himself,” Budde said in an online post, referencing Matthew 25:40 while introducing the prison prayer book.

The book’s 240 pages are broken into several main parts, starting with prayers for liturgical seasons. Bingham wrote the section for Easter, and other seasonal sections cover Advent, Christmas, Epiphany, Lent and Pentecost. Each of those sections includes a mantra, or short prayer, followed by a Scripture reading, a reflection, a quote, a question to ponder and finally a prayer and song.

Another part offers morning, evening and night prayers. Bingham contributed a “Liturgy of Healing and Hope,” which is included in the book among prayers intended for groups of prisoners.

Prisoners also are encouraged to pray “through ordinary days” with short paragraphs of prayer written for daily life behind bars: prayers for cellmates, friends and enemies; prayers for prison chaplains and officers; prayers to assuage the hurt of missing family members and milestones. One prayer is intended to be said by an inmate who is unable to say goodbye to or attend the funeral of a loved one who dies.

“In a system full of rejection and short on compassion, we want you to see yourself as God sees you, and to know deep in your bones that God delights in you,” the prayer book’s introduction says. “God loves you unconditionally! The most basic way for any of us to receive God’s deep and constant love is through the practice of prayer.”

The book was developed as part of the implementation of an ELCA social statement from 2013 that called on Lutheran congregations to support and minister to people who are incarcerated. The Episcopal Church’s General Convention has passed its own resolutions in recent years urging Episcopalians to do the same, and more recently, the church has stepped up its calls for reforms to end the United States’ system of mass incarceration.

More than 2 million people are behind bars in American prisons and jails, making for a large potential readership for the ELCA’s prison prayer book. The book costs $9.50, or $8.50 for bulk orders, and congregations are invited to buy copies to give to prisoners directly or through jail and prison chaplains. The ELCA also issued guidance for distributing the book, noting the challenge of navigating correctional facility policies and procedures.

Bingham said in an interview with Episcopal News Service that she plans to encourage congregations in the Diocese of Michigan to purchase copies, either to give to prisoners or to deepen their open prayer life in solidarity with prisoners.

Her experience with jail ministries began at a city jail re-entry unit in Washington, D.C., around 2013, and she continued meeting with inmates while attending Virginia Theological Seminary until graduating in 2017. It changed her perception of incarcerated people. She said she grew to understand them as “some lovely human beings” who wanted to improve their lives in the face of daunting challenges.

Budde was one of Bingham’s seminary professors, and when Budde was assigned to edit the ELCA’s prison prayer book, she reached out to Bingham for help. The team of contributors met in April 2018 at the ELCA’s headquarters in Chicago and spent two days talking about what the book should look like.

They left that meeting with the structure for the book and a table of contents, and each contributor was assigned segments. Throughout the rest of the year, Bingham, Budde and the others worked on their drafts, which they shared with each other online. They met in person once more to go over each contributor’s work, offering suggestions and encouragement, and after returning home, they worked on their final drafts. 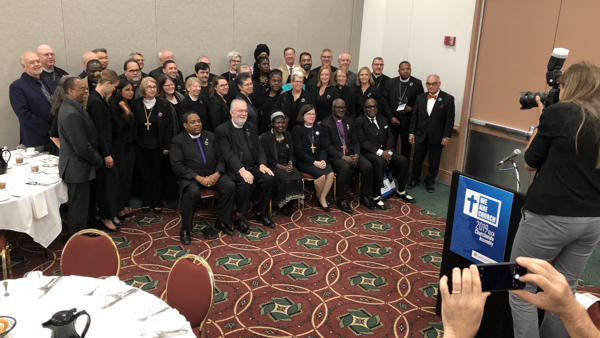 Ecumenical and interreligious officers, including from The Episcopal Church, pose for a group photo Aug. 8 at the Evangelical Lutheran Church in America’s Churchwide Assembly in Milwaukee, Wisconsin. They had gathered in support of the ELCA’s “A Declaration of Inter-Religious Commitment,” which passed later in the day. Photo: David Paulsen/Episcopal News Service

ELCA Presiding Bishop Elizabeth Eaton lauded the result as a “grace-filled book” and “a tangible sign of God’s vision of connection and wholeness even in the midst of isolation and brokenness.”

“The ELCA is grateful that our ecumenical partners, especially The Episcopal Church, are interested in this prayer book,” Eaton said in a letter introducing the book at the Churchwide Assembly. “May it be a resource that helps foster shared cooperation in the church’s ministry with those doing time, those beginning re-entry, and their families and friends.”

Bingham said the collaborative process went remarkably smoothly, and she felt no disadvantages being an Episcopal priest working on a Lutheran project.

“We’re so close, with being in communion with the ELCA,” she said. “Our language is similar, our theology is really similar, and I learned a lot about the Lutheran Church.”