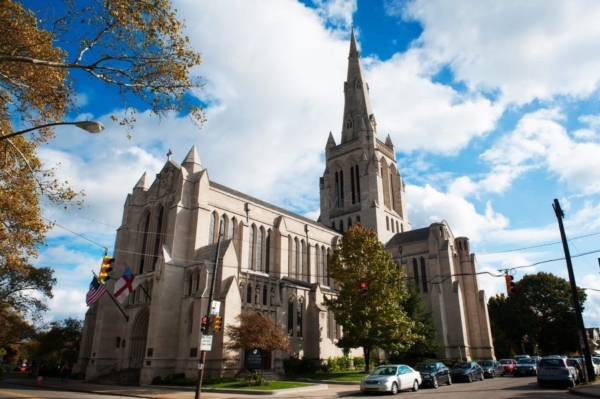 [Episcopal News Service] The Pittsburgh synagogue that was devastated by a mass shooting last October will hold its Jewish High Holiday services this fall at an Episcopal church down the street.

The Rev. Jonathon Jensen, rector of Calvary Episcopal Church, offered his church as a worship space shortly after neo-Nazi terrorist Robert Bowers opened fire during a Sabbath service at Tree of Life – Or L’Simcha Congregation on Oct. 27, killing 11 people, according to authorities.

That day, Calvary was packed with parishioners for a fundraiser, Jensen told Episcopal News Service. Along with a financial gift and card from Calvary parishioners, Jensen sent a letter to Tree of Life.

“Everybody says something like, ‘Let us know if there’s anything we can do to help,’ and I was specific in guessing that they would need space – worship, office, meeting – and so I offered specifically. ‘We’re good at doing that. If you need any of this, it’s yours,’” Jensen said. 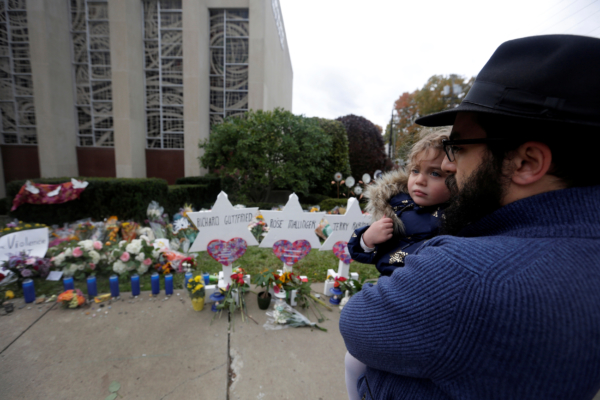 A man prays outside the Tree of Life synagogue in Pittsburgh on Oct. 29, 2018. Photo: Cathal McNaughton/Reuters

Tree of Life accepted. The synagogue is still damaged from the attack, and the congregation has been holding Sabbath services in a smaller space at another synagogue ever since, Jensen said. Last week, he met with Rabbi Jeffrey Myers to work out the details.

“There’s no charge for this,” Jensen told Myers. “This is the right thing to do.”

The High Holidays are a time of rejoicing, reflection and renewal for Jews. Rosh Hashanah is the joyful two-day celebration of the Jewish New Year, while Yom Kippur, 10 days later, is the Day of Atonement, a time of repentance and fasting. Tree of Life will hold five days of services for the High Holidays in late September and early October at Calvary. Normally there would be about 800 people at the primary services, but there will probably be more this year, and Jensen said many of his parishioners are planning to attend. Calvary seats about 1,000 people, he said.

To make the church more welcoming and suitable for Jewish services, several crosses will be covered.

“It’s exactly what we do in Lent,” Jensen said. “We are not denying who we are as Christian people at all. … We want to be as hospitable as possible. It’s like when somebody comes over for dinner, you find out what they like and don’t like to eat and try to welcome them.”

Jensen said Myers will come to Calvary on a Sunday in September to introduce himself to the congregation and explain the significance of Rosh Hashanah and Yom Kippur.

Knowing that Tree of Life – Or L’Simcha may not have a suitable space to worship for the High Holidays of 2020, Jensen offered to host those services at Calvary as well during his meeting with Myers last week.