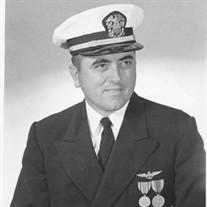 Edward Alonza Holmes Jr. packed adventure and good works into his 94 years of life. Born June 6, 1925, in rural Washington County, Georgia, he was the oldest of a family of three boys and two girls. He did well in school and athletics, all while helping with all the various chores on the family farm. After he completed high school, he became a naval aviator and trained as a dive bomber pilot during World War II. His passion for flying remained with him throughout his life and extended to restoring an old Aerocoupe — his favorite aircraft — which he flew for years.

After the war he completed his undergraduate degree at Mercer University and then earned a divinity degree and a Ph.D. in history from Emory University.

He became a chaplain in the Naval Reserves and served until his retirement as a commander in 1972. Up until the last decade of his life, he remained an enthusiastic pilot.

Ed’s career reflected his interest in serving and helping make the world a better place. He was an ordained Baptist minister, a professor at Stetson University, a dean at Emory University, a soccer coach and referee, a Peace Corps regional director in Nigeria, and the founder of the Overseas Development Office of the Episcopal Church,which helped establish libraries, hospitals and refugee programs in many areas of Africa. In Liberia, he was the dean of a private university and creator of a rural farming development program, and a grants administrator for the International Foundation.

Ed loved doing things that made the world a better place and worked well into his 80s. He traveled all over the world, meeting and encouraging people, and helped fund projects in health, education, and humanitarian assistance.

Thailand, the Amazon River basin, Vietnam, Sudan, Kenya, Liberia, the Philippines and many other developing areas benefited from his work, which brought hospitals, schools, clean running water and other resources they needed.

He had an undying interest in the happenings in the worlds of science, history and human affairs and was an avid reader of books, periodicals and magazines that expanded on his voracious appetite for knowledge. Ed was also a lifelong athlete who loved competing in track and field events, especially high jump, shot put, discus, and hurdles. Inducted into the Emory University Sports Hall of Fame, he continued attaining records and wins in masters events worldwide up into his 80s.

A memorial service will be held at Whispering Pines Retirement Community, 7501 Lead Mine Road, Raleigh, NC 27615. The date and time of the service are still to be determined.

In lieu of flowers, please consider a donation to the Southern Poverty Law Center (https://splcenter.org).