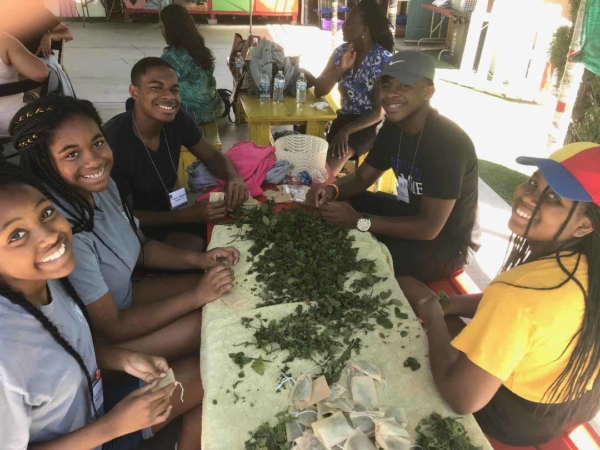 About 300 participants from across the Caribbean, Central and North America and the United Kingdom attended the gathering, themed “Preparing the Way for Such a Time as This: Many People, One Lord.” Attendees enjoyed daily Bible study, spirited worship, civic engagement and social justice-focused workshops, while also observing the 400th anniversary of the arrival of enslaved Africans in what would become the United States.

Members honored the outgoing board, especially National President Annette Buchanan, and weighed a response to Presiding Bishop Michael Curry’s “get souls to the polls” invitation to engage voter education and registration drives in 2020.

Curry preached at a joyous July 24 praise service, planned and led by youth and young adults. It featured the Holy Spirit Dancers from St. James’ Episcopal Church in Houston, Texas, an ensemble of young women that has performed at UBE conferences since 2016.

Buchanan said UBE “is the church’s largest advocacy group. I want us to be proud of the fact that, over these 51 years, we have been able to sustain our organization. UBE is an example for the church. Many other advocacy organizations have used our model as a way to build and propel their organizations forward.”

During her six-year term, the racial justice organization established a Washington office, hired staff, upgraded technology and introduced the first Sunday in September as UBE Recognition Sunday in honor of the Rev. Alexander Crummell. The organization added weekly online Bible study and prayer lines, and strengthened ties to The Episcopal Church Office of Black Ministries and other church bodies, and increased mentoring, outreach and advocacy efforts.

While the annual gatherings are “a family reunion, we are hopeful you will also see them as a way of developing your leadership skills,” Buchanan told the gathering. “When we gather, it is an opportunity to learn and to be revitalized to go back into the world.”

Activist Lloyd Wilke said during a panel discussion about activism that he helps to support Inglewood youth by offering conflict resolution and diversity training for educators and law enforcement officers, with “Tools for Teens” at the Museum of Tolerance and a “Keep it Real” boxing instruction program at local churches.

“After they box for an hour and are totally exhausted, I have them right where I want them,” Wilke said. “We sit in a circle and talk about issues and the things on their minds.”

“The point being, there’s a correlation that helps us hear the words of Jesus differently … trying to find a language rooted in the faith but connected to the culture to help express where we are,” Cyrus-Franklin said.

When his congregation joined local rent stabilization advocacy and canvassed the neighborhood, it “became a form of evangelism for us, a faith walk,” he said. “One way we love our neighbors is to make sure everybody can afford to live here.”

Melina Abdullah, professor and chair of pan-African studies at California State University, Los Angeles, said church involvement in the Black Lives Matter movement is crucial “because this is spirit work.” Black Lives Matter was born in 2013 in the aftermath of the acquittal of George Zimmerman in the shooting death of black teenager Trayvon Martin in Florida.

Challenges, such as the rise of hate groups, increased allocation of public dollars to policing and the criminalization of homeless people, “could seem unwinnable were we not faithful people,” she said. “The answer to homelessness is house keys, not handcuffs. It could seem insurmountable, but we win through spirit.”

Voorhees College President W. Franklin Evans said the presiding bishop will be the guest speaker at the historically black institution’s April 7, 2020, Founder’s Day celebration. The school in Denmark, South Carolina, has begun offering an online degree program and recently opened a veteran’s resource center. In addition to receiving a $500,000 historic preservation grant and a United Thank Offering grant to create a student wellness center, the college has established a relationship with the University of Ghana, “and hopefully this fall we will have 25 students enrolled at Voorhees College” from Ghana, Evans said.

St. Augustine’s has established such priorities as enrollment management, student learning and achievement, campus beautification and the creation of distinctive programs.

Office of Black Ministries to UBE: ‘We want to invest in people’

The Rev. Ronald Byrd Sr. told the conference that the Office for Black Ministries has a new mission statement and a newly designed website. He announced innovative partnerships, expanded ministry, coaching and mentoring opportunities and a “Healing from Internalized Oppression” curriculum launching Aug. 16-17 in Southern Ohio.

As Episcopal Church missioner for black ministries, he seeks “to inspire, transform and empower people of the African diaspora to live fully into the Jesus Movement,” adopting a convocation model. “Our community is as diverse as any,” Byrd said.

“We have African Americans, South Africans, East Africans, Afro Caribbeans, Sudanese and many others,” he told the gathering. “We hosted our first convocation of East Africans here in the Los Angeles diocese. It is our intent and strategy, as we go forward, to convene more.” A convocation is planned with Sudanese clergy in 2020, and “we are also working with our Cuban brothers and sisters. We are hoping to make a trip there early next year,” he said.

Byrd also announced a partnership to help alleviate a clergy shortage in the Virgin Islands. Mainland clergy may spend two to four weeks in the Virgin Islands leading worship. “In return, you receive free air travel, accommodations, ground transportation and, in some cases, a small stipend,” he said. “They need clergy now.”

He also announced other supportive programming, adding: “We want to invest in people. We want to come to your neighborhood, your diocese, your deanery. We are on the move,” he said. “The only way this office will be successful is through you and your support.”

The Rev. Sandye Wilson said the board wants to set some clear goals for Curry’s 2020 voter education and registration drive invitation before introducing it to local chapters. She announced a series of resolutions proposed for General Convention 2021, scheduled for June 30-July 9 in Baltimore, Maryland.

The resolutions would include a $2 million request for continued funding for Becoming Beloved Community to respond to racial injustice, income equality reforms through minimum wage increases, and funding for the Office of Black Ministries’ Healing from Internalized Oppression curriculum. Proposals also call for addressing voter suppression and tackling mass incarceration. The resolutions may be found here.

The 52nd annual UBE Business Meeting and Conference will be held in June 2020 in Montgomery, Alabama.