[Episcopal News Service] The bishop of the Diocese of Hawaii and Native Hawaiian clergy have spoken out in support of a demonstration that is blocking a proposed telescope project on the top of the state’s highest mountain, a site considered sacred in Hawaiian culture.

The diocese on July 22 released a statement on the issue from two Native Hawaiian clergy members, accompanied by a letter from Bishop Robert Fitzpatrick aligning the diocese with those who have positioned themselves as “protectors” of the mountain, Mauna Kea, and seek to halt progress on the telescope.

“We, the Episcopal Church in Hawai’i, stand in service to Mauna Kea as a sacred place, and in solidarity with those who are protecting her,” the Revs. Jasmine Hanakaulani o Kamamalu Bostock and Paul Nahoa Lucas said in their written statement.

The protests on Hawaii’s Big Island “have brought attention to the alienation of the indigenous people of these islands, the kanaka maoli, from their own land,” Fitzpatrick said. “As Episcopalians, we must not be afraid to speak honestly together about past wrongs and the current injustices. We must talk and, more importantly, deeply listen and act.”

Drawing comparisons to the Native American demonstrators who in 2016 tried to stop an oil pipeline near the Standing Rock Sioux Reservation in North Dakota, Native Hawaiians and activists have been camped since last week at the foot of Mauna Kea, a dormant volcano, blocking an access road in opposition to the Thirty Meter Telescope.

The $1.4 billion project has cleared various regulatory hurdles and was backed by a ruling of the state Supreme Court. While legal battles continue, protests have remained peaceful, though 34 participants were arrested, cited and released last week, according to the Honolulu Star Advertiser. 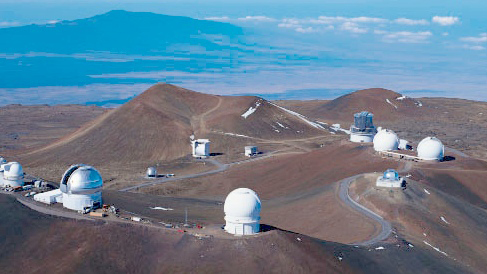 The Maunakea Observatories are seen from above the peak on Hawaii’s Big Island. Photo: NOAA

About a dozen telescopes already are positioned at the top of Mauna Kea’s 14,000-foot peak, a treasured location for those studying the cosmos because of the site’s natural advantages, including clear air and reduced light pollution. Some Hawaiians favor the project as a boost for the local workforce and economy, though the Native Hawaiian demonstrators and other opponents argue that scientific development of the site has gone far enough.

“This is not an issue of being anti-science, as Hawaiian people have a long and proud history of technological advancement,” said Bostock, curate at St. Peter’s Episcopal Church in Honolulu, and Lucas, vicar at St. John’s By-the-Sea Episcopal Church in Kaneohe. “This conflict centers on efforts to respect Mauna Kea as a sacred space – as wao akua, realm of the gods.”

Their statement compares Mauna Kea to sacred sites in the Judeo-Christian tradition, such as Mount Horeb, Mount Carmel and Mount Zion.

“Sacredness is not merely a concept or a label,” they said in the statement. “It is a lived experience of oneness and connectedness with the natural and spiritual worlds. Nature is not inert, but a place where our Creator is known and honored. Mauna Kea is such a holy place for the Hawaiian people and many others.”

The modern Episcopal Church has been supportive of indigenous people’s quest for self-determination and preservation of indigenous culture and spirituality. That contrasts with the church’s historic complicity in oppressive colonial and federal systems. In the 1800s, Episcopal missionaries ministered to American Indian tribes, but conversion to Christianity typically required leaving Native spirituality behind.

Native Hawaiians’ struggles against American colonialism began more recently. The Hawaiian monarchy was overthrown in 1893 by a group backed by American business interests, and Hawaii became the 50th state in 1959.

A 1997 General Convention resolution specifically called on the church to “take such steps as necessary to fully recognize and welcome Native Peoples into congregational life.” And in 2009, General Convention repudiated the Doctrine of Discovery, rooted in a 1493 document that purported to give Christian explorers the right to claim lands they “discovered” and convert the people they encountered.

Bostock and Lucas affirmed in their statement that the Doctrine of Discovery has long been discredited, and they offered prayers “that the dignity of all people will be upheld, and the sacredness of Mauna Kea will be honored and protected.”

Fitzpatrick said he concurred with the statement and offered a teaching on the issue.

“Our faith does not promise freedom from conflict or from disagreement. We are called to seek together peace with justice in the Beloved Community,” he said. “Such conversations will take time – even years. It will certainly call for patience and honesty. Our conversation must deepen now.”

In the short term, he recommended a “moratorium on all moves to begin construction” of the telescope.

“I acknowledge that the livelihoods of some will be impacted and the hopes of others overturned by such a move,” Fitzpatrick said. “I am saddened by that reality and it certainly must be part of our conversations, but we must continue together.”