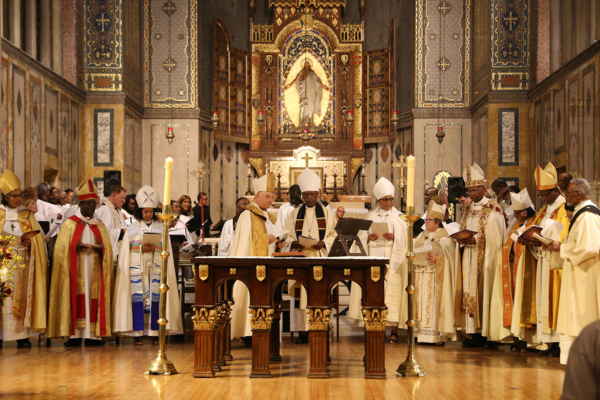 The Los Angeles Episcopal Chorale performed a choral prelude, “Especially Do I Believe in the Negro Race,” authored by W.E.B. Du Bois, recalling African Americans’ early struggles for equal rights. Du Bois, a founder of the NAACP in 1909, authored the credo with Margaret Bonds, one of the first black composers and performers to gain widespread recognition in the United States. The credo calls for pride of race, peace, liberty, equal education and patience. 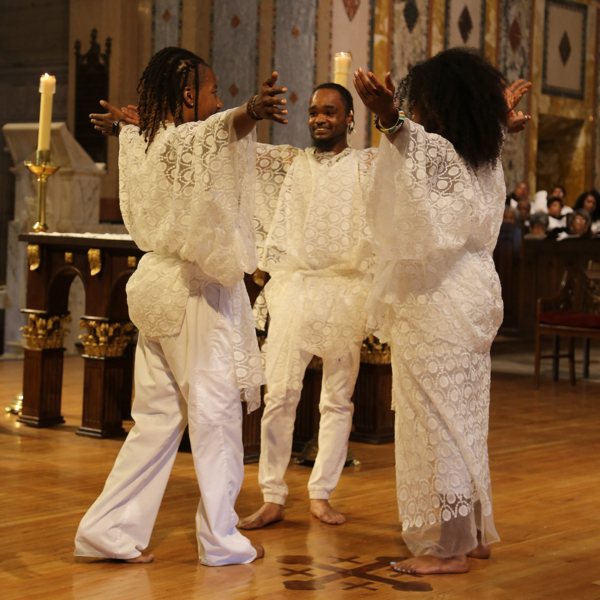 The Africa in America dance ensemble performs a prelude at the July 22 opening Eucharist. Photo: Janet Kawamoto/Diocese of Los Angeles.

Rousing drumming and dynamic dancing brought several hundred worshippers to their feet as the Africa in America Ensemble of dancers and drummers led a procession of bishops, clergy and lay leaders into the Romanesque-style St. John’s Cathedral near downtown Los Angeles. The two-hour worship service in Swahili, English and Spanish also included original musical offerings, a Swahili psalm of praise and a Nigerian musical rendition of the Nicene Creed.

West Tennessee Bishop Phoebe Roaf, guest preacher at the 7 p.m. Eucharist, noted the 400th anniversary of the 1619 arrival of the first African slaves in the British colony of Virginia, along with the continuing struggles today in the church and society.

“The unique experiences of black folk have uniquely prepared us for such a time as this. The work is hard, it’s challenging and it’s life-giving,” Roaf said, echoing the conference theme, “Preparing the Way for Such a Time as This: Many People, One Lord!!”

The challenges also present opportunities for ministry and building bridges and partnerships.

“As we continue to fight and struggle for the rights of black folks, remember this is bigger than us,” Roaf said. “There are a lot of other folks struggling, too. So, where are we, when it comes to assisting our immigrant brothers and sisters? 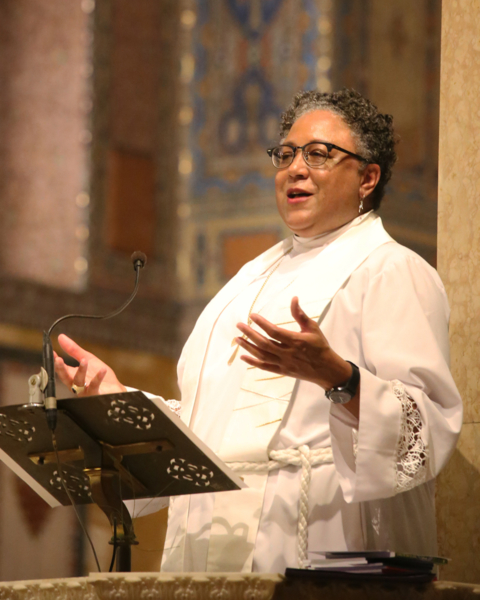 Bishop Phoebe Roaf, newly ordained and consecrated in the Diocese of West Tennessee, preaches at the opening Eucharist on July 22. Photo: Janet Kawamoto/Diocese of Los Angeles

“Where are we when it comes to maintaining the health of this planet Earth, our fragile home? Where are we when it comes to the issues facing our LGBTQIA brothers and sisters? Even if racial discrimination were eliminated from this church and this nation tomorrow … our work would not be done because, as Dr. Martin Luther King said, none of us is free as long as one of us is not free.”

Evoking laughter and applause, she added: “Black folk have been advocating for full equality in our beloved church and this (country), our home — notwithstanding what other people may think of where we’re going back to.” Roaf was referring to recent tweets in which President Donald Trump told four congresswomen of color who have been critical of him to “go back” to where they came from. “I don’t know about you, but I am home,” she said.

Remembering lessons of the past; healing hearts today

During a welcome to conference attendees, Los Angeles Bishop John Taylor recalled that UBE was born at St. Philip’s Church in Harlem in February 1968, a year “when plenty of fresh political hay was made by leveraging voters against one another on the basis of race.”

Remembering the lessons learned that tumultuous year, in which both King and Robert F. Kennedy were assassinated amid great civil unrest, “enables us to better understand times like this,” he said. 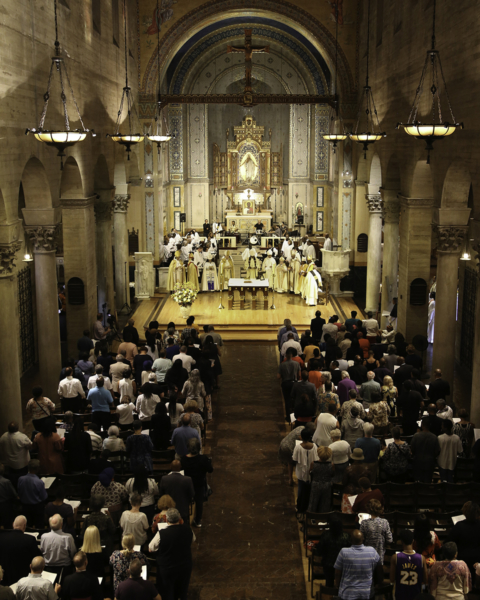 “We are many peoples, many cultures, many languages, from many nations gathered under the wing of one Lord, collecting our promise of freedom and justice in one nation under God. So, if someone says to any of us, ‘Go back where you came from,’ we follow that instruction to the letter. We come here,” Taylor said, referring to the historic cathedral’s altar.

“This is where we come … to fortify ourselves and go out and play our indispensable role in healing the heart of America and the world.”

UBE President Annette Buchanan said the conference theme was chosen to reflect the rich cultural diversity of the African diaspora and to pay homage to the 400th anniversary of the arrival of Africans on this continent.

The goal of the conference is “to prepare ourselves to face all of the issues in our nation,” she added. “At times, it feels like we are reliving some experiences of the past. We must fortify and sustain ourselves to be recommitted to the fight ahead for many in our community.

“Let’s take advantage of the rest of this week, of the time we have together to really come away with some action plans for things to take home,” she told the gathering, which includes Episcopalians from across the United States, the Caribbean and Central America.

Citing Presiding Bishop Michael Curry’s “Way of Love” spiritual practices and the racial healing aspects of “Becoming Beloved Community” as resources, she added: “There truly is work to be done.”

“The past few years have uncovered a level of hatred far greater than I ever imagined from my fellow American citizens,” Roaf said. “These are scary times we’re living in. We need to acknowledge it and not be paralyzed by it.”

Transformation is key, she added.

“The bottom line, brothers and sisters, is that our church and our world will be transformed once we are transformed. Our transformation … is the first step in our work of racial reconciliation and social justice.”

The conference continues through July 26.

Workshops and plenaries range from multicultural liturgy to spirituality and sexuality, opportunities for ministry, Black Lives Matter and issues of mental health.

The Most Rev. Julio Murray of Panama, primate of Central America, is expected to celebrate a 7 p.m. Eucharist on Tuesday, July 23, also to be held at St. John’s Cathedral.

Curry is expected to preach at a youth and young adult service at 7 p.m. July 24 at All Saints Church in Pasadena. The service will be live-streamed at allsaints-pas.org/live-stream.