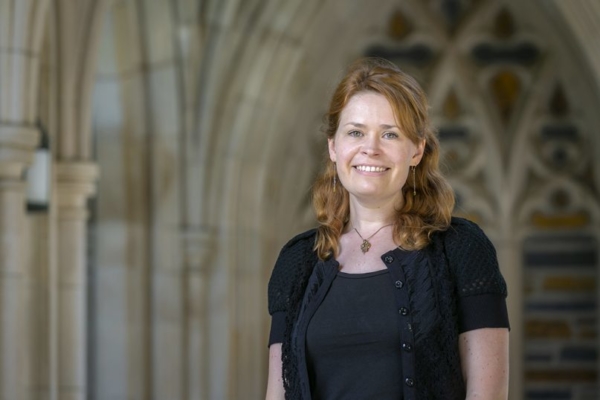 [Religion News Service] On July 22, the feast day of Mary Magdalene, Elizabeth Schrader will hike up a mountain in the south of France to the cave where, legend has it, the saint lived out her remaining days after the crucifixion of Jesus.

It will be Schrader’s fourth trek to the cave in the town of Saint-Maximin-la-Sainte-Baume, an hour’s drive from Marseille, but her first on the actual feast day decreed by Pope Francis in 2016. Even before the decree, the day had long drawn pilgrims who process through the streets of Saint-Maximin with the purported skull of Mary Magdalene in a golden reliquary.

Schrader, a doctoral student at Duke University, has her own way of honoring the woman who witnessed Jesus’ death and resurrection. Schrader’s academic work, like that of others, attempts to liberate Magdalene from the patriarchal overlays of ancient Christian scribes who recorded the New Testament’s four Gospels.

For Schrader, the impulse to recover the scope and stature of Mary Magdalene came nine years ago, when she was Libbie Schrader, a singer-songwriter in the New York pop scene. A cradle Episcopalian, she had wandered into a church garden in Brooklyn to pray to the Virgin Mary and heard a voice telling her to seek out Mary Magdalene.

Three days later, Schrader wrote a song, “Magdalene,” that later become the title of her 2011 album. That, in turn, sent her to the Brooklyn Public Library in search of scholarly articles about the Jesus follower, who is sometimes portrayed as a prostitute, though the Gospels never say so.

“It’s not my choice to be working on this,” said Schrader, 39, who left her music career to pursue scholarship. “It happened to me.”

Schrader’s central discovery, which she wrote about in a paper published by the Harvard Theological Review two years ago, is that Mary Magdalene’s role was deliberately downplayed by biblical scribes to minimize her importance.

Specifically, Schrader looks at the story of the raising of Lazarus told in the Gospel of John. In today’s Bibles, Lazarus has two sisters, Mary and Martha. But poring over hundreds of hand-copied early Greek and Latin manuscripts of the Gospel, Schrader found the name Martha had been altered. The scribes scratched out one Greek letter and replaced it with another, thereby changing the original name “Mary” to read “Martha.” They then split one woman into two.

Schrader argues that the Mary of the original text is Mary Magdalene, not Martha or Martha’s sister, Mary. The two sisters belong to another story, in the Gospel of Luke, that is not repeated in John’s Gospel.

The reason for the change, Schrader said, was that later scribes did not want to give Mary Magdalene too big a role in the events of Jesus’ life. Already Mary Magdalene is at the crucifixion and the empty tomb, and in the Gospel of Luke she is exorcized of seven demons and then travels with Jesus and supplies him the funds needed for his ministry.

In particular, the scribes may have wanted to avoid giving Mary Magdalene the confession of faith that follows the story of Lazarus. That confession — “I believe that you are the Messiah, the Son of God, who is to come into the world” — in today’s Bibles is uttered by Martha. Schrader argues it was meant to be said by Mary Magdalene.

“Martha is added as a way of diminishing Mary Magdalene and confusing her presentation,” said Schrader in a Skype interview from Germany. “It’s a later editor’s interference with the intention of (John) the evangelist.”

Schrader posited that Mary Magdalene caused tension with Jesus’ male disciples, especially his handpicked deputy, Peter, that is evident in several noncanonical gospels — accounts of Jesus’ works not included in the New Testament. Later scribes, Schrader said, may have been acutely aware of that.

Stephen C. Carlson, a scholar at Australian Catholic University who studies early Christianity, said Schrader does a very good job demonstrating what he called “textual instability” surrounding Martha that many scholars may not be aware of.

“The tendency would be to think that the variants she’s discovered and is calling attention to can be dismissed as some kind of scribal incompetence,” Carlson said. But he added that he would be interested in seeing a fuller treatment of her study in a doctoral dissertation.

Other scholars have suggested that Mary Magdalene could not have been Lazarus’ sister because the Gospel indicates that Lazarus and his sister lived in Bethany, near Jerusalem, whereas Mary Magdalene was from the Galilee region — possibly Migdal or Magdala — where most of Jesus’ ministry took place. Schrader, however, argues that Magdala comes from the Hebrew word for “tower,” an honorific title, and doesn’t refer to the town where Mary was from.

Last week, Schrader traveled to Münster, Germany, to meet with the editors of the Nestle-Aland New Testament, the edition of the Greek text used by most scholars, students and translators today. She discussed her findings about the changes made in the text of John’s Gospel and said the editors may consider adding a footnote to that effect in upcoming editions.

Schrader’s paper comes at a time when many scholars are trying to recover women’s roles in early Christianity — roles the early church fathers tried to suppress.

Just this month, another scholar posited that three of the earliest surviving images of Christians worshipping at church altars show women in official liturgical roles. Speaking at the International Society of Biblical Literature in Rome, Ally Kateusz said the images are significant because they show women and men in parallel roles, suggesting they may have served as deacons, priests, or maybe even bishops.

Mark Goodacre, a New Testament scholar at Duke, said he was encouraged by all the new scholarship around women in early Christianity.

“There have been many men who have imagined the Christian movement as a thoroughly male-dominated, exclusively male setup,” Goodacre said. “We’re in the process of trying to reimagine Christian origins and put women back into where they originally were, having been written out by male interpreters over the years.”

For Schrader, who grew up in The Episcopal Church, where women serve as priests, bishops, even presiding bishops, it makes sense that a younger generation of women would see things others have not.