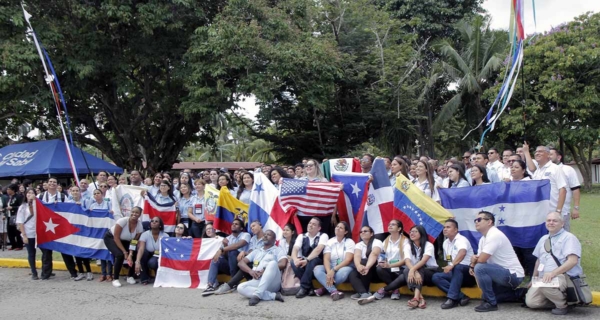 “Let no one despise your youth,” said Curry, referencing 1 Timothy during the July 18 opening Eucharist. “Follow Jesus and just love.”

EJE19 brought 96 young people ages 16 to 26 from across Latin America and the Caribbean to Panama City for the gathering styled after the popular Episcopal Youth Event held every three years in the United States. Delegations and volunteers came from each of the seven Province IX dioceses and the Diocese of Cuba, as well as from Mexico, Brazil, Guatemala and Panama. EJE also included a six-member Spanish-speaking youth delegation from the United States, with participants from New York, Texas, Arizona and California. 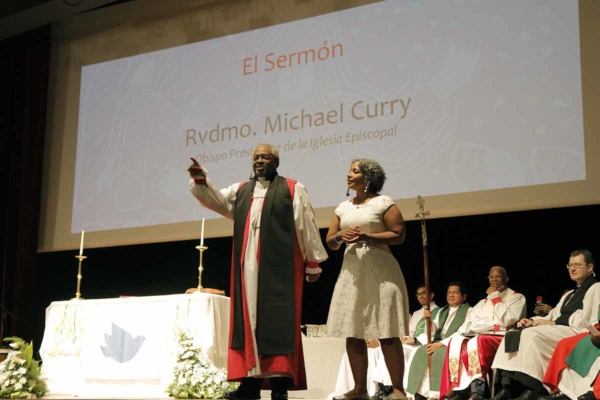 During the Eucharist’s readings, a young participant read the passage from 1 Timothy, to which the presiding bishop referred: “Let no one despise your youth, but set the believers an example in speech and conduct, in love, in faith, in purity.”

It was a refrain repeated one way or another throughout the July 18-19 “Way of Love”-themed event held at the City of Knowledge, a former U.S. military base in Panama City that now serves as an NGO hub and conference facility, with theaters, auditoriums, classrooms and dormitory-style lodging.

“The truth is, love is the key to everything, everything that matters to life and death. Love is the key,” said Curry. Citing an old Latin hymn, he continued: “‘Wherever true love is found, God himself is there because God is love.’

“Jesus taught us that love is the key to everything. If you don’t know what to do, do what you think the loving thing is to do,” he said. “Oh, that’s a message for the world.

The presiding bishop preached these words as the United States continues its struggle to respond to the large number of migrants arriving at the U.S.-Mexico border seeking asylum. Migration, particularly economic migration, has long been characteristic of the region. However, forced migration is a more recent phenomenon. 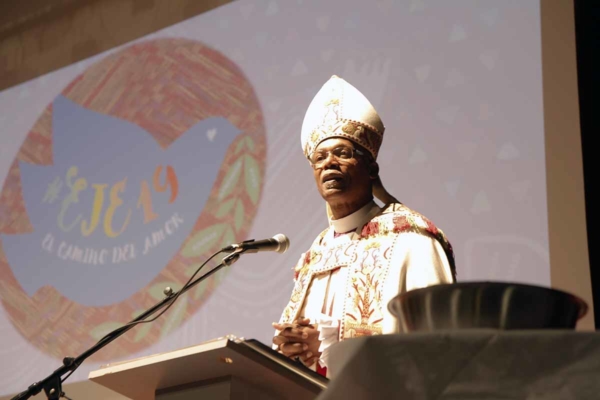 Youths expressed their own political concerns during the Eucharist, as evidenced in the prayers of the people, when they called for justice and peace in their own countries. They called out Colombia’s violent history of war and called for peace. They called for an end to corruption, poverty, injustice and environmental degradation in Honduras and called instead for a homeland built on unity, love and the common good. They prayed for the young people across Central America who find themselves caught up in gangs, and for the safety of women and girls, that they not become victims of violence. They also asked for peace in Puerto Rico and for freedom in Venezuela.

From the opening Eucharist, it was clear the event was organized by youth for youth in their own cultural, linguistic, geographical and ministry contexts.

“We just wanted to bring everyone together because this is the way Jesus wants it,” said Kenniane, 22, a planning team member from Puerto Rico. “We are not ashamed of what we are; we want to express the love he gave us.

Youth across Latin America are dealing with the same problems: corrupt governments, politics, immigration and racism, she said.

On the conference’s second day, workshops were offered on how to live out the Way of Love, addressing the themes of racial reconciliation, evangelism, leadership and creation care.

The event was intended to “show the young people that they are powerful and they have to be leaders in their communities,” said Byron, 23, a planning team member from Honduras.

“It is intended to affirm, invite, inspire and equip young people for claiming their baptism and discerning their place in the church,” said Bronwyn Clark Skov, director of formation, youth and young adult ministries in The Episcopal Church, on the first day of the conference.

“Many people will compare this event with EYE. … The passion with which these young people affirm their baptism – they’re unashamed evangelists,” she said, adding that the youth are stepping into leadership roles, “and our greatest hope is that they continue to do that.”

It was important to provide a culturally and socially appropriate context for the Spanish-speaking youth to talk about what affects them, said Glenda McQueen, program officer for Latin America.

Latin American dioceses may be able to afford to send only one or two participants to conferences in the United States, and securing a travel visa is a challenge, even more so under the current administration, said McQueen.

When McQueen attended the Global Episcopal Mission Network, or GEMN, Conference in the Dominican Republic earlier this year, she witnessed young adults in that diocese making and selling breakfast to fund their attendance, and it was the same for other dioceses, she said.

“When I welcomed them the first night … this is a dream realized,” said McQueen, and others were simultaneously having the same thoughts. “My dream (now) is to see it continue.”

Panama, which is part of the Anglican Province of Central America, was chosen to host the event for its location, low regional travel costs and less restrictive visa requirements.

Holding the event in Panama created opportunity for more youth to attend.

“Accessing visas is not the easiest thing, especially for young people, so having it in Latin America, it brings more people together from the region,” Murray said. “This region is going through lots of changes and challenges, and the young people know about these changes and challenges. And they have an opportunity to talk about them and also to come up with strategies of how they go back to their countries, and they become supportive or agents of transformation beginning with change.”

The way the youth live out the call to follow Jesus impressed the presiding bishop.

“They’ve actually come together to pray, to study the Bible, to study the way and the teachings of Jesus, so that they can actually live those teachings in their lives and help their countries, and all of our countries, to actually reflect what Jesus said when he said, ‘Love God, love your neighbor and love yourself,’” Curry told the Episcopal News Service on the second day. “They’re actually doing it; they’re not just talking about it. That’s inspiration.”

“I remember being in Honduras two years ago, and it was the young people there, many of whom are here now, who wanted us to go out on the streets to do evangelism. These were Episcopal kids, and they dragged both (Honduras) Bishop Lloyd (Allen) and me, and they dragged two bishops out and we were out in the afternoon, sun hot as could be, with signs: ‘Honk if you love God,’ ‘Honk if you believe God loves you,’ and ‘Honk if you want a prayer.’ And we were doing that for a couple of hours,” said Curry. “That came from the young people; they actually are helping to lead the church back to being the church that looks like the way of Jesus and the way of his love.”