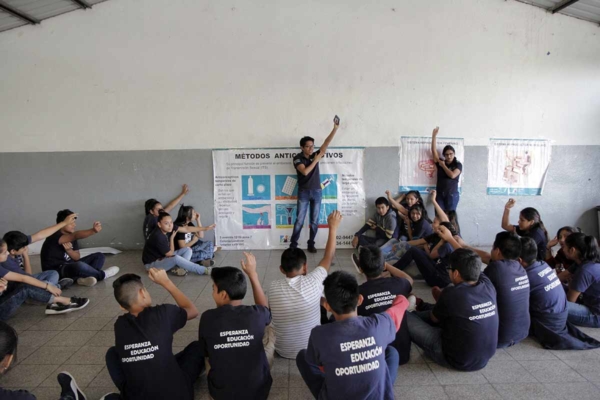 [Episcopal News Service – Guatemala City, Guatemala] Eighteen-year-old Ubelia watched as each of her four sisters became a teenage mom. As the fifth and youngest daughter in the family, she didn’t want to follow in the same path. But other than her father offering general “be safe” advice, she didn’t feel she had the education or the information to make informed choices regarding her own reproductive health and pregnancy prevention.

Enter the Guatemala Youth Initiative, a nongovernmental organization founded by Episcopalian Greg Lowden with support from others in The Episcopal Church, especially the Diocese of Virginia, wherein Lowden grew up attending Leeds Episcopal Church in Markham, 60 miles west of Washington, D.C.

“This program saved my life,” said Ubelia, her black hair tied in a tight bun on top of her head, a butterfly earring in each earlobe. “I didn’t know how not to end up like them.”

With 92 out of every 1,000 girls ages 15-19 giving birth, Guatemala has one of the highest adolescent birth rates in Latin America, which as a region ranks second in the world.

Worldwide, 20,000 girls under age 18 give birth daily in developing countries; that’s 7.3 million births annually, according the United Nations Population Fund. The pregnancy rate is even higher when factoring for unviable pregnancies; and each year, tens of thousands of teenage girls die from pregnancy complications and childbirth. 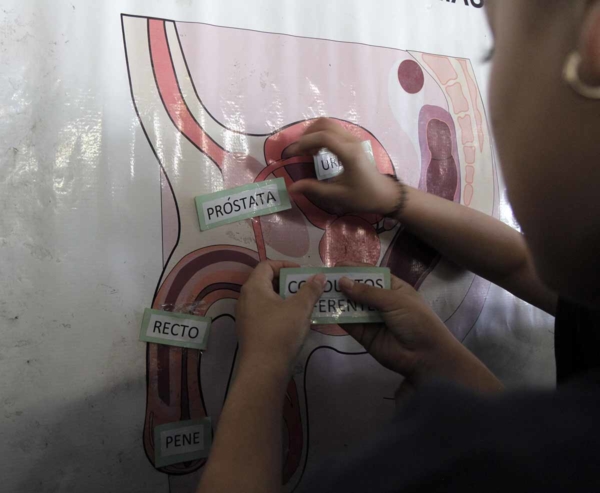 “Guatemala is a country that has fallen far behind in comprehensive sexual education, contraception and early childhood development compared to the rest of Latin America,” said Lowden. “Sex education and contraception are very much taboo subjects in Guatemala, based on the fear that they will incentivize youth to have sex. Despite contraceptives being available, most contraceptive providers have cumbersome processes for adolescents that make it unlikely for them to seek help.”

Ubelia’s father repairs radios, and her mother works seasonally selling Christmas ornaments. One of her sisters sells candy on a “chicken bus,” as Latin Americans call decommissioned school buses used for public transportation, while the others depend on their husbands. In November, Ubelia will become the first in her family to graduate high school, a special school for secretarial skills.

“I never want to depend on a man for anything; with my diploma I can get a job,” said Ubelia, identified here only by her first name to protect her privacy.

Ubelia’s family lives near the Guatemala City trash dump in a marginalized community that struggles with extreme poverty, family brokenness and crime. When Ubelia, now a peer sex educator, first encountered the Guatemala Youth Initiative during a workshop organized by another NGO providing educational services, a third girl in her social circle had just given birth. As studies show, when a girl becomes pregnant and gives birth, her education and job opportunities diminish.

“In underprivileged communities, most young girls who become pregnant are not able to continue their studies. They suffer social stigma, especially if the father [of the child] doesn’t ‘take responsibility,’ said Lowden. “Before, we saw many cases where the teen mother was either completely dependent on the father or finding a new man. Now, with access to contraception and support programs, we are seeing that pattern change.”

The Guatemala Youth Initiative focuses its work in Zone 3, one of 18 squatter communities surrounding Guatemala City’s trash dump. Residents live side by side in cement-block and sheet-metal homes constructed along narrow walkways bleached by the sun. An area the size of 40 football fields with room for expansion, the trash dump receives two-thirds of the country’s refuse. It’s the largest trash dump in Central America and employs 10,000 workers, the majority laboring six days a week from 5 a.m. to 7 p.m., making $5 a day. 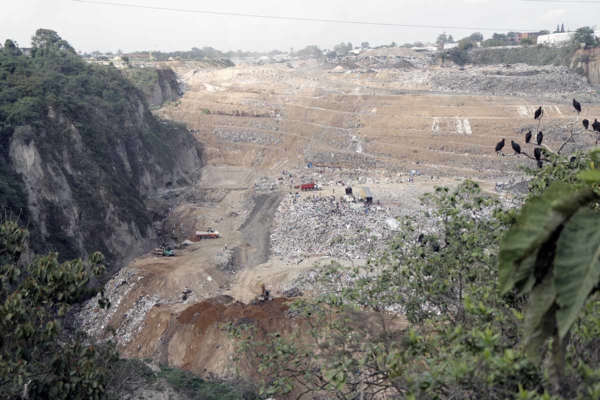 Guatemala City’s trash dump is the largest in Central America and employs 10,000 workers, most of whom labor six days a week, 5 a.m. to 7 p.m., for $5 a day. Most of its workers and their families live in extreme poverty in 18 squatter communities surrounding the trash dump. Photo: Lynette Wilson/Episcopal News Service

The dump began operating in the 1950s after the government stopped incinerating trash. In some cases, generations of families have worked there while living in the surrounding communities. Others, fleeing rural poverty, continue to arrive in search of work.

The working and living conditions in the area have attracted the attention of charitable organizations including 30-some NGOs that provide daycare, educational, health, and counseling services to workers and their families.

“The communities around the Guatemala City trash dump are some of the most marginalized urban communities in the entire country,” said Lowden.

“Youth have virtually no access to information about sexual and reproductive health, and even less support for contraception and teen pregnancy,” he said. “We decided to focus on these areas after finding that approximately half of adolescent girls (or more) are becoming teen mothers near the trash dump.”

That finding came through a deliberate evaluation of the communities’ needs. Rather than duplicate services, Lowden, who’d previously worked for an NGO and studied child abuse rates on the ground in Guatemala, decided to conduct a six-month survey of 300 students, teachers, parents and psychologists to understand the problems facing at-risk youth.

Family dysfunction surfaced as the number one problem, which leads youth to spend most of their time away from home in the streets, and to drug and alcohol use. The survey also found that half of the children in the communities were born to teen moms; nearly half of teenagers ages 15-19 were sexually active, with many having multiple partners; and, that the majority of sexually active teenagers used no contraception.

Parents’ long hours working in the trash dump and an absence of a home structure, combined with poverty and the other challenges of living in a high-crime, marginalized community, mean that sometimes the only affection youths receive is from one another, which often leads to sex.

“If you spent your childhood in a dysfunctional household without love, you are going to look for anything that resembles it,” Lowden said. “Most youth at-risk find it through sex during adolescence when the first guy or girl shows them affection.” 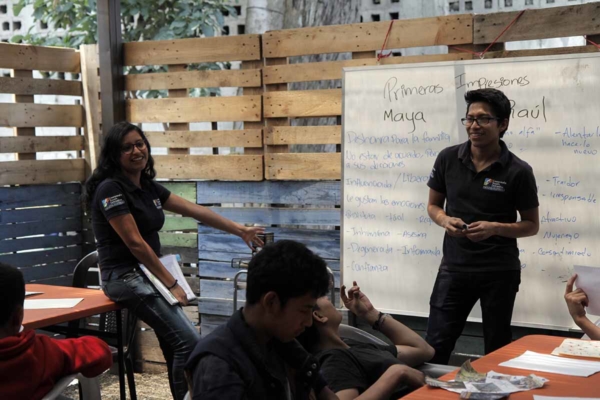 The Guatemala Youth Initiative’s Byron Paredes, sexual and reproductive health educator, and Alison Urbina, program assistant, lead a Saturday class of peer sex educators in an exercise that compared the same sexual histories of a male and female teen to reveal inherent biases that applaud behaviors in males and condemn the same behaviors in females. Photo: Lynette Wilson/Episcopal News Service

At the initiative, Byron Paredes, a sexual and reproductive health educator, and Sophie Swallow, a youth coordinator, have created a secular and a biblical version of the program, the latter making it more appealing to parochial schools. The Roman Catholic and evangelical churches keep a tight grip on society. Still, as teen pregnancy rates soar, society recognizes the need for sex education and easy access to contraception.

“We read all the parts of the anatomy and scream them so they know we’re not going to be uptight or squeamish,” said Swallow, as the workshop began.

Understandably, there’s some laughter. And to make it fun and competitive, the facilitators divide the students into two self-named teams. The teams then race to pin prepared construction-paper labels on the corresponding female and male reproductive organs. 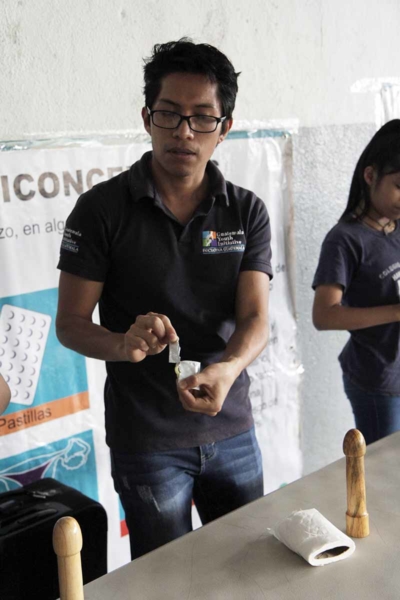 The Guatemala Youth Initiative’s Byron Paredes demonstrates how to use a condom properly during a workshop offered to middle school students at Safe Passage. Photo: Lynette Wilson/Episcopal News Service

Swallow and Paredes spent a year editing the workshop and learning how to communicate critical information quickly. Beyond anatomy and the male and female reproductive systems, workshop participants learn about consent, contraceptive methods, IUDs, implants, birth control pills, condoms and STIs. Using a wooden anatomical model, facilitators demonstrate how to put on a condom correctly.

“Condoms are the only method that protect against STIs,” said Paredes, and as he and Swallow both point out, their use requires consent from both parties.

When Paredes isn’t conducting workshops, he consults with clients one on one, answering teens’ questions and providing them with birth control; in some cases, he also consults with their parents, who may also be seeking knowledge about and access to contraception methods.

Swallow – who once transported a carry-on bag full of 3,000 condoms from the United States to Guatemala – admits that when she joined the initiative’s staff, she herself lacked adequate sex education and that Paredes educated her.

“Lack of sexual education is not a Guatemala problem, it’s a global problem,” said Swallow. “I am also a young woman who grew up in an education system that ignored sexuality. Unguided sexuality is a root problem across the globe, and it’s only more dangerous in marginalized communities like Zone 3. Avoiding the topic puts young people at great risk.”

Before joining the Guatemala Youth Initiative’s staff, Swallow, a student on leave from Middlebury College in Vermont, volunteered at a nearby school that closed abruptly. Through connections, she met Lowden; coincidentally, they both grew up in The Episcopal Church. Swallow grew up attending St. Alban’s Episcopal Church in Davidson, North Carolina. 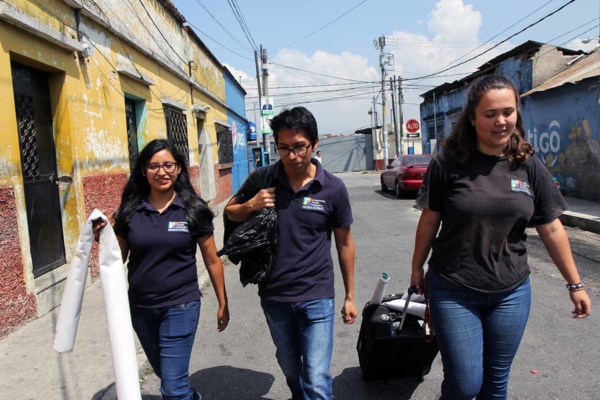 From left, the Guatemala Youth Initiative’s Alison Urbina, Byron Paredes and Sophie Swallow walk back to the initiative’s office following a workshop for some 30 students at Safe Passage, a nearby school. Photo: Lynette Wilson/Episcopal News Service

Despite being only 20 years old, Swallow, and Paredes, who is 28, know that peer sex educators are key to running a successful program. Ubelia, for instance, has become an expert, and fellow students at her all-girls school approach her for advice and information, and to correct misinformation. Like when a peer asked her if using contraception would lead to infertility, Ubelia answered, “no.”

The Guatemala Youth Initiative has trained more than 30 peer sex educators, and these teens often go beyond the basics into more profound discussions. It’s the teen sex educators who also refer their friends and peers to Paredes for one-on-one consultations.

“Local youth are perhaps the best suited to educate their peers in topics of sexual and reproductive health. Adolescents are much more likely to confide in one another, and if we arm local youth with correct information and resources, they can take the reins,” said Swallow. “Not only can they explain technical concepts, they can also empower their peers to take control of their futures. By training local youth in reproductive health, we give the power back to the people who need it most.”