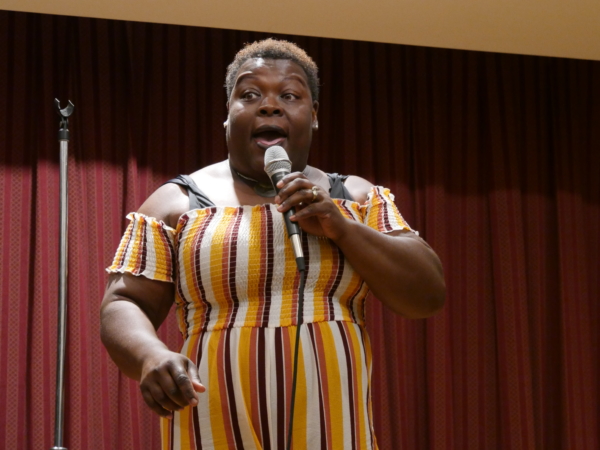 [Episcopal News Service ­­– Washington, D.C.] The litany that could be heard at All Souls Episcopal Church on the evening of July 13 was an unfamiliar one.

“Not hopeless,” the people responded.

This wasn’t a liturgical service, and the woman on the stage in the church basement wasn’t a priest. Her name was LaTonya Merritt, and she was a performer at the church’s first Prophetic Poetry Slam.

“Dirty clothes, smelling bad / sleeping on the streets, digging in the trash can for food / that’s all you see,” she recited from memory. “How ’bout: I have a job, sleep in my vehicle. / That homeless person / is me.”

With commanding confidence, she interspersed the story of her journey out of homelessness with that same call-and-response she’d taught the audience at the beginning of the poem, echoing the theme of relying on God in desperate times.

This event, unlike most poetry slams, wasn’t a competition; no judges assigned scores to the 10 performers. It did, however, feature the passionate, socially conscious spoken-word poetry that slams are known for, with a special focus on spirituality. 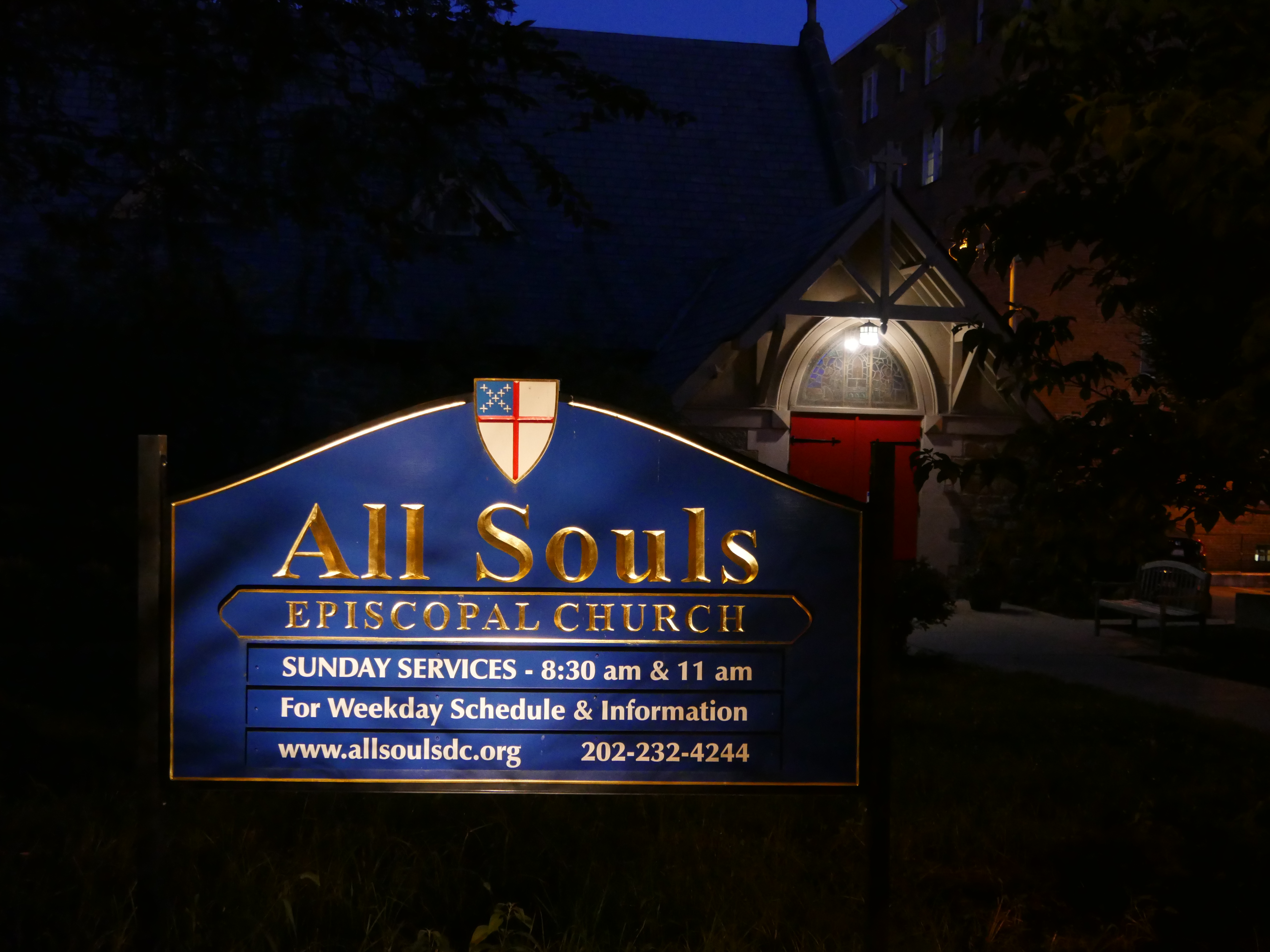 All Souls has been hosting monthly poetry nights since 2018. Photo: Egan Millard/ENS

All Souls is focusing on the intersection of faith, art and social justice as a way to reach out to the surrounding community. Tucked into the lush Woodley Park neighborhood – which borders both the establishment influence of Kalorama and the diverse immigrant enclave of Adams Morgan – the church is something of an intersection itself.

“This is a part of the outreach that we are doing to the broader community,” said Brian Smith, the church’s Christian formation leader. “We’ve really made a concerted effort to reach out to our neighborhood in general and bring people into church for different reasons.”

Last year, Smith started a monthly poetry night “to explore the art of poetry as a devotional spiritual practice.”

“All Souls has a tradition of religion and the arts,” Smith said. “There have been other poetry groups that met here in the past, so we’re kind of carrying that on.”

Smith said that the intimate monthly gathering succeeded in bringing in people “who would never have gone to church” otherwise.

“We took a summer hiatus to regroup and plan out the next program year,” Smith said, “but then we realized, we have to do something this summer. It was the rector’s idea to do a poetry slam. … We wanted to infuse a little bit more energy into the experience of poetry for people who may or may not be familiar with the slam style.”

So where does the “prophetic” element come in?

And though the topics – particularly the racist rhetoric embraced by President Donald Trump and his administration’s hostility to immigrants – may be new, the Christian response isn’t.

“Return to the law, return to love. … That’s what the prophetic tradition is about, in a way: new expressions of old truths,” Smith said.

So the poetry slam, with its tradition of speaking truth to power, seemed like the perfect way to harness the passion of a community that increasingly feels the need to speak out against injustice. That hasn’t always been easy for All Souls, said the Rev. Jadon Hartsuff, who has served as rector since 2016.

“We are here in Washington, D.C., we are surrounded by political issues, and we are a parish that is full of people who work in government … so this has long been a church that has very intentionally stayed clear of hot-button political or social justice issues just because people have wanted church to be a respite,” Hartsuff said.

Ironically, that attitude came about in part because All Souls was an early pioneer in one particular hot-button issue: accepting queer parishioners. 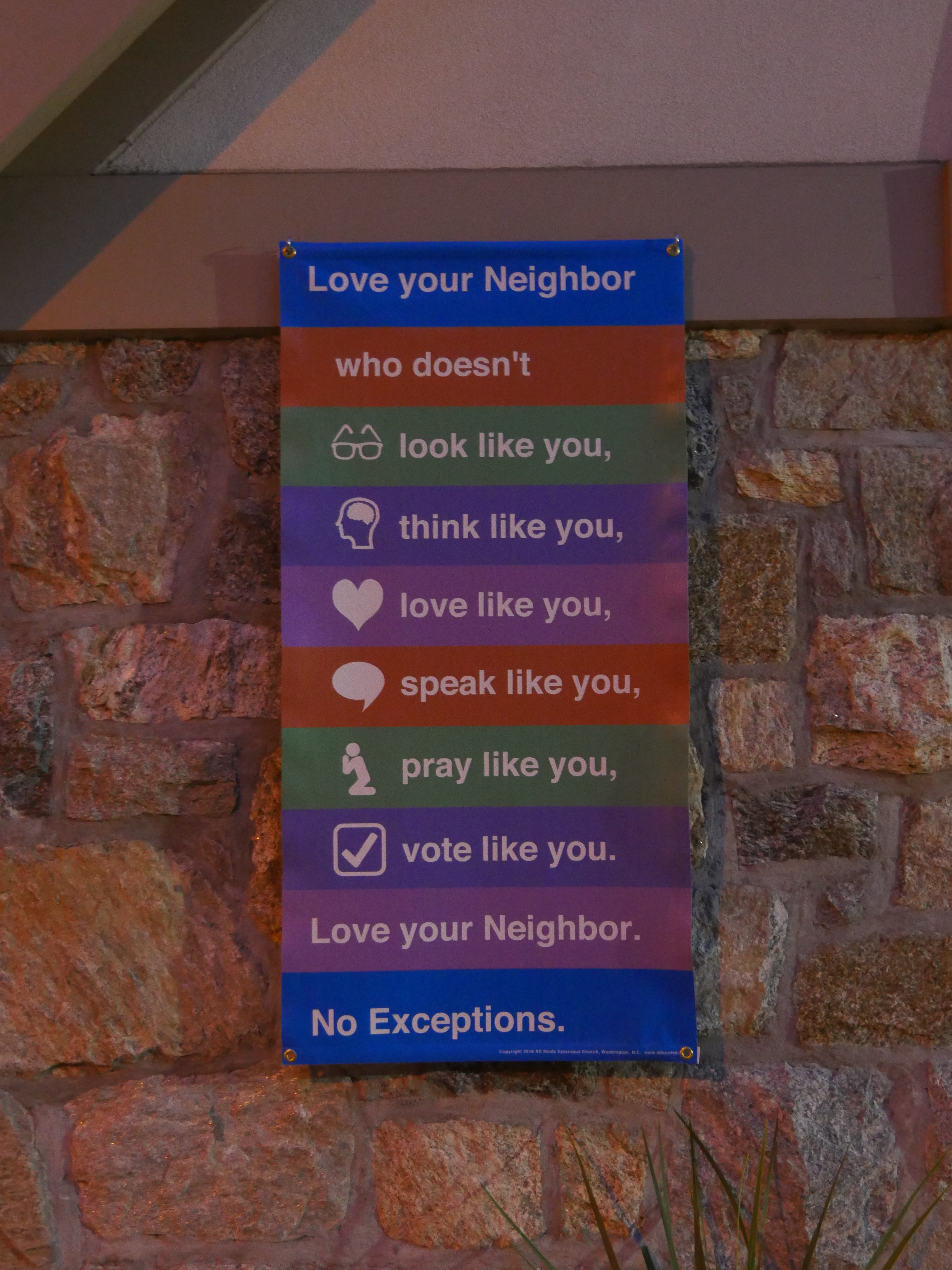 A custom-made sign greets visitors at the door of All Souls. Photo: Egan Millard/ENS

“All Souls was the first church to have an openly gay rector in this region. So the primary issue that the church felt like it was engaging was the issue of welcome to the LGBT community,” Hartsuff said. “So with that being its flagship issue, it wanted to avoid all the other issues that might divide people who were otherwise being united around that issue, because it ended up being a place where gay men and women from very different political backgrounds came together.”

But by 2016, the situation had changed, with LGBTQ people gaining widespread acceptance in The Episcopal Church and Trump upending the political and moral landscape of America.

“In the last few years, there’s been an increasingly large minority of people here who have been interested in some kind of more active, more pronounced engagement of social justice,” Hartsuff said. This led to a monthly multi-parish social justice forum, and the July 13 Prophetic Poetry Slam was intended to forge a connection between that and the monthly poetry series.

“We’re trying to test the waters and see what happens,” Smith said before the event.

What happened was a mix of personal and political, painful and healing. With rhymes ringing off the walls, the first poet poured out her anguish over her sister’s death, wondering what God’s purpose could be.

Laurel Blaydes sang a cappella of the struggle to persevere in the face of disillusionment:

“I can see by the look in your eye / that you feel like your leaders mislead you / and you’re tired of delusions and lies / But I can also see / that you didn’t stop there / You have moved to take the vision of the future / way beyond despair,” she sang. 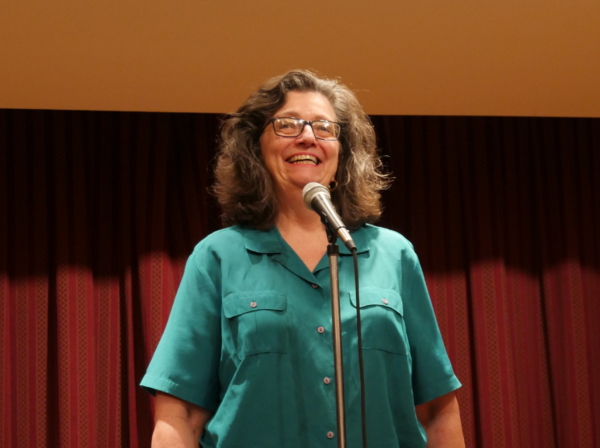 Merritt, in addition to sharing her story of homelessness, performed a piece that pointed out the ironic dichotomies in American society: poverty and conspicuous consumption, homelessness and gentrification, “Black Lives Matter” and “All Lives Matter.”

Other performers spoke of feeling judged in church and the guilt of judging others, struggles with learning disabilities and incarceration, and the gap between what Jesus left unsaid and what he did say. Inspired by the trending Twitter hashtag #thingsJesusneversaid, one poet wondered how anyone familiar with the Gospels could be confused about how Jesus would react to fossil fuel emissions polluting the air and jeopardizing the survival of humanity. Jesus, he said, never talked about oil, “never spoke of dinosaurs, giant lizards / sinking into the rocks, becoming a liquor for our society. … He didn’t have to.” 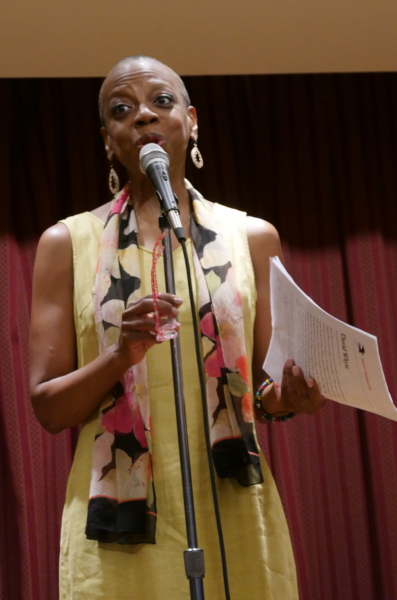 The performers were evenly split between regular parishioners and people from outside the parish. That’s because All Souls invested in highly targeted Facebook ads to advertise the slam.

“We have an active two-week-long Facebook ad for this event that is focused on young adults who have expressed on their Facebook profile that they have an interest in either poetry or social justice,” Hartsuff said.

Those ads are funded by a grant from the Lilly Endowment administered through nearby Wesley Theological Seminary’s Innovation Hub. The program aims to connect activist millennials in Washington with local churches through engaging, collaborative projects. The Innovation Hub provides training, research and support, in addition to the grant funds.

For Hartsuff, the effort is as much about getting a new image of the church out there as it is about the event itself. 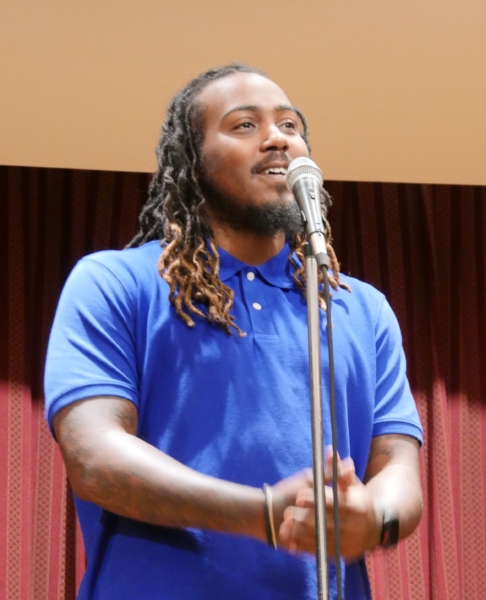 “We have been trying to create and present different kinds of events that … 20-somethings who don’t go to church might see and be surprised that a church was offering,” Hartsuff said. “And even if they didn’t come to it, it would begin to shift their understanding of what our church and maybe the church at large is doing,” Hartsuff said.

The investment in Facebook ads paid off. Myke Gregoree, who hadn’t been to All Souls before, said he came across the event on Facebook and “it seemed like it was up my alley. … It definitely was the name that spoke out to me and it made me feel welcome.”

Merritt, also a first-time visitor to All Souls, had the same experience while scrolling through Facebook.

Both Merritt and Gregoree expressed interest in coming back when the regular monthly poetry nights return. And most people lingered long after the slam ended, talking over wine and snacks about the power of catharsis. There were knowing nods, exchanges of email addresses, and a sense that All Souls was a little bigger than it had been just a few hours earlier.