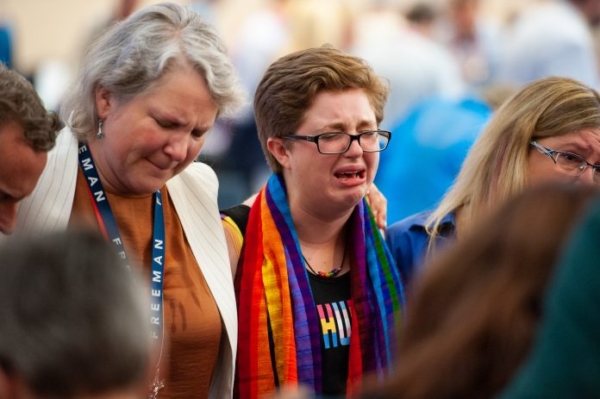 Lyds Keesmaat-Walsh, delegate from the Diocese of Toronto, weeps in the immediate aftermath of a July 12 vote on a motion to amend the Anglican Church of Canada’s marriage canon. The motion, which would have allowed for same-sex marriage in the church, failed to pass by a few percentage points in the Order of Bishops. Photo: Milos Tosic/Anglican Journal

That was how Primate Fred Hiltz — paraphrasing the observation of delegate Michael Chartrand — described the pain in the room following the failure of the 42nd General Synod to pass a resolution amending the marriage canon, which would have allowed for the solemnization of same-sex marriage.

“Those words are going to haunt the Anglican Church for a long time,” says Sydney Brouillard-Coyle, a youth delegate from the Diocese of Huron who identifies as gender non-conforming, queer and asexual. Though members of General Synod had long been preparing for upheaval after the vote on July 12 no matter the outcome, when the results finally came, the anguish it caused for LGBTQ Anglican youth almost defies description.