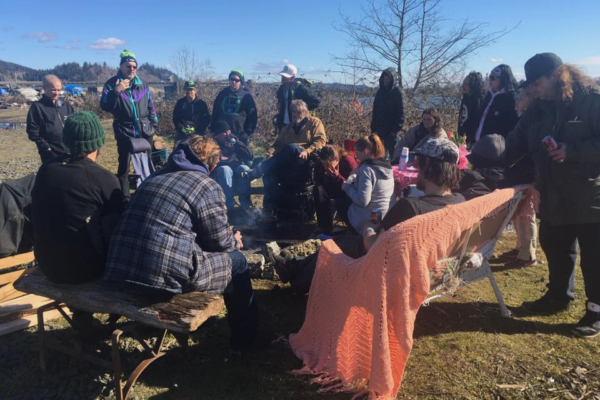 About 100 people live in a homeless encampment on the Chehalis River in Aberdeen, Washington. Photo: Sarah Monroe

[Episcopal News Service] A group of Episcopal chaplains who for several years have ministered to homeless individuals in the coastal communities of Grays Harbor County, Washington, are standing in support of about a hundred people who face eviction from a riverbank encampment in Aberdeen.

The legal battle over the fate of the encampment, which the city has long sought to clear, could enter a new phase next week. The city announced it would conduct “a comprehensive clean-up of the property” starting July 15.

The Rev. Sarah Monroe, founder and priest-in-charge of Chaplains on the Harbor, a mission station of the Diocese of Olympia, is a plaintiff in the residents’ lawsuit seeking to stop the city from clearing the encampment on the Chehalis River. She regularly visits the encampment and counts the residents there as her parishioners.

“The request was not so much to stay. The request was the city be obligated to provide somewhere for people to go,” Monroe told Episcopal News Service in a phone interview last month. She acknowledged that sleeping in tents by a river isn’t an ideal long-term solution to homelessness in Aberdeen. “What we’re arguing is people deserve some place that’s safe.”

Such homelessness ministries have the strong backing of the diocese and are being followed closely by churchwide leaders. Presiding Bishop Michael Curry spent time with the chaplains during a pastoral visit to the diocese in June 2018, and his staff members have kept in touch with Chaplains on the Harbor as it puts pressure on city officials to respond more compassionately to homeless individuals.

“The theological underpinning of our faith expressed in the Bible contains numerous directives to provide help for the poor, the sojourners, the strangers and the homeless. Jesus himself was described as homeless,” the Rev. Melanie Mullen, The Episcopal Church’s director of reconciliation, justice and creation care, said in a written statement for this story. “Relationship with those experiencing homelessness is central to who we are as Christians.”

Aberdeen, with about 17,000 residents, is the largest city in Grays Harbor County. These communities about 100 miles southwest of Seattle have struggled with an economic slump for decades amid sawmill closings and the decline of the timber industry. Aberdeen native Kurt Cobain was homeless briefly in the 1980s before fronting the band Nirvana. Though Grays Harbor County’s business community has encouraged growth through tourism and courting wealthy transplants, the county’s incomes and employment rates remain considerably lower than state and national averages, according to a report released in May by Greater Grays Harbor, the regional chamber of commerce and economic development council. An affordable housing shortage has further complicated the picture.

A Grays Harbor County Public Health and Social Services report estimates as many as 3,000 of its 70,000 residents lacked stable housing, and 500 to 700 were considered fully homeless. Chaplains on the Harbor has been ministering to about 500 people, including some facing Aberdeen’s deadline to leave the contested city-owned property on the river.

“We’re talking about fellow human beings, and they need a place to live,” said the Rev. Bonnie Campbell, an Episcopal priest who is on the 11-member staff at Chaplains on the Harbor.

On July 10, the City Council approved Mayor Erik Larson’s $30,000 proposal to set aside the City Hall parking lot as a temporary encampment while Larson pursues negotiations for a long-term site.

Aberdeen Mayor Erik Larson says homeless in the River Camp got 72-hour notices this morning to pack up and move from the banks of the Chehalis River… and the city will allow them to temporarily put up tents behind city hall. #komonews pic.twitter.com/coImPvLXII

Aaron Scott, another leader with Chaplains on the Harbor, said the uncertainty has been difficult for people living on the riverfront. He and the rest of the team have remained focused on providing pastoral support.

“We’re still kind of in the mindset of trying to prepare as best we can and support people in preparing for this displacement,” Scott said in an interview with ENS.

Though legal advocacy has taken the spotlight recently, Monroe and the other chaplains, several of whom were once homeless themselves, started their ministry about six years ago by simply meeting homeless individuals on their own turf. 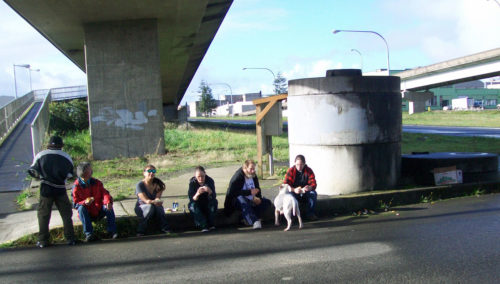 The Rev. Sarah Monroe, far right, began her ministry with homeless people in Aberdeen, Washington, by getting to know the folks who hang out under a bridge that connects two parts of the coastal town southwest of Seattle. Photo: Glenn Stone

In the early years, in addition to developing trusting relationships, Chaplains on the Harbor launched programs common to homeless ministries around the country, from free meals and clothing drives to street worship services. In 2014, Monroe’s nascent work was bolstered by a one-year Justice and Advocacy Fellowship from The Episcopal Church.

She once counted herself as one of them. While finishing seminary, she spent about a year homeless, sleeping on acquaintances’ couches. Those days are behind her, but Monroe said the experience informs her work as a priest. She was ordained in 2014, not long after starting Chaplains on the Harbor. 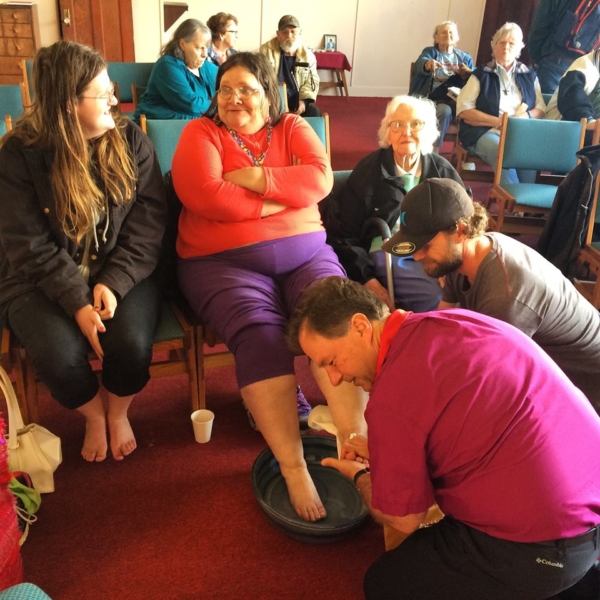 The ministry has enduring financial support from the Diocese of Olympia, and Bishop Greg Rickel is a prominent booster, participating each year in the Maundy Thursday service held at Chaplains on the Harbor’s church property in Westport.

“For the past six years, Chaplains on the Harbor has worked to build ministry and leadership in Grays Harbor County, one of the poorest counties in our diocese,” Jim Campbell, the organization’s treasurer, said in a written statement. “We have built a strong presence in the diocese, and we have raised up powerful leaders to both direct the organization and speak truth on a local and national level.”

Most of the people Monroe serves are young, ranging from about 18 to 35, she said. Those who aren’t “couch surfing” are forced to survive on the streets. For years, the group on the riverfront has been targeted by the city for periodic sweeps, though each time the encampment residents returned.

In 2018, the city purchased the property with plans to clear it for good, and initially visitors were barred from accessing the site without a permit. When Monroe was denied access, she sued the city and argued successfully that she should be allowed to continue her pastoral work with the people living on the riverfront.

When she signed on to a second lawsuit seeking to block the city’s actions against the encampment, it was in the spirit of empowering the other plaintiffs to be heard, drawing on a core principle of Chaplains on the Harbor’s work.

“For me, the key to addressing that is to raise up and listen to and provide a platform for leaders in poor communities to develop,” Monroe said. Putting her name on a lawsuit “gives weight to their struggle, but it’s their struggle.”

They cheered in May when the judge in the case put a temporary hold on the city’s eviction plan, but that hold has since expired. Aberdeen officials pledged to give people at the encampment three days’ notice before clearing the property. After that, though their struggles may continue, so will support from Chaplains on the Harbor.