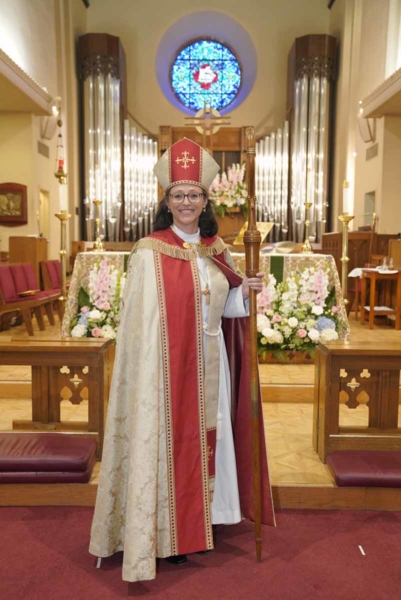 Presiding Bishop Michael Curry led the service as chief consecrator. The Rev. Bruce Jackson, rector of St. John the Baptist, Glendale, Arizona, was the preacher. Pictures and Traquair’s first message to the diocese are here.

On June 30, the newly consecrated bishop was enthusiastically welcomed and seated at Trinity Cathedral, Sacramento, California at the 11:15 am service. Her formal seating in the cathedra, or bishop’s chair, is symbolic of the teaching ministry of a rabbi or a bishop from the early church. The bishop wrote about this connection in a second message to the diocese, which you can read here.

Traquair was chosen as bishop during a Special Electing Convention held at Faith Church, Cameron Park, California, on Feb. 9, 2019. Traquair had served as the canon to the ordinary in the Diocese of Arizona since 2013, assisting Bishop Kirk Smith. Previously, she was vicar of Church of the Apostles in Oro Valley, Arizona, from 2008- 2013. She also served in churches in Arizona, Northern Indiana and California. She was ordained to the priesthood in the Episcopal Diocese of Los Angeles in 1992.

Traquair grew up in Santa Barbara, California.  She received her Bachelor of Arts degree in anthropology and public policy analysis from Pomona College. She earned her Master of Divinity at Seabury Western Seminary in Evanston, Illinois. Traquair and her husband, Philip, have two grown children.