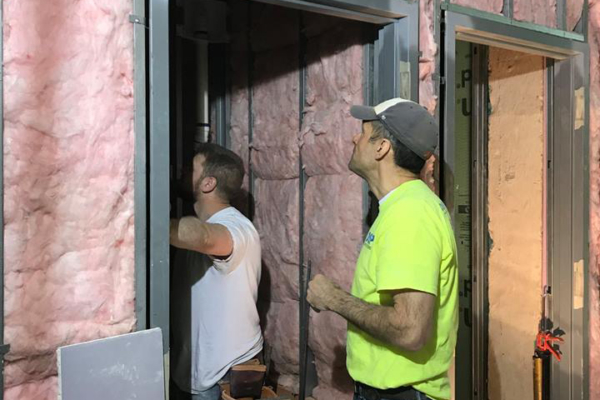 [Episcopal News Service] St. Peter’s Episcopal Church in the Corktown neighborhood of Detroit, Michigan, is a small congregation, with only about 30 active members, but those members are committed to “doing the right thing for the community that we’re located in,” Janet Ray told Episcopal News Service.

Her congregation, Ray said, is known as a “social justice church.”

“Church doesn’t only happen on Sunday,” she said. On other days of the week, the parish hall serves as a kind of social justice hive, providing space for meetings of the local lawyers’ guild, a water board and a peace team, among other organizations. And every weekday, from 7 to 11 a.m., St. Peter’s basement becomes a dining room for the Manna Community Meals that are served to 150 to 200 needy guests, many of them struggling with homelessness in this gentrifying neighborhood.

St. Peter’s has been involved with the ecumenical Manna Community Meals since 1976. It was through those meals that volunteers hatched the idea for the church’s major new social justice project: Corner Shower and Laundry.

The Episcopal Church’s United Thank Offering recently announced it was awarding a $70,000 grant to help St. Peter’s complete renovations and construction in its basement for use by soup kitchen guests who have no place to clean up before returning to the streets. Through Corner Shower and Laundry, they will have access to four private shower stalls, as well as sinks and bathrooms, and they will be able to wash their clothes in three washers and dryers at the facility.

“It’s really a beautiful thing, having an ecumenical effort coming together to help people who are the most vulnerable, and so St. Peter’s is proud to be a part of having it housed there,” said Ray, who represents the church on the board of Corner Shower and Laundry, now an independent nonprofit.

This project has been a long time coming, and its origin story is woven from numerous threads. “A diverse group of volunteers helping out at Manna Community Meals saw an opportunity to provide additional services to the Manna Meal guests,” the project’s website said. “This group of volunteers joined together to create the vision of providing those in need with a means to a fresh start.”

A lot of the credit for the idea goes to one longtime volunteer, Eugenia Bajorek, who said in a radio interview that she often brought free clothes and toiletries for the men whom she and the others were serving at Manna Community Meals.

Organizers drew motivation from another experience, recounted on St. Peter’s website. A homeless man was attending a Sunday worship service when he suffered a seizure and was taken to a hospital. The congregation later learned that his legs had been amputated to prevent an infection from spreading.

Could a shower and laundry ministry have saved the man’s legs? At least it would have provided him with “access to clean socks, soap and water for his wounds and people to surround him to get the care he needs,” the church website says.

The idea began gaining momentum around Christmas 2014 when Ray welcomed Sue Goldsmith and her family to help clean out the church’s basement. Goldsmith, who is Jewish, chose to volunteer at St. Peter’s for a Mitzvah Day, an interreligious day of service commonly timed for Christmas, with Jews and Muslims supporting neighbors who are celebrating the Christian holy day.

While they worked, Ray explained to Goldsmith the idea for a shower and laundry ministry. The project attracted Goldsmith’s interest, and in the new year, she returned to the church to help get it off the ground.

Goldsmith, who lives in a northwest suburb, still attends her own synagogue, but as a Corner Shower and Laundry board member, she sometimes visits St. Peter’s on Sundays and refers to it as “my church.”

“I love the warmth that comes from that congregation,” Goldsmith said in an interview with ENS. “It’s a small congregation, but it’s a mighty congregation.”

Ray, Goldsmith and about a half dozen others from diverse faiths and personal backgrounds formed the core group that moved the project forward in 2015. They enlisted graduate students from the University of Michigan to conduct a needs assessment for the project, to confirm that the services would be used.

“We didn’t really want to do a shower and renovation unless people would use them and it would not be a duplication of services,” Ray said.

The students surveyed dozens of regular guests at the Manna Community Meals and also studied other shower and laundry facilities around Detroit. They concluded that Corner Shower and Laundry would be a welcome addition to the neighborhood and recommended that the ministry focus on “privacy, cleanliness, and safety when designing the facilities,” according to a report from the students.

The project incorporated as a nonprofit and began holding fundraisers as it moved forward with developing the facility. Bajorek said she knew an architect who was willing to help them design a floor plan. Organizers also recruited contractors to estimate what it would take to convert the space for its new use, from foundation work to utility upgrades.

By 2017, volunteers and contractors had produced professional design drawings, removed asbestos, repaired leaky waste pipes, identified a new boiler big enough to produce enough hot water for the showers and washers, and determined how much electricity would be required. The basement’s foundation was partly demolished so that sturdy construction could begin from the ground up.

In February 2018, Corner Shower and Laundry announced it had approved a contractor for the full renovation of the basement and installation of the showers and laundry. The cost was estimated at about $250,000, and although less than half that amount had been raised, the group decided later in the year to begin construction. 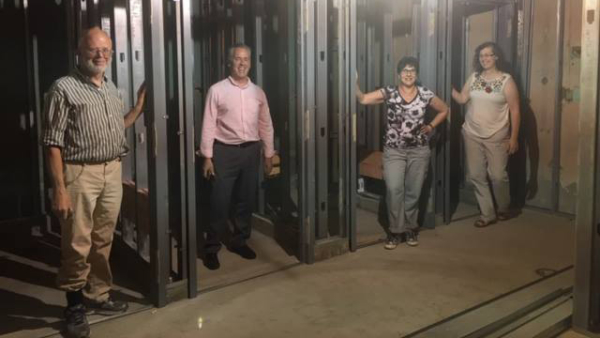 Volunteers provided free labor, when appropriate, and organizers continued to host fundraisers and issue calls for donations. In February 2019, Bajorek’s sister, Sue Laabs, pitched the project to a local philanthropic organization called 100+ Women Who Care Northville, based in a northwestern suburb. The group’s members responded by voting to give $13,500 to Corner Shower and Laundry.

The shower ministry was still short of its fundraising goal, but it has since raised what it needs for the construction phase with the help of the United Thank Offering grant, Goldsmith said. Construction is moving along slowly but steadily, and she is hopeful that the showers and laundry will be ready to open by the end of this year.

It is expected to be run by a mix of volunteers and paid employees, possibly including some social work professionals who are trained to assist people living on the margins of society, Goldsmith said. Some of those details are still being worked out, including what revenue streams will support ongoing operations.

The ministry also hopes to offer supportive employment to the guests from Manna Community Meals. They will have access to the showers and laundry during the meals’ morning hours, and the goal is to hire some of them in the afternoons to help operate a commercial laundry, which will bring in revenue for the ministry.

Some foundations and donors “did not want to invest in something that did not already exist,” Goldsmith said, but she thinks it will be easier to raise money for the project once it is up and running.