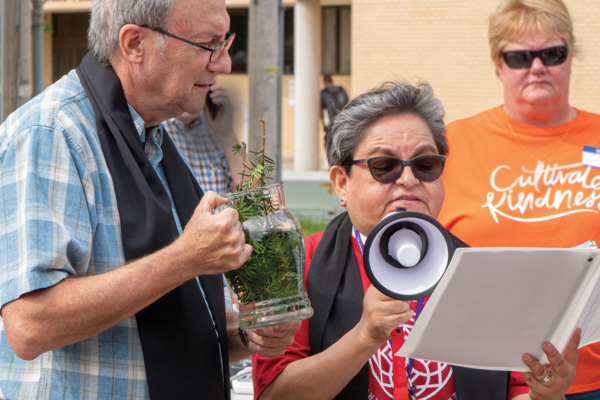 The Rev. Arland Wallace, left, assists the Rev. Eli Montes on June 1 as she prepares to bless the ministries taking place in the parking lot across the street from St. John’s Episcopal Church in Wichita, Kansas. Photo: Tom Pott

[The Episcopal Diocese of Kansas] For more than 25 years, St. John’s in Wichita, Kansas, has provided sacks of sandwiches every Saturday to people in need. But in recent months, the church has partnered with organizations to serve even more people in new ways. And through it all, the church has maintained a ministry of presence to people who are homeless in downtown Wichita.

Late last year, the church moved its Sandwich Saturdays distribution from an area behind the church to a vacant parking lot across the street to make it easier to hand out its 200 meals. That led Joshua Reed, a nurse practitioner who had developed a model for street medicine, to ask if he could bring his new medical trailer to the parking lot to provide care for people who came to eat, and others. Then, later in the spring, the church was approached by Family Promise, a group that helps homeless families, about using a vacant building the church owns for part of its work.

Together, these efforts have resulted in what the church has labeled “St. John’s Urban Ministries.”

Shirley Orr, St. John’s senior warden, said these partnerships reflect the fact that “we are an urban church serving an urban population.” She said the church wanted to be a better neighbor to the community around it. Those efforts have “radically transformed the congregation,” she said, prompting a more intentional effort to serve those who rely on the shelters and soup kitchens in the neighborhoods around the church. Orr said, “Our hope is that people see that we have a social justice mission and are trying to be the hands of Jesus in the world.”

Medicine for people on the street

That effort rang true with Reed, who grew up attending St. Paul’s in Clay Center, Kansas, before drifting away from the church as a young adult. As a nurse working in a variety of clinics and hospitals, he saw patients arrive with serious complications that could have been avoided if they had access to medical care that didn’t require a phone to make an appointment or a car to get there. He researched best practices for care with those who are homeless and spent time in Pittsburgh, Pennsylvania, to see if a model of street medicine could work. He came back to Wichita convinced it could.

While working full time in an area emergency room, he started the ICT Street Team, a registered nonprofit (ICT is the airport code for Wichita). It consists of a trailer with exam tables stocked with everything a health care professional would need to treat the kinds of conditions Reed’s team sees in homeless patients: wound care, lesion removal, and management of chronic illness including COPD and asthma, high blood pressure and diabetes. Donations from pharmaceutical manufacturers allow him to provide antibiotics, insulin and other medications without charge. Meds that need to be kept refrigerated, along with other supplies, are stored in an office space that the church provides. 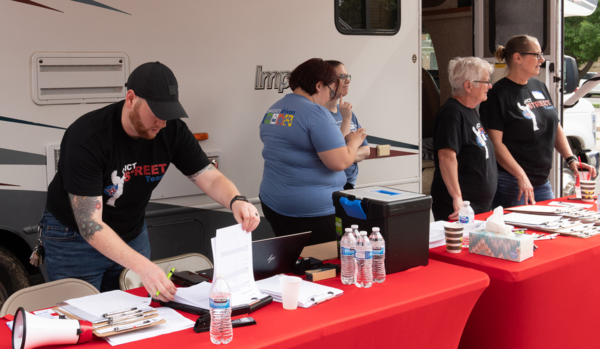 Josh Reed, left, the founder of the ICT Street Team clinic, and other volunteers get ready to see patients outside the mobile medical clinic. Photo: Tom Pott

Reed said the Street Team provides key aspects of care for people living on the streets – availability and consistency. They are in the parking lot across from St. John’s every Wednesday and Saturday morning. When they hand out medicine for high blood pressure, or insulin for diabetics, they ask people to return for follow-up testing. And patients know they will be there.

Jeremy, a 27-year-old man, recently stopped by the mobile clinic because he needed help with his diabetes. He had been hospitalized to try to get his blood sugar levels under control, and while there, he lost his job and with it his health insurance. After being released, he had gone three weeks without insulin, which now costs nearly 10 times what it did five years ago.

When Jeremy stopped by a recent Street Team Saturday clinic, his glucose level was in the 400s, far above the normal of around 100, leaving him feeling tired all the time, even with plenty of sleep. Reed was able to provide insulin and syringes and asked Jeremy to return the following Wednesday to get his blood checked again.

Reed and those who work with him are all volunteers, and the cost of the trailer and other supplies is covered by private donations and partnerships with other organizations.

During most clinic sessions, the Street Team will see as many as 30 patients, with about a quarter of them new each time. On the first Saturday of the month, however, the clinic expands and hands out donated clothing and sleeping bags, while other groups provide breakfast and other items. On those days, they can see more than 60 patients.

Just being there for people 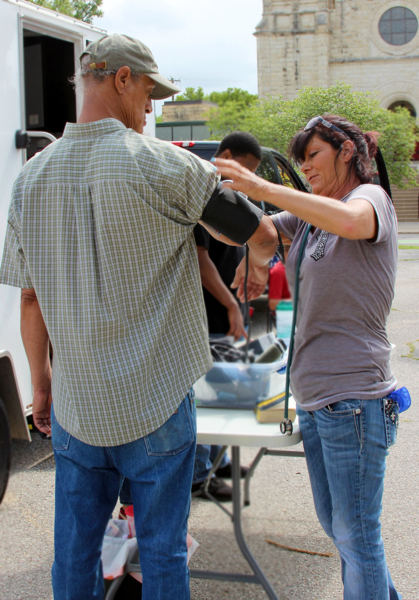 A nurse takes the blood pressure reading for a patient at a clinic run by the ICT Street Team, a partner with St. John’s Church, in Wichita. Photo: Melodie Woerman

St. John’s rector, the Rev. Eli Montes, is present both days of the week that Reed and his team see patients, and the Rev. Arland Wallace, a deacon, joins every Saturday. They visit with folks who stop by, offering bottled water and kind words. People say it makes a difference.

Walter, a tall man with a keen mind and sharp wit, said both the Street Team and St. John’s helped him through a recent medical crisis. He wasn’t feeling well, and Reed’s team discovered his blood pressure was sky high. They sent him to the hospital, where after four days, he was discharged with a prescription. With no money in his pocket, he returned to the parking lot, only to find it wasn’t a day the Street Team had a clinic. He crossed the street, knocked on the church door and was greeted by Montes, known by everyone as “Mother Eli.” She researched the cost to get his prescription filled – $4 – and gave him money to pay for it. But then, Walter said, “We sat and talked. She prayed with me. That was a low moment, but God and the church helped. That renewed my faith. It wasn’t just the $4; we talked. It encouraged me on the right path.”

Shorty, who wears a ball cap and a crucifix, said that Reed’s efforts helped save his life after he got off drugs and alcohol by going cold turkey alone in his shack by the railroad tracks, last winter. He ended up in the hospital where Reed was working, diagnosed with kidney and liver disease. “Josh told me he could help me if I would let him,” Shorty said. With his conditions now stabilized with medications, he said, “God sent them to help and save me.”

He said people on the streets know that “St. John’s has always had a love for us,” noting the annual memorial service in December for people who have died on the streets. But the united efforts with the ICT Street Team have expanded that. “We love them,” Shorty said. “There is love everywhere we go.” One of the Street Team nurses, working with the Wichita Police Homeless Outreach Team and the city’s Housing Authority, was able to get Shorty into an apartment, with rent and utilizes provided for two years.

Montes said the partnership of the medical team and the church has helped to create a sense of community for those seeking help. “What I experience every Saturday is beyond my imagination,” she said. “People feel acknowledged, loved and cared for. They are seen. They aren’t invisible anymore.”

St. John’s presence took a liturgical turn on June 1, one of the large first-Saturday clinic mornings, when Montes formally blessed all those serving and being served in the parking lot. 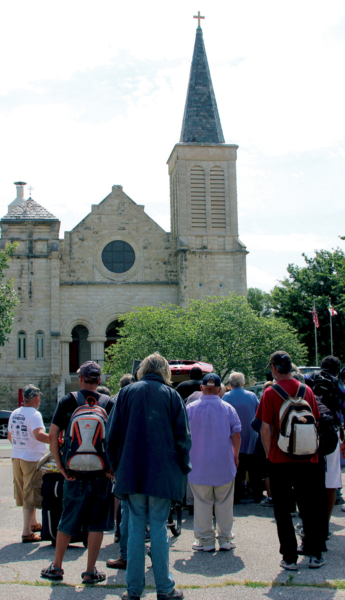 People line up to get a sack lunch every Saturday in the parking lot across the street from St. John’s. Photo: Melodie Woerman

But St. John’s tends to more than just spiritual well-being. There is a lending library, run by retired teachers Peggy Karr and Marlene Franklin, who seek out donated books and often scour used bookstores to meet requests from those who stop by the table they set out each Saturday. Westerns and science fiction are favorites. The women do this as a labor of love because, according to Karr, “A life without reading is a life without happiness.”

And the partnership with Family Promise soon will result in space to help more people. That agency is renovating an empty building of St. John’s next to the church that it will use to help more homeless families move into sustainable independence. The building will provide services such as adult training and child care, with families heading to partner churches every evening to sleep.

Church is the most important partner

Reed said that St. John’s is the most important partner for the ICT Street Team, surpassing even those who donate or provide free goods. The church’s eagerness to support his street medicine plan made a real difference. “Without them we couldn’t have gotten off the ground so quickly.”

He said that even though Wichita has decriminalized being homeless, there remains a stigma about having homeless people on one’s property. “But homeless people congregate around the church, and they know they won’t be run out,” Reed said. “These are people who sometimes are on drugs or with mental health issues, or prostitutes or drug users, and people who are drinking, and [St. John’s] has taken the high road. The church is very embracing.”

– Melodie Woerman is the Diocese of Kansas’ director of communications.