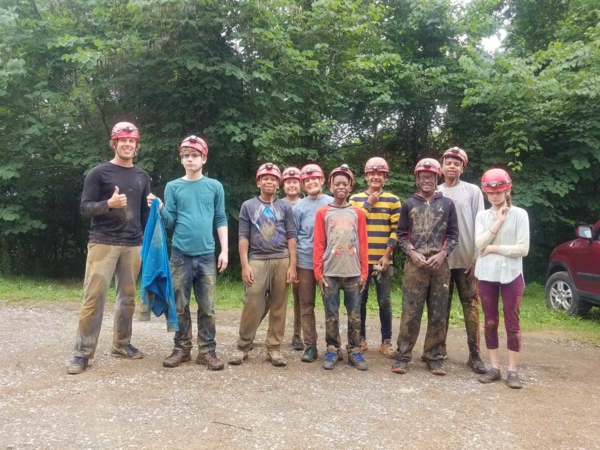 [St. Andrew’s On-the-Sound – Wilmington, North Carolina] For the week of June 17, the Rev. Sarah K. Smith, St. Andrew’s On-the-Sound’s assistant rector, wasn’t in her office at the Wilmington, North Carolina, church. In fact, for most of the week, she wasn’t even within cell phone range. No, rather than leading her congregation in daily morning prayer or the weekly healing service as she normally would, Smith was in different woods every morning, leading reflections with a disparate group of teenagers from congregations around the state.

For the third year, Smith and co-leader Daniel Sockwell accompanied young people from around North Carolina on Trek, an opportunity to engage with God in new and unique settings while strengthening bonds with individuals from different communities. This year’s experiential formation brought together diverse youths from church communities in Wilmington, Winston-Salem and New Bern for a week of tent camping, community outdoor meal preparations, and adventure activities such as canoeing, rock climbing, caving, whitewater rafting and zip lining.

This year was different than years past, as there were no representatives from Smith’s own church and a broader range of ages, with middle schoolers joining the typical high school participants.

“I had no idea what to expect from the kids,” said Smith, meeting most of the participants for the first time on the first night of the trip. “I’m excited about the energy from our youngest ones!”

The kids were in for new experiences as well. As they were driving to Table Rock, one of the Wilmington boys asked why his ears felt funny. He’d never needed to pop them before. It was in that moment that Smith realized just how new and different this experience might be for this year’s group. Beyond the standard new experiences of rock climbing or whitewater rafting, this year’s Trek, with a significant majority of the participants there through scholarships offered by various congregations, was an opportunity for these youths to get out of the only environments they’ve ever known. It also was an opportunity for suburban Episcopal youths to interact with young people from a rural Spanish-speaking Presbyterian congregation and from two African Methodist Episcopal Zion Church congregations based in Wilmington.

“I act more like myself when I’m not around people I know,” said Zion Moore, one of the boys from a Wilmington church. Sindy Santana, a member of the Spanish-speaking congregation, added, “I learned that I can be a nice person.” When pressed on what they meant by those comments, both explained that Trek had become an opportunity to explore themselves outside the often-fraught environments of their “normal” lives. It’s no surprise such insights were reached, as this year’s Trek theme – reflected in Scripture readings and journaling prompts – was stories: what stories we tell about ourselves to ourselves, what stories we allow others to tell about us, and what we hear if we listen for God’s story about us.

Trek leaders participated in daily journaling and reflections as well. In response to the daily prompt, “Where did you experience God today?” co-leader Sockwell reflected, “On the river, our guide told us they’re trying to get the Nolichucky designated ‘wild and scenic,’ which means it won’t ever be developed, it’ll always be the beautiful creation God made.”

This led the group to a discussion of the Genesis story and what it means to be stewards of creation. Together, the Trek group came to the realization that if all are made in God’s image, then they become closer to God by becoming closer to each other. In getting to know each other in such a richly diverse group, one that is truly reflective of the Kingdom of God, every single person who spent that rainy week on Trek was able to know God more fully, know God’s story more fully, and better understand the stories they are in the act of creating.

“If you’re scared, you should know that God has your back, like when I was rock climbing,” said participant Tyshaun James. “If I’m scared, I just have to build a little self-confidence.” Listening to God’s story in order to reshape their stories of themselves – that’s what this year’s Trek was all about.

If your congregation would be interested in sponsoring a Trek for your community or for further conversation about the joy of adventure catechesis, contact sarah@saots.org.

– Colin D. Halloran is a Wilmington poet and author who attends St. Andrew’s.