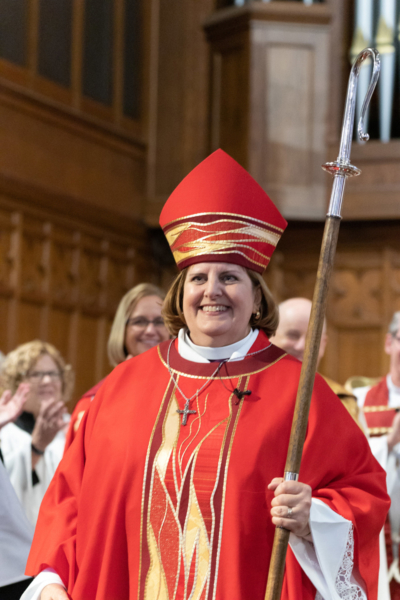 Assisting Bishop Katharine Jefferts Schori led the service as chief consecrator. The Rev. Scott Gunn, executive director of Forward Movement, was the preacher. Following the service, a celebratory reception was held at The Abbey next door to St. Paul’s Cathedral.

On June 30, the newly consecrated bishop will be formally welcomed and seated at St. Paul’s Cathedral at the 5 p.m. Evensong service. Her seating in the cathedra, or bishop’s chair, is symbolic of the bishop’s office.

Brown Snook was elected bishop on the first ballot at a special convention of the diocese on Feb. 2. She has served as the canon for congregational growth in the Diocese of Oklahoma since 2017. From 2006 to 2017, she served in the Diocese of Arizona as the church planter, vicar and then rector of a new Episcopal Church in Scottsdale, Arizona, The Episcopal Church of the Nativity.

Brown Snook attended college at Rice University in Austin, Texas, where she earned her bachelor’s in English and managerial studies, and her master’s in business administration, and accountancy. She and her husband, Thomas Snook, have two adult daughters, one of whom lives in San Diego.

Brown Snook succeeded the Rt. Rev. James Mathes, who had served for 12 years. The Episcopal Diocese of San Diego was established in 1973 and has approximately 15,000 members across 43 congregations in the Southern California region.