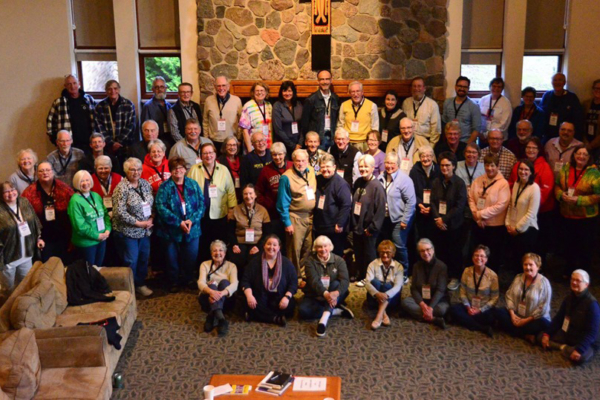 [Episcopal News Service] The Diocese of Eastern Michigan is poised this year to finalize a partnership with the neighboring Diocese of Western Michigan in which they would share a bishop, increase collaboration and pool resources – a process of experimentation and dialogue that eventually could lead to a long-term commitment between the two dioceses.

The dioceses have not shied away from discussing the possibility of someday merging, a canonically governed process known as “juncture,” though that is just one of many options on the table as they consider the future of The Episcopal Church in Michigan. The state encompasses four dioceses, and all four have collaborated in the past in various ways, from joint formation programs to coordinated public statements on statewide issues.

The transition underway in the Diocese of Eastern Michigan follows a spirit of innovation that dates back to its creation in 1994, when it was carved out of the Detroit-based Diocese of Michigan.

“The idea was local leadership. Grassroots efforts would rise up from the local congregation and be shared,” said Katie Forsyth, who joined the diocese as director of communications and public engagement in 2013. “Very purposefully, the diocese was designed to be a little more flexible. … We are actually well skilled to try something on and see how it goes.”

Bishop Edwin Leidel Jr. was consecrated as the diocese’s first bishop in 1996, and today he is remembered for encouraging Episcopalians in Eastern Michigan to be open to change.

“Bishop Leidel’s entrepreneurial spirit and tireless embrace of possibilities helped give shape to a diocese that blesses experimentation and gives permission to take bold steps without fear of failure,” the diocese says on its website.

Forsyth’s own career path is emblematic. In March 2018, she assumed her current role, serving both Eastern Michigan and Western Michigan as canon for networking and evangelism. The dioceses also work together on a congregational development program, youth ministries, a diversity task force, a disciplinary board and mission outreach to the Dominican Republic. 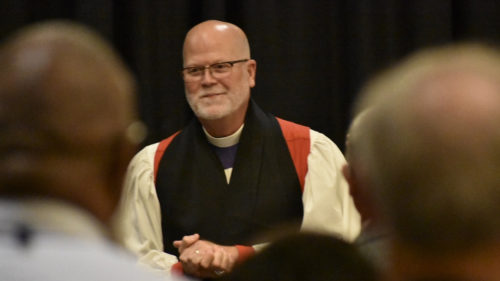 A key catalyst for the recent conversations was the resignation in June 2017 of Eastern Michigan Bishop Todd Ousley, who left to lead The Episcopal Church’s Office of Pastoral Development, a position on the presiding bishop’s staff that assists dioceses undergoing bishop transitions. In an interview with Episcopal News Service, Ousley said The Episcopal Church is working to move beyond organizational structures that date back to the 18th and 19th centuries.

“We’re getting better as a church on focusing on mission-driven priorities rather than trying to squeeze the mission into an existing structure,” he said.

General Convention underscored the importance in a 2018 resolution that called on dioceses and congregations to engage periodically in missional review, to determine “what is God calling us to be and do at this time and in this place.”

Ousley, who joined the Diocese of Eastern Michigan as canon to the ordinary in 2001, succeeded Leidel as bishop in 2007. He told ENS that, toward the end of his tenure, he sensed that Eastern Michigan and Western Michigan were ripe for a more substantive partnership, something he began discussing with Hougland.

“Both Eastern and Western were going to come to a point where they were facing questions of viability,” Ousley said. 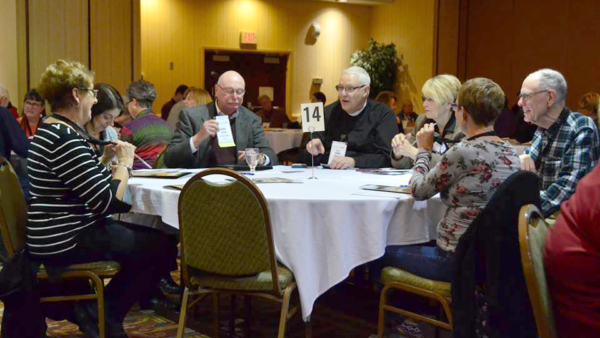 Envisioning the future of The Episcopal Church in Michigan

Those questions partly focused on regional demographics, Ousley said. The eastern half of Michigan was losing population – Flint, the diocese’s largest city, dropped from 125,000 residents in the 2000 census to about 102,000 in 2010 – and the statewide population has stagnated at about 10 million. Furthermore, Eastern Michigan mirrored churchwide declines in Sunday attendance, with baptized members down nearly 40 percent from 2007 to 2017.

Diocesan leaders also recognized that Eastern Michigan, based in Saginaw, and Western Michigan, based in the Grand Rapids area, had much in common theologically and culturally, with congregations spread across rural communities, summer resort areas and smaller cities. By contrast, the Diocese of Michigan in the southeast corner of the state includes more large cities and suburbs, including Detroit, the capital of Lansing and the college town of Ann Arbor. The Diocese of Northern Michigan encompasses the state’s sparsely populated Upper Peninsula and is geographically separated from the rest of the state by Lake Michigan and Lake Huron.

The Rev. Dan Scheid had served in the Diocese of Western Michigan before moving to Eastern Michigan to become rector of St. Paul’s Episcopal Church in Flint in 2015. Back then, he recalls Ousley at a clergy retreat talking about tough decisions ahead and the best use of Episcopal resources in the state.

“He had made it clear that certainly the bishops of the state had been in conversation about what the church in Michigan would look like,” said Scheid, who also serves as president of Eastern Michigan’s Standing Committee.

When Ousley left in 2017, rather than immediately launch a search for a new bishop diocesan, Eastern Michigan voted in October 2017 to elect Bishop Catherine Waynick as bishop provisional for at least a year. Waynick had retired in April of that year as bishop of Indianapolis.

“We saw that as a time to do some discernment,” Scheid told ENS, and early on, Eastern Michigan leaders invited Hougland and others from the Diocese of Western Michigan to be part of those conversations.

That process picked up steam in early 2018 when Eastern Michigan held five gatherings around the diocese from January to March to hear what Episcopalians thought about the diocese’s strengths, needs and outlook for the future.

A follow-up meeting in May at St. Paul’s in Flint was attended by Waynick, Hougland and other leaders from both dioceses. The presentations included an outline of what Eastern Michigan had identified as its three options: start searching for Ousley’s permanent replacement, find a long-term provisional bishop or take a step closer to Western Michigan by electing Hougland as bishop provisional.

There was a “shared sense that continuing on in separate ministry without change is not a sustainable model for the future of The Episcopal Church in this place,” according to a written report from that meeting. The report also said Hougland was open to adding the role of Eastern Michigan’s bishop provisional “should a process for deepened relationship be explored.”

“As a bishop in the church, it’s my duty and, I believe, my calling to seek ways to bring people together, and so this seems to be a natural process that makes perfect sense,” Hougland said months later in a video to his diocese identifying the options considered by Eastern Michigan.

A similar process underway hundreds of miles to the east was providing a potential model for Michigan Episcopalians.

After Western New York Bishop William Franklin announced in April 2017 that he intended to retire, his diocese began a discernment process that led to the decision to collaborate and experiment with the Diocese of Northwestern Pennsylvania, giving both dioceses time to try new approaches before figuring out what might come next. The two dioceses carefully avoided talk of possibly merging someday, focusing instead on their short-term work together.

Eastern Michigan’s third option was similar to the arrangement between Western New York and Northwestern Pennsylvania. “We’ve pointed them out as kind of the most direct reflection of the work that we’re considering,” Forsyth told ENS.

Northwestern Pennsylvania’s Rowe traveled to the Diocese of Eastern Michigan to offer his insight into the process at a gathering hosted by St. John’s Episcopal Church in Midland, Michigan, on Sept. 16, 2018.

The next month, Western New York elected Rowe as its bishop provisional for five years.

Eastern Michigan took its own definitive step forward last October. At its convention that month, a majority threw its support behind the diocese’s third option and voted to officially invite Hougland to be considered for election as the Diocese of Eastern Michigan’s bishop provisional, leading both dioceses for three to five years.

Hougland presented that proposal to his diocese at three listening sessions, two of which Scheid also attended. In April, after meeting with Western Michigan’s Standing Committee and Diocesan Council, Hougland announced in a video their unanimous approval of “the invitation to dance with our friends in Eastern Michigan.”

The plan is expected to be finalized by Eastern Michigan in October.

Scheid noted that this process has taken place during a period of relative health in both dioceses, long before either had reached a panic moment that would have forced desperate measures. And with Presiding Bishop Michael Curry encouraging all dioceses to find new ways of spreading the Jesus Movement, Scheid said Eastern Michigan reached the conclusion that the most effective way to serve that purpose, at least in the short term, wasn’t to continue devoting resources to the office of the bishop.

“It’s a tremendous gift and opportunity, as I see it, really to do some creative thinking, some experimentation, to sort of help set some possible ways forward for other dioceses in the church too which might be exploring new models,” Scheid said.