Members of Executive Council’s Joint Standing Committee on Finance June 13 sing a song they wrote to the tune of “There is a balm in Gilead.” The song, “Is there a pledge in Baltimore,” urged members to participate in The Episcopal Church’s Annual Appeal. Photo: Screenshot from video by Frank Logue

The task force that recommended the move found that, of the 18 percent contribution that Episcopal employers are canonically required to make for each clerical employee, 12.4 percent goes toward the clergy defined benefit plan. Of the remainder, 3.3 percent covers disability, death and maternity benefits; 2 percent goes to retiree medical insurance costs; and 0.3 percent is for life insurance for active clergy. Clergy are not allowed to contribute to the plan.

Council also agreed to pay for the Medicare supplement insurance premium for spouses of retired lay employees with at least 10 years of service. That move will mirror the benefit provided for clergy retirees. Currently, 51 lay employees meet that threshold and 34 of them have spouses, according to the report the task force sent to council.

The decision applies only to lay employees of the Domestic and Foreign Missionary Society; it does not pertain to diocesan or congregational lay employees. 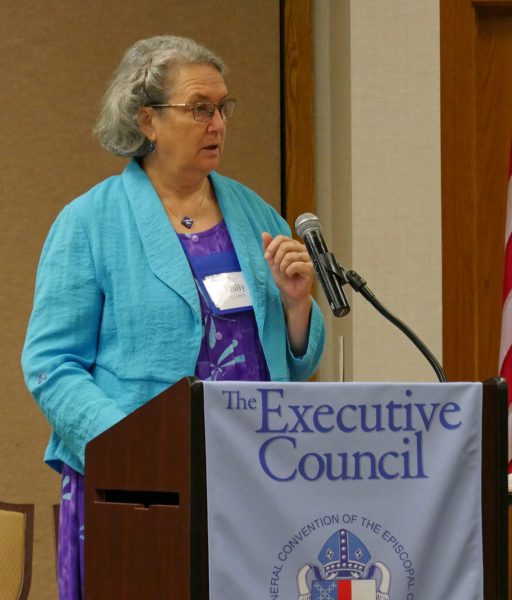 The changes are effective July 1. For a full triennium, increasing the pension contribution will cost $1 million and the Medicare supplement premium decision will cost $500,000. The task force also considered but did not recommend increasing the post-retirement death benefit for lay spouses from $10,000 to match the $50,000 provided to clergy spouses. That increase would have cost an additional $550,000.

Money to cover the remainder of this triennium’s payment will be drawn from a $2.6 million fund in the DFMS’s short-term reserves designated for lay employee benefit-related expenses. The $1.5 million plus any inflation expense will need to be built into subsequent triennial budgets.

The task force told council in its report that, while “benefit equivalence is unlikely to be achieved between a defined benefit (clergy) plan and a defined contribution (lay) plan,” it decided to focus on making pension contributions more equal. The Church Pension Fund board told General Convention in 2018 that most Episcopal Church employers have chosen to enroll their eligible lay employees in its Lay Defined Contribution Plan; only about 11.6 percent of eligible lay employees participate in the Lay Defined Benefit Plan.

“This is a good example for dioceses because while it does not mandate it for the dioceses, lots of dioceses will say, ‘Oh, well, the [DFMS] is only doing x percent, we only need to do that,’” said council member Diane Pollard. “This could be an incentive to places that are doing five percent.”

While no one spoke against the proposal during council’s plenary session on June 13, some members of council’s Joint Standing Committee on Finance expressed concern about the impact of such a model during the committee’s discussion earlier in the meeting.

“If this is to be a model that we hope to perpetuate on the rest of the church, this is going to kill parishes,” warned the Rev. Mally Lloyd, council member from the Diocese of Massachusetts who chairs the committee and joined the group in unanimously agreeing to forward the proposal to the full council.

The Rev. Anne E. Kitch of the Diocese of Newark told her committee colleagues that if they want to support parishes they must acknowledge that the discussion is about parity and privilege, and “the way to fix it would be to lower what clergy get.”

Lloyd also warned that when the 2022-2024 budget is presented to the next meeting of General Convention in July 2021, the $1.5 million decision “will have major impact on program or staffing, or something.” Convention might have to require dioceses to pay more money into the churchwide budget, she said. On the other hand, she added, the market might go up, which would increase the church’s income.

Diocese of North Carolina Bishop Suffragan Anne Hodges-Copple said the pension decision is consistent with the values of equity implicit in the Jesus Movement. Presiding Bishop Michael Curry said during the committee discussion that he hoped the next budget process could remember the lens that Hodges-Copple described.

Also on the agenda of the final plenary session, Executive Council:

* heard from the Rev. Stephanie Spellers, canon to the presiding bishop for evangelism, reconciliation and stewardship of creation, that council members will soon be the first Episcopal Church leaders to receive a survey and thus engage in a new effort aimed at “speaking the truth about our church and face.” The online survey will look at the racial, cultural and ethnic makeup of various leadership bodies in The Episcopal Church. Council members will be asked about their racial and cultural identities, as well as where they saw race playing a factor in their election and in their time on the council, she said.

The survey will eventually go the members of the House of Bishops and the House of Deputies, as well as cathedral deans and the leadership in three dioceses in each of the church’s nine provinces. The data collection, along with interviews with selected people who have answered the survey, will take a year, Spellers said.

“By the time we get to the next General Convention, we will truly have a comprehensive picture of race in our church, where we have fallen short, where we have moved forward,” she said.

* passed two resolutions setting vaccination standards for Episcopal institutions and events, and “recognizing no claim of theological or religious exemption from vaccination” for church members while reiterating the spirit of General Convention policies that “Episcopalians should seek the counsel of experienced medical professionals, scientific research, and epidemiological evidence” when making decisions about vaccinations.

A summary of all resolutions council passed at this meeting is here.

The Executive Council carries out the programs and policies adopted by the General Convention, according to Canon I.4 (1). The council comprises 38 members – 20 (four bishops, four priests or deacons and 12 laypeople) elected by General Convention and 18 (one clergy and one lay) by the nine provincial synods for six-year terms – plus the presiding bishop and the president of the House of Deputies. In addition, the vice president of the House of Deputies, secretary, chief operating officer, treasurer and chief financial officer have a seat and voice but no vote.

Complete ENS coverage of the meeting is here.