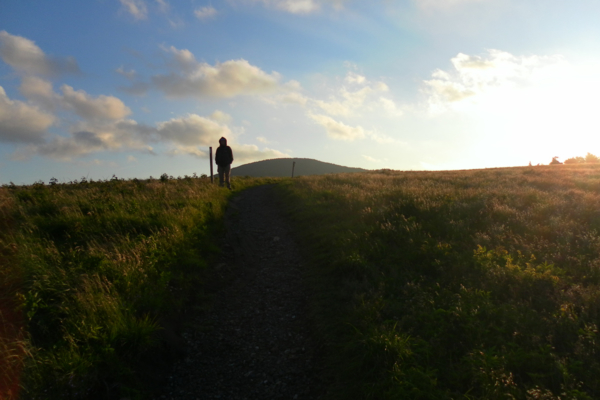 [Episcopal News Service] The United States may lack a pilgrimage path quite like Spain’s centuries-old Camino de Santiago, which draws hundreds of thousands of foot-powered Christian pilgrims each year, but American hikers have a worthy alternative: the Appalachian Trail. 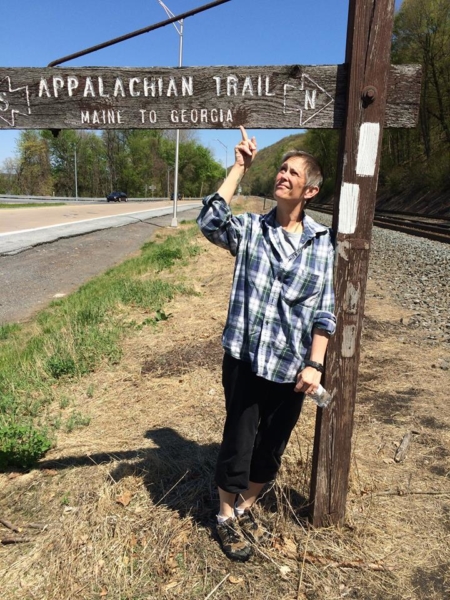 About 3,000 people attempt to hike the trail’s full length each year. The Rev. Dan Morrow is not one of them. Instead, Morrow and his wife set out on a day hike in spring 2018 on the part of the trail that passes a couple miles from their home in Mechanicsburg, Pennsylvania, and by the time they returned, Morrow had found inspiration.

“I thought, how cool would it be to have a pilgrimage on the trail, like the Camino in Spain?” Morrow, the Diocese of Central Pennsylvania’s canon for congregational life and mission, told Episcopal News Service. “If we truly believe that God is active here in our communities, then Central Pennsylvania is holy ground, too.”

That inspiration was the spark behind Appalachian Camino, a weeklong group hike organized by the Diocese of Central Pennsylvania that will cover most of the trail segment through the diocese starting June 23. Participants will begin and end each day in worship, with churches near the route offering the hikers a place to camp for the night. 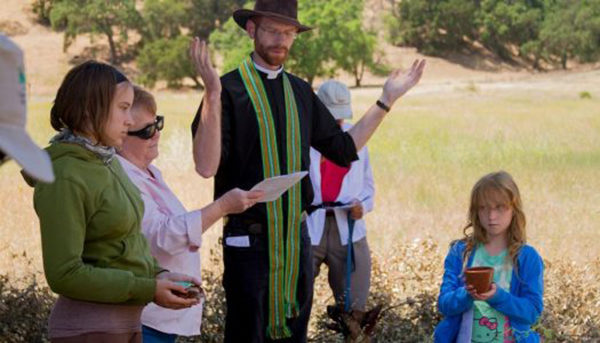 The Rev. Justin Cannon presides at Holy Eucharist during one of the Holy Hikes outings of the original chapter in the San Francisco area. Photo: Holy Hikes

Morrow and other organizers of Appalachian Camino are following in the footsteps of nature-minded Episcopalians who have launched numerous outdoor pilgrimages and ministries in recent years. Holy Hikes, which originated in California’s San Francisco Bay area in 2010, has grown to more than a dozen chapters across the country that organize day hikes incorporating Holy Eucharist and creation care themes. And in New England, the region’s Episcopal dioceses have collaborated on an annual paddling pilgrimage called River of Life that, since 2017, has turned the Connecticut River into a place of prayerful meditation and communion.

The River of Life pilgrimage influenced the planning for Appalachian Camino. Central Pennsylvania Bishop Audrey Scanlan, before becoming bishop in 2015, had served in the Diocese of Connecticut, and after welcoming Morrow’s idea for a hike, she conferred with Connecticut Bishop Ian Douglas about how he and his fellow paddlers approached their journey. The Connecticut River pilgrims, for example, typically start their mornings in silence to open their senses to the world around them. 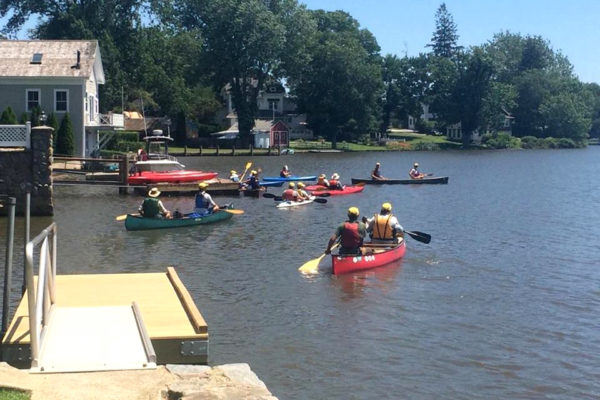 Pilgrims launch from a dock in Essex, Connecticut, on July 9, 2017, the final day of the River of Life pilgrimage. Photo: Kairos Earth, via Facebook

“I’ve wondered what that would be like for us to begin our hike each morning with some great silence of our own,” Scanlan said in an interview with ENS.

One of Scanlan’s goals as bishop has been to bring her diocesan staff members into the diocese’s communities so they can foster deeper relationships with Episcopalians on their home turf. She saw Morrow’s idea as a unique opportunity to further that mission.

“It’s connections between ourselves, among people of our diocese, as we continue to try to build unity across the diocese,” Scanlan said of Appalachian Camino’s purpose. “It’s connections with the Earth and initiatives around creation care, and actually being in creation and spending time appreciating and walking through God’s place. It is gorgeous here.

“The other piece is getting out and being among other fellow pilgrims who are hiking and being the church in the world.”

Those “fellow pilgrims” are not just the 25 or so Episcopalians who signed up for Appalachian Camino. “Thru-hikers” who started in Georgia and plan to go all the way to Maine should be passing through Pennsylvania this month, Scanlan said, offering the possibility for trailside fellowship.

Scanlan isn’t the only Episcopal bishop with an eye for ministry and mission possibilities on the Appalachian Trail. Western Massachusetts Bishop Douglas Fisher leads a diocese that includes the trail’s full 91-mile Massachusetts segment, and when the Rev. Erik Karas took over as rector of Christ Trinity Church in Sheffield two years ago, Fisher suggested he consider a trail-based ministry.

Christ Trinity Church, a joint Episcopal and Lutheran congregation, is just a few miles from a point where the Appalachian Trail crosses a sunny field. Karas hatched a plan to create “a corner of kindness” in the field for passing hikers. 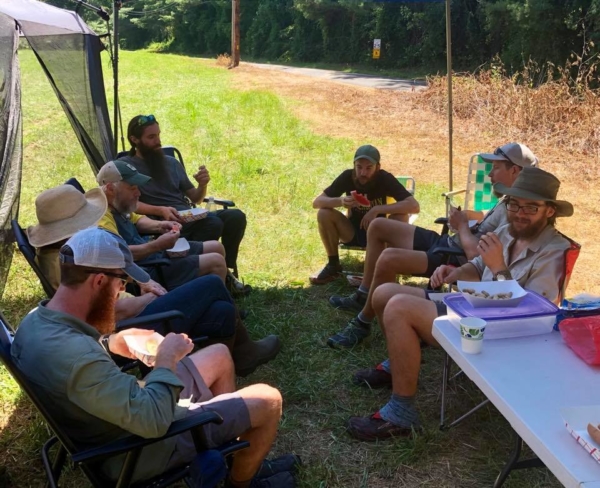 Hikers on the Appalachian Trail pause for a break at the rest stop maintained last July by Christ Trinity Church in Sheffield, Massachusetts. Photo: Erik Karas

His congregation bought shade canopies, chairs with backs, a grill and a table and stocked the makeshift oasis with high-calorie snacks and lunches. Church volunteers staffed the rest stop midday on Wednesdays and Saturdays last July, when the thru-hikers were most likely to pass by.

“The hikers call it trail magic, and the people who give that kind of hospitality they call angels,” Karas said. His parishioners benefited from the experience, too.

“It’s an opportunity for the people in my church to practice hospitality and kindness to strangers,” he said. “It sort of embodies that gospel, that grace moment, unexpected and abundant.”

They are planning to bring the ministry back to the Appalachian Trail this July and to expand the number of days if more churches sign on to help.

Episcopalians in Central Pennsylvania have a long history of trail magic along their stretch of the Appalachian Trail. Bishop James Henry Darlington, the diocese’s first bishop in the early 20th century, is remembered as an early booster for conservation efforts and trail development in the region. Darlington Shelter, named in his honor, is one of the landmarks the Appalachian Camino hikers will pass.

The Appalachian Trail covers 229 miles in Pennsylvania, though only part of that segment passes through the Diocese of Central Pennsylvania. The group hike will kick off June 23 near the Maryland state line at Calvary Episcopal Chapel in Beartown, Pennsylvania, and it is scheduled to conclude on June 28 with an end-of-hike celebration at St. Andrew’s in the Valley Episcopal Church in Harrisburg.

About 15 people have signed up to hike the full six days, Morrow said. Others will join the hike for a day at a time. A support van will shadow the group along the route, lightening the hikers’ load while they’re on the trail and transporting them to and from the trailhead at the start and end of each day.

“It’s not going to be overly programmed, but there will be some opportunities for reflection and silence and, I’m sure, some singing as well,” he said.

This stretch of the Appalachian Trail is known as “Rocksylvania” because it crosses some rough terrain, though much of it remains relatively flat, Morrow said. A mix of clergy and laity, as well as some young children, have signed up. The group will hike 13 to 20 miles a day, with options for shorter day hikes.

Each evening, the group will leave the trail and join a local congregation for dinner, worship and fellowship – and, in some cases, access to showers. These overnight stops will offer additional opportunities to make connections with Episcopalians in communities near the trail.

“Most of the churches along the route are smaller rural churches,” Morrow said. “We’re hoping that they just want to come out and hang out with us.”

The churches will have space, such as in parish halls, for the hikers to roll out their sleeping bags for the night, though certain hikers might prefer the church lawn.

“Some of us, like me – I would rather put my tent up and sleep outside,” Scanlan said.