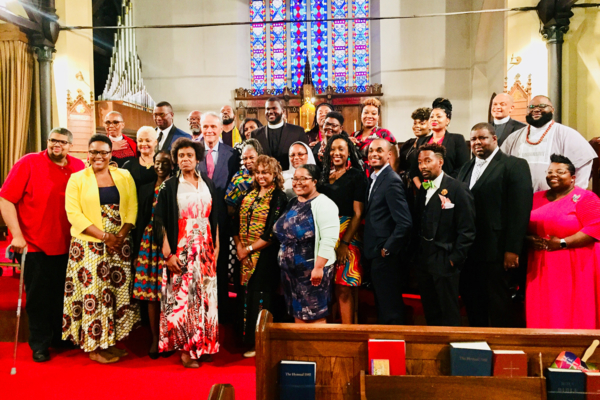 Participants and organizers of a service marking 400 years since enslaved Africans arrived in North America post for a photo at St. Luke’s Episcopal Church in Washington, D.C. Photo: Bread for the World

The event at St. Luke’s Episcopal Church, one of seven participating capital-area churches that were founded by slaves or former slaves, was led by Bread for the World’s Pan-African Young Adult Network, and it kicked off this week’s annual Bread for the World Advocacy Summit, a large ecumenical gathering of anti-hunger advocates.

The kickoff service at St. Luke’s was framed as a time both of lament for past injustices against African Americans and of hope for a better future, Bread for the World’s Angelique Walker-Smith told Episcopal News Service. She said the commemoration also was a fitting start to this week’s advocacy on Capitol Hill on issues related to food.

“We’re bringing historic roots and a historic lens to our legislative agenda,” Walker-Smith said. Four hundred years ago, “people of African descent were basically fed the crumbs off the table.”

The calendar this year is filled with services and events marking the first transatlantic voyage of Africans in 1619 to the land that would become the United States, and The Episcopal Church is in the middle of planning its own commemorations. The church is coordinating with the Diocese of Southern Virginia, which includes Jamestown.

“Staff of the presiding bishop’s office are co-laboring with the people and staff of the Episcopal Diocese of Southern Virginia to plan a meaningful commemoration of the arrival of enslaved Africans to Jamestown,” the Rev. Charles Wynder Jr., staff officer for social justice and engagement, said by email. “The commemoration will afford The Episcopal Church a space, time and place to tell the truth and grapple deeply with the implications of its role in the transatlantic and domestic slave trade in North America.

“It will be a significant offering to the church and the world alongside numerous ecumenical, regional and national commemorations.”

Racial reconciliation was identified by The Episcopal Church’s General Convention in 2015 as one of three priorities for the 2016-18 triennium and beyond, along with evangelism and care of creation. Resolutions dating back decades have helped guide the church as it responds to racism and atones for its own complicity in racial injustice and support for racist systems.

A 2006 resolution specifically apologized for the church’s complicity, acknowledging that “The Episcopal Church lent the institution of slavery its support and justification based on Scripture.” Three years later, General Convention voted to encourage each diocese to research the church’s role in enabling or resisting slavery and segregation, as well as “the economic benefits derived by The Episcopal Church from the transatlantic slave trade and the institution of slavery.”

St. Mark’s Episcopal Church in Washington is serving as home base for much of Bread for the World’s two-day Advocacy Summit. The congregation, near Capitol Hill, will host a breakfast and worship service June 11 before participants leave for their rounds at Senate and House office buildings to meet with lawmakers and their staffs in support of legislation that would prioritize global nutrition efforts.

Setting the stage for those meetings, the sanctuary at St. Luke’s was filled with song and prayer on June 9 as a modest crowd gathered for a service based on a yearlong devotional that Bread for the World developed to commemorate the quadricentennial of Africans arriving in North America.

Among the highlights was a rousing rendition of “Lift Every Voice and Sing,” a hymn penned by J. Rosamond Johnson and James Weldon Johnson in 1900 for Abraham Lincoln’s birthday and now known as the black national anthem.