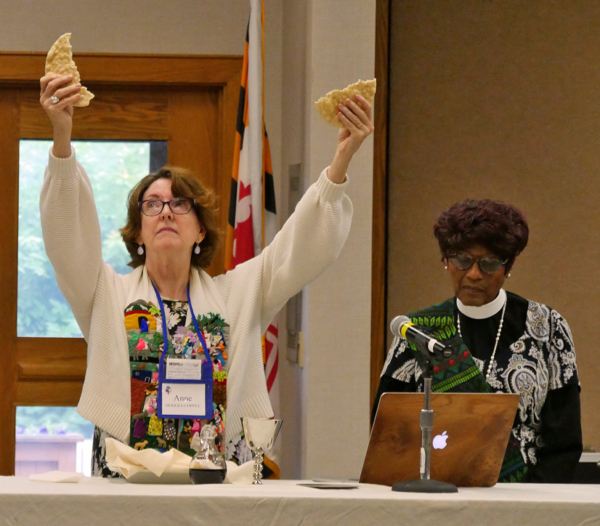 [Episcopal News Service – Linthicum Heights, Maryland] The Executive Council is starting to lead The Episcopal Church toward the future using what is currently happening in the church and in the world, according to a recently completed mutual ministry review.

General Convention in 2015 called (via Resolution A004) for a cross section of council members to do such reviews on a regular basis. The reviews are not meant to be performance evaluations. Instead, they are designed for groups to reflect on their ministry together. A group of 12 council members, including the officers and the six people who formed a transitional executive committee of council between the 2015-2018 triennium and the current 2019-2021 triennium participated in the reviews in late 2016 and 2018.

The reviews are aimed at “looking at the present from the standpoint of the future,” said Matthew Sheep, who teaches management, organizational behavior and leadership at Illinois State University. Sheep, who facilitated both reviews, told the council during the opening session of its June 10-13 meeting here that the participants in the most recent review, which began in November 2018, are open to considering a number of “possible futures.”

The 2018 review found that the participants feel there is a “rebuilt trust” among council members, officers and the churchwide staff. All have a sense that people assume the best intentions on the part of others, rather than assuming that others are only looking out for their own interests. They also appreciate, according to Sheep, a clarity and strength of the organization’s mission and vision, impactful leadership and council’s decision in October to reduce and restructure its committees. 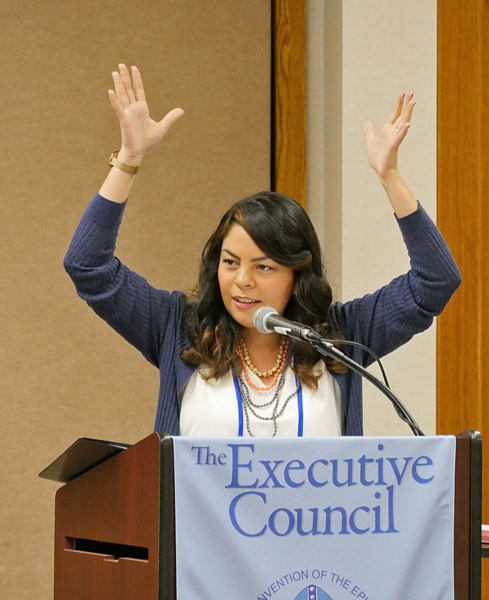 The council has an “improved organizational climate,” Sheep said.

The participants are also concerned about sustaining those improvements, regardless of any changes that might happen in leadership. For instance, the Rev. Gay Clark Jennings, House of Deputies president, will complete her third and final term at the end of the 2021 meeting of General Convention and leave the council.

Among the areas that need improvement, the review said, are the financial cost of governance, further clarification of roles and responsibilities, methods to bring the Way of Love to all levels of the church, and strategies for dealing with tensions as they arise. Sheep encouraged the council’s willingness to look at “possible futures,” envisioning what it might look like to improve these areas “and where it might lead.”

Earlier in the meeting, Presiding Bishop Michael Curry told the council during his opening remarks that the relationship between the council and the churchwide staff is “growing and developing in healthy and positive ways.”

At a June 3-5 gathering, the staff spent time considering how each person’s work advances the church’s priorities of evangelism, reconciliation and care of creation. Sometimes, that work is obvious, Curry said, but sometimes the relationship of work such as making sure the boiler is working and the checks are written on time to those priorities is not so clear.

Evoking Ephesians 4:11-12, Curry said his job, as well as that of both the staff and the council, is to “equip the church to be the Jesus Movement in the world, witnessing and walking the Way of Love.”

In @PB_Curry's opening remarks to #excoun, he gives a shoutout to the staff of @iamepiscopalian. They convened last week for their regular in-house meeting. He described them as remarkable and hardworking as well as lots of other accolades.

Jennings agreed with Curry’s idea of looking at staff and council effectiveness by how they equip the church for mission. And, she added a caution. In her opening remarks, she noted that many people want to say that the world is in a “post-institutional age.”

Even in The Episcopal Church, she said, people “seek to flatten structures and decentralize power.”

“Every three years, we go to General Convention to debate the budget, and we hear about how we should be funding mission, not governance and institutional structures, as though the mission happens by magic,” Jennings said.

If the church wants to be the Jesus Movement, “we have to focus on how we are actually going to move,” she said. “We have to remember that governance is mission, just the same as programs that more commonly get defined that way. General Convention’s commitments to creation care and to racial reconciliation and to evangelism would mean very little without the governing structures of the church that help make them happen.”

If we are going to be the Jesus Movement, and we do, we need to figure out how to move. Our work as Executive Council makes mission happen. President of the House of Deputies Gay Jennings #excoun @gaycjen pic.twitter.com/MjBkvext6i

Also during the meeting’s first day, the council

* heard a report from Treasurer Kurt Barnes that showed the 2019 part of the church’s 2019-2021 budget is on track. Barnes also noted that the Episcopal Church Center in New York is fully leased. The two newest tenants are a True Value Hardware store, which has taken over the former bookstore space on the street level, and a physical therapy practice.

Barnes said the first of three mailings soliciting donations to the church’s Annual Appeal from 38,000 constituents has raised $90,000 towards the $250,000 goal. In addition, the church’s effort to raise money to provide future retirement benefits for current and retired clergy in the Episcopal Church of Cuba has raised $730,000 through the end of May. Additional unconfirmed pledges could take the total over the $800,000 goal, he said.

* spent time with Ursuline Bankhead, a New York psychologist who led the members in implicit bias awareness training. Implicit bias, Bankhead explained, is an automatic preference for certain groups over others. It operates below the consciousness and is culture-bound, pervasive, evoked by group membership and taught by parents and other elders. Implicit bias is normal but also malleable, she added. “We can change it. This is the beauty of bias; it is not stuck,” Bankhead said.

Curry had said during his opening remarks that racial reconciliation in the United States is “the gateway to all the ways we are broken and fragmented and separated from each other, so it’s the entrance not the end.”

* learned that the Rev. Jabriel Ballentine from the Diocese of Central Florida had resigned his seat on Executive Council. The council will elect a person to serve the remainder of his term, which runs through General Convention in 2021. The Rev. Michael Barlowe, the church’s executive officer, told the council that its executive committee will develop a list of nominees. He said he and others were considering the propriety of council to hold a special electronic meeting for the election so that the person could begin serving at the next meeting in October. Information on the solicitation for nominations will be released soon.

Council will spend most of June 11 and 12 meeting in its four committees. On June 13, the chairs of those committees will each report to the full body, proposing resolutions for the council to consider.

The Executive Council carries out the programs and policies adopted by the General Convention, according to Canon I.4 (1). The council comprises 38 members – 20 (four bishops, four priests or deacons and 12 laypeople) elected by General Convention and 18 (one clergy and one lay) by the nine provincial synods for six-year terms – plus the presiding bishop and the president of the House of Deputies. In addition, the vice president of the House of Deputies, secretary, chief operating officer, treasurer and chief financial officer have seat and voice but no vote.

The June 10-13 meeting is taking place at the Maritime Institute Conference Center outside Baltimore.