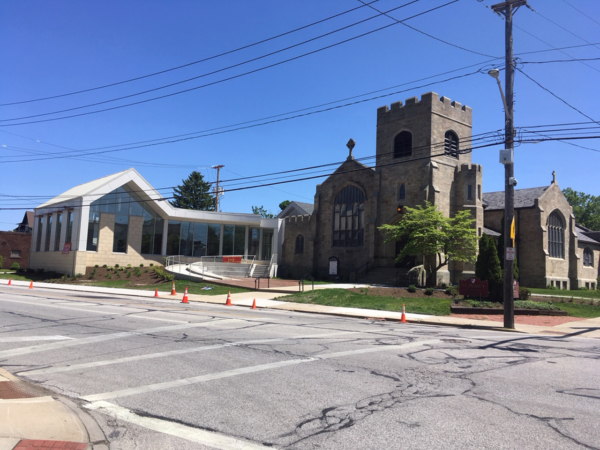 [Episcopal News Service] If you’d walked by the corner of Detroit Avenue and West Clifton Boulevard in downtown Lakewood, Ohio, a year ago, you would have seen an impressive but imposing neo-Gothic church attached to a drab brick building with air conditioners sprouting from rusted window frames. It might’ve been hard to tell whether anything was happening at St. Peter’s Episcopal Church, with its fortress-like stone walls and dark wooden doors. Though its stained-glass windows are dazzling from the inside, you would have seen nothing but opaque black glass.

Walk past the same corner in this cheerful Cleveland suburb today and you’ll see the same church, but the adjoining building has been replaced by a modern addition that curves out toward the street. Through its floor-to-ceiling glass windows, you might see a choir rehearsal, a Bible study, a piano recital, or even a yoga class. As striking as the new building is, your eye would be drawn to the people inside.

That transformation is the basis for a new mission at St. Peter’s. What started as a project to rebuild the aging parish hall became an opportunity to make the parish more accessible and invite the larger community in. Rather than limiting the new building to church-related usage and income-generating space rentals, St. Peter’s is inviting its neighbors to approach the building with their own ideas – and on their own terms.

“The whole building is designed to invite people in,” said the Rev. Keith Owen II, rector of St. Peter’s. “And we’re basically saying to the community, ‘Come and look at this building and help us imagine what we can do in here.’”

The $3.5 million project originated a decade ago, when parish leaders realized that the 1950s parish hall – which housed the parish offices, several classrooms and the church’s long-running day care center – had reached the end of its useful life and was beyond repair.

And the building was a nightmare for elderly or handicapped parishioners.

“If you were mobility-impaired, it was flat-out impossible for you to meet with the rector in his office. You just couldn’t get there. There were eight or nine different levels” between the church and the parish hall, said parishioner Fred Purdy.

“So, for all those reasons, we decided we needed to do a complete tear-down and build a new one,” Owen said.

The new building solves the access problems with an elevator and a hallway that gently slopes from the entrance up to the narthex, where it connects to the church without any steps. But it presented an opportunity to make the parish more accessible in other ways, too. As beautiful as the 1920s church building is, you can’t see in or out. The old parish hall suffered from similar visibility issues.

“The building could be full of people and, from the outside, you’d never know it,” said Owen.

“We wanted to make sure the community could see in,” echoed parishioner Lorna Jordan. “Nobody knows what’s going on inside.”

The architectural solution, of course, was glass – so much glass that Owen is convening a “Squeegee Squad” of parish volunteers to clean it all on a regular basis. From the parish offices to the lounge to the day care center, the building is flooded with natural light. A courtyard with a small prayer garden sits in the center of the new church complex. But the focal point of the project is the section closest to the street: a multipurpose space called the Chapel of the Confession of St. Peter.

To highlight its flexibility, the chapel is decidedly minimalist, with plain white walls, large windows and no fixed pews. There will be one major decorative element, though: a specially commissioned icon of the biblical scene the chapel is named for, in which Jesus asks his apostles who they believe he is, and Peter replies that he is the son of God.

The chapel will be used for smaller services, choir practices and parish group meetings, but it also represents a new outreach opportunity for the church. Along with the other mission projects that currently operate on the property – such as the affordable day care center and a free meal program – this multipurpose space is intended as a gift to the community, an open invitation to the people of Lakewood to decide how they want to use it.

“Our function as a parish truly resides in the community at large,” said Purdy. “It’s our intention that it be utilized as the community finds to its benefit.”

“We’re kind of putting our feelers out in the community,” said Jordan. The parish will celebrate the grand opening of the new building on Sunday, June 9, with Lakewood’s mayor and the bishop of Ohio in attendance, and Jordan hopes that will encourage people to reach out with their ideas for how to use the space.

Potential uses suggested by Owen and parishioners include concerts, crafting, tai chi, dance classes, town hall meetings, lectures, meals, art shows, and an emergency homeless shelter on dangerously cold winter nights. Currently, there are no plans to charge rental fees for nonprofit events. Owen said the parish has offered the space to Beck Center for the Arts – a performing arts theater two blocks away – as it undergoes a building project of its own.

Owen explained, “We basically said to them, ‘Here’s this beautiful, acoustically alive room, and you’re getting ready to tear your building down and rebuild it, so use it! Here it is! Use it!’ And they were kind of like, ‘What? Really? For free?’ And we said, ‘Yeah, for free!’”

Whatever activities the community brings to the new space in the years to come, the project has already changed the dynamic between the parish and the surrounding neighborhood. With so much glass, it feels like the space doesn’t really have walls at all. The distinction between inside and outside – or secular and religious – seems to fade.

“Now, nothing can go on in that building that cannot be seen from outside,” Owen said. “People can see in and we see out, so there’s a kind of communication going on between the community and the congregation that never went on before.”

And if you happen to walk past at a time when there are no events in the building, there will still be something inside the new chapel that catches your eye: that one-of-a-kind icon. At five feet by four feet, it will be “unavoidably visible from the street,” said Owen, who spoke to ENS while driving back to Ohio after picking up the icon in Florida.

“[That was] something we didn’t really plan,” he said. “It just kind of happened.

– Egan Millard is a freelance reporter based in the Boston area and a member of the Episcopal Parish of St. John the Evangelist in Hingham, Massachusetts.