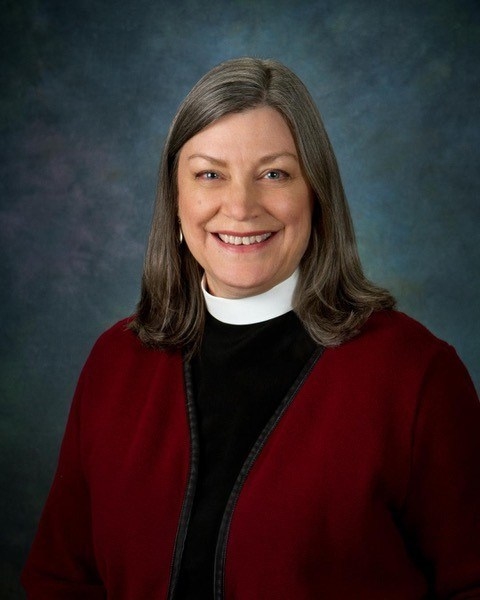 The election at St. Andrew’s Episcopal Church in Saratoga was framed within the liturgy of the Eucharist and attended by 350 people. She received the required number of votes in the third ballot of voting.

“I can hear you!” said Ashby as she appeared by video feed and was greeted with enthusiastic applause. “I am honored. I am humbled. I am very grateful that you’ve called me to become the fourth bishop of El Camino Real. I’m humbled that the Holy Spirit has moved us toward this outcome … and because I really can’t believe it!”

“There was so much more I wanted to say,’ she added, speaking about the walkabout sessions in early May. “Do you know that feeling where you wish you’d said something better? I wanted to give better answers to your questions, delve deeper into the aspirational topics you raised … and now I have that chance.”

“I’m grateful that so many people were fully engaged in the discernment process for our next bishop,” said diocesan Bishop Mary Gray-Reeves following the election. “The votes show that people recognized the gifts of all of our candidates. As a lead candidate began to emerge, everyone was willing to move with the energy as it was manifesting before us. It was exciting and beautiful to experience.”

Ashby has been the canon to the ordinary in Idaho since 2011. She was ordained in 2004 in the Diocese of Northern California, where she served as assistant rector at St. Martin’s in Davis and then rector at St. Matthew’s in Sacramento. In addition, she taught at the Church Divinity School of the Pacific in Berkeley. Before ordination Lucinda taught Spanish and music in grades 7-12 and was head of school for a private school in Sacramento. She also founded and built a school for Native Americans in Capay Valley, California.

While in the Diocese of Northern California, Ashby served as president of the Standing Committee, member of the Hispanic commission, chair of the liturgy committee, and numerous other positions. She grew up in Perú and speaks Spanish fluently.  She and her husband, Bob, currently live in Boise, Idaho; they share three grown children who reside in California with their spouses.