[Diocese of Texas] Kathryn McCrossen Ryan, former canon to the ordinary for the Diocese of Texas, was consecrated bishop suffragan in Westover Hills Church of Christ in Austin on June 1, 2019. Ryan was elected at the 170th Diocesan Council at The Woodlands Waterway Marriott on Feb. 22. 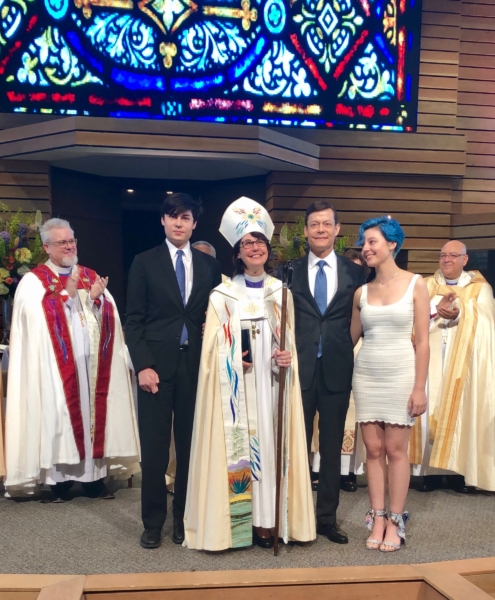 She will have oversight of congregations in the western region of the diocese, with an office in Austin. A bishop suffragan is an assisting bishop and serves under the direction of the diocesan bishop, in this case, the Rt. Rev. C. Andrew Doyle, bishop of Texas. In addition to her Episcopal visitations (and confirmations), Ryan also will serve as the chair of the Austin-area institutions: the Seminary of the Southwest, St. Stephen’s Episcopal School and El Buen Samaritano.

The Most Rev. Michael Bruce Curry, presiding bishop of The Episcopal Church was the chief consecrator, joined by Doyle, Bishop Suffragan Jeff W. Fisher, Bishop Assistant Hector Monterroso and other bishops across the country to ordain Ryan. Doyle was the preacher during the service.

Ryan, a native of Raton, New Mexico, graduated from the University of the South in Sewanee, Tennessee, and received her Master of Divinity from Seminary of the Southwest in 1992 where she currently serves on the Board of Trustees. Ryan served at All Saints, Austin, and in Mobile, Alabama, before moving to Dallas where she was called as rector of Ascension, Dallas, in 1999. She is married to Timothy Ryan, an attorney, and they have two children, Ned, 23, a freshman at Goucher College in Baltimore, and Eleanor, 17.

Ryan’s breadth of experience in four dioceses, Provincial Synod and General Convention, her participation in the national Gathering of Leaders for young clergy and nearly 15 years in a culturally diverse parish as rector stand her in good stead for the ministry of bishop suffragan.

Ryan has a history of cross-cultural ministry with which she hopes to enhance the diversity within the clergy of the Diocese of Texas.