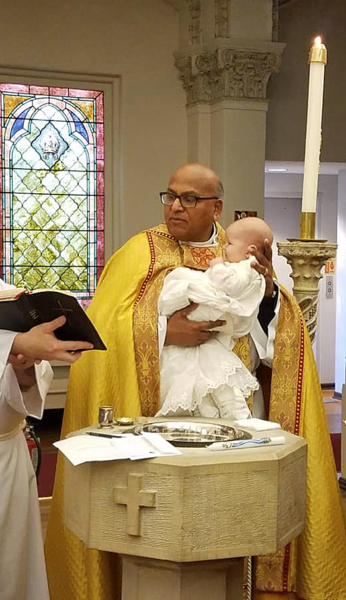 [Episcopal News Service] The Episcopal Church is paying renewed attention to Sudanese Episcopalians in two ways, one conventional and one unique in the Anglican Communion.

The Task Force on Dialogue with South Sudanese Anglican Diaspora, created by General Convention in 2018 (via Resolution D088), is the conventional way, working to “establish an official conversation for the purpose of developing a statement of understanding of the relationship with the South Sudanese American Anglican diaspora living in this country and The Episcopal Church.”

The unconventional approach will begin June 2 when the Very Rev. Patrick Augustine retires as the rector of Christ Episcopal Church in La Crosse, Wisconsin, and a week later becomes an assistant bishop in the Diocese of Bor, part of the Anglican Communion Province of the Episcopal Church of South Sudan.

Augustine will divide his time between Bor and the United States. In a March letter, the Most Rev. Ruben Akurdid Ngong, archbishop of Jonglei and bishop of Bor, wrote that Augustine will be “our voice to represent us in North America and in the Anglican Communion … to seek help in the continuing work of peace and resources for development to empower our people to live in harmony” after years of civil war.

In the past, the assignment of a bishop from one province of the communion to function in another province has been met with skepticism or outright objection. In the 2000s, so-called “cross-border interventions” involved bishops from conservative Anglican provinces and dioceses entering other provinces with the goal of ministering to those who objected to their church’s theological stance on the roles of LGBTQ people in those churches. In 2004, the communion imposed a moratorium on such interventions while also banning same-gender relationship blessings and the ordination and consecration of gay and lesbian people to the episcopate.

Augustine and his current bishop, Diocese of Eau Claire Bishop Jay Lambert, told Episcopal News Service that word of Augustine’s appointment came last August via an unexpected letter to Augustine from Akurdid. They consulted with Presiding Bishop Michael Curry, initiating a long series of conversations, email exchanges and discernment. That months-long process ended with the presiding bishop, Lambert and Augustine concluding that Akurdid’s offer was workable and was recognition of Augustine’s nearly 30-year history of ministering with and to Sudanese Anglican leaders and their people during the decades of conflict in the African nation. 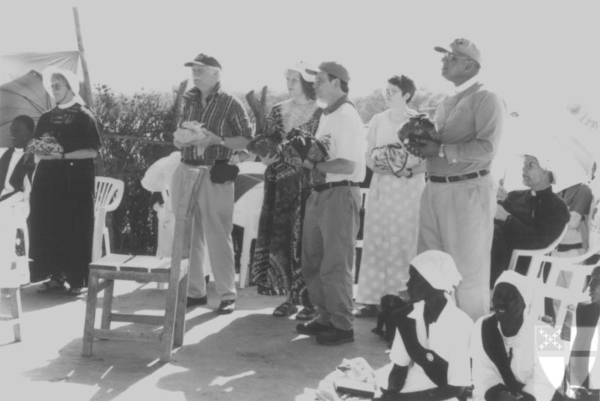 A delegation from The Episcopal Church presents gifts at a combined worship service in May 1998 at Kakuma Refugee Camp, Kenya, on the border with Sudan. The Very Rev. Patrick Augustine is at right. Photo: John Bullen/Episcopal News Service

South Sudan became the world’s newest nation in July 2011, when it seceded from the north in a referendum on independence following almost half a century of civil war. But a separate conflict erupted in December 2013 after the South Sudan president accused his former deputy of plotting a coup. The conflict quickly morphed into tribal warfare between the Dinka and the Nuer. A peace deal brokered last year by the regional Intergovernmental Authority on Development and the nation’s churches is fragile.

Augustine, 69, is a Pakistani-born cleric whose orders were transferred from the Anglican Church in Pakistan to The Episcopal Church in 1986. Having recently had two stents put in his heart, he was planning to retire when he turned 70 in 2020. Instead, he said, he decided that, with Curry’s approval, he could not refuse the call from South Sudan.

Curry recently told the House of Bishops that Augustine’s impending episcopate is not an end run, reminiscent of those interventions.

“This is not something that’s bad. It’s potentially something that’s good. We’ve never done it before, but we’ve put safeguards in place that all have agreed to,” Curry said, “for the furtherance of God’s kingdom.”

Those safeguards include requiring Augustine to have a diocesan bishop’s permission before he can enter a diocese to work with any South Sudanese Episcopalians whom the bishop has determined would benefit from Augustine’s pastoral presence, Curry wrote in a letter to Augustine.

Augustine will be expected to communicate and collaborate with the church’s Global Partnerships Office, the Rev. Charles Robertson (Curry’s canon for ministry beyond The Episcopal Church) and church-related organizations such as the American Friends of the Episcopal Church of South Sudan.

Curry also said that he will continue to talk to the South Sudanese primate about how the arrangement is working. Either one can end it if they feel people are confused about Augustine’s role.

In addition, Augustine will not be a member of The Episcopal Church House of Bishops, Curry said.

The presiding bishop told the bishops that he had talked with Archbishop Justin Badi Arama, the South Sudanese primate, and told the archbishop of Canterbury’s staff about the conversations.

Curry wrote in a letter to Akurdid that he hopes “the careful instructions” he gave to Augustine and shared with the primate “will offer the clarity needed to strengthen the bonds of faith and love that hold us together as fellow Anglican Christians.”

Relations between The Episcopal Church and Sudanese Anglicans have been rocky in the past because of General Convention’s decisions to fully include LGBTQ people in the life of The Episcopal Church. Augustine told ENS that he supports convention’s actions. “We do it in the name of compassion and justice. They disagree with us on conservative theological grounds,” he said.

“I have no other agenda” than to “be a bridge to bring reconciliation” between South Sudan and the United States, Augustine said, while also bringing the hope of the Gospel to the war-torn country whose people “have been on the run for 40 years and are now beginning to come back” to the newly independent nation.

“The agenda of Jesus is to work for the poor, to open the eyes of the blind and bring peace and comfort,” he said.

Akurdid told Augustine in outlining his appointment that the Diocese of Bor and the country of South Sudan need the world “to stand in solidarity with us to help God’s children who are suffering” because of war, internal conflicts and a lack of resources. “Our people are hungry, suffering from diseases and many are living in refugee camps in diaspora,” he wrote.

Akurdid also said he wants Augustine to help with theological education of both clergy and laity, including members of the Mothers’ Union.

“The needs are enormous” in Bor, said Augustine, who will not be paid but instead rely on his Church Pension Fund benefit that he earned serving churches in the dioceses of Virginia, Chicago and Eau Claire. He is setting up a nonprofit organization for his currently nonexistent budget. Augustine has already received some donations for his work in South Sudan, including $1,000 from Bishop William Patrick Callahan, leader of the Roman Catholic Diocese of La Crosse.

Lambert said he supports Augustine in his new ministry as long as he stays within Curry’s guardrails.

Lambert said the arrangement could be “a marvelous model” that can be a factor in “building up our church.”

Augustine will begin “to try and build bridges to work together” with the convention task force and the American Friends of the Episcopal Church in Sudan, or AFRECS, Lambert said, adding that he is helping Augustine in that effort.

“I don’t want a diffused perspective because, if they all care about each other, they can be more effective in unity,” he said.

Richard Parkins, the executive director of AFRECS, told ENS that he has not yet talked with Augustine, whom he has known since they worked together in Sudan in the late 1990s. The group has had no involvement in the formation Augustine’s new ministry. However, Parkins said, AFRECS has always worked toward the same goal of peacemaking and reconciliation.

AFRECS does that work both independently and, at times, with the help of the church’s Global Partnerships Office. In addition, Episcopal Relief & Development has worked in the area for years.

Meanwhile, earlier this year, the six-person Task Force on Dialogue with South Sudanese Anglican Diaspora was “struggling to get our hands and heads wrapped around the scope of this conversation because we don’t know where all the South Sudanese communities are,” Diocese of West Missouri Bishop Martin Field told the House of Bishops in March. He and Diocese of Iowa Bishop Alan Scarfe, who are both on the task force, asked their colleagues to fill out a survey to help them find those congregations.

Field noted that many South Sudanese immigrants are now U.S. citizens who are building families. However, “first and second generation and beyond still identify very strongly to their cultural roots in Sudan,” he said.

The Rev. Ranjit Mathews, rector of St. James Episcopal Church in New London, Connecticut, chairs the group. He told ENS that the survey uncovered nearly 40 South Sudanese faith communities spread across The Episcopal Church. In some cases, there are parishes where the majority of members are South Sudanese. Other groups are not so formally organized.

Mathews said that The Episcopal Church “could be doing a better job” of listening to South Sudanese who are in the United States to learn how the church can support them in their ministries and in their life now.

“The whole point is to help the South Sudanese realize that we want to be their church and try to meet their spiritual needs in a way that is authentic, and not something that we’re asking that they do for us but [asking] how can we be in real relationship,” said Mathews, who worked as The Episcopal Church’s Africa officer before coming to New London.