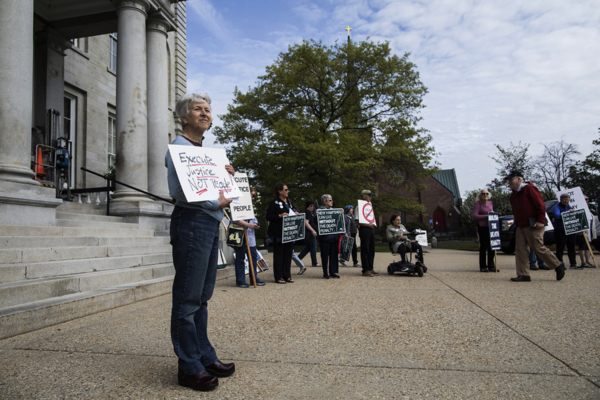 Doris Hampton of Canterbury, New Hampshire, stands in front of the New Hampshire Statehouse in Concord on May 23 to greet lawmakers ahead of the vote to override the death penalty veto by Gov. Chris Sununu. Photo: Associated Press

[Episcopal News Service] The Episcopal Church has pushed for more than 60 years to abolish the death penalty, and on May 30, New Hampshire became the latest state to align with the church and other opponents of capital punishment in favor of repeal.

The New Hampshire Senate voted 16-8 to override Gov. Chris Sununu’s veto of legislation outlawing the death penalty in the state, following an earlier successful override vote in the House. The prohibition on executions took effect immediately after the vote, making New Hampshire the 21st state to end a form of punishment that opponents have decried as state-sanctioned murder.

“Today the Legislature fulfilled its moral obligation to the people of New Hampshire and demonstrated the courage to make the right decision,” New Hampshire Bishop Rob Hirschfeld said in a written statement released after the Senate vote. Hirschfeld had submitted written testimony in favor of the legislation outlawing the death penalty in February, as did his canon for transition and community engagement, the Rev. Gail Avery.

“In New Hampshire, the diocese’s Prison Concern Committee will continue its good work to advocate for humane and just incarceration policies and practices, eliminate patterns of institutional racism, and promote effective re-entry of formerly incarcerated persons into caring communities,” Hirschfeld said in his May 30 statement.

The Rev. Jason Wells, an Episcopal priest who serves as executive director of the New Hampshire Council of Churches, issued a statement praising state legislators for voting to repeal the death penalty. All member denominations, which include The Episcopal Church, oppose capital punishment, he said.

“This action is, of course, consistent with our conviction that the life of one individual is of infinite worth and that, by grace, no one is beyond redemption,” Atha said in a written statement to Episcopal News Service.

New Hampshire was the last of the six New England states to outlaw capital punishment, though no one has been executed in New Hampshire since 1939. The state has only one prisoner on death row, Michael Addison, who was convicted of killing a police officer. The new law doesn’t apply retroactively, though people on both sides of the issue suggest it is unlikely Addison will be executed.

“It is our hope and prayer that the one inmate on New Hampshire’s death row, Michael Addison, will have his death sentence commuted,” Atha said.

Twenty-nine states still allow the death penalty for certain crimes, though four of those states’ governors have implemented a moratorium on the punishment, according to the Death Penalty Information Center. Nationwide, executions have become less common over the past two decades, down from a high of 98 executions in 1998 to a low of 20 in 2016.

Still, public opinion has for decades tilted in favor of the death penalty, with a Gallup poll from 2018 showing 56 percent of respondents supporting a death sentence for someone convicted of murder. Sununu defended his veto of the New Hampshire by saying the state had been responsible in its use of the death penalty, which he believed was justified in cases like the killing of Officer Michael Briggs by Addison. The governor was surrounded by police officers during the veto ceremony.

The Episcopal Church has never wavered in its vocal opposition of the death penalty since General Convention in 1958 passed a resolution asserting a theological basis for the belief that “the life of an individual is of infinite worth in the sight of Almighty God; and the taking of such a human life falls within the providence of Almighty God and not within the right of man.”

General Convention has reaffirmed that stance several times since then, most recently with a resolution passed in 2018. 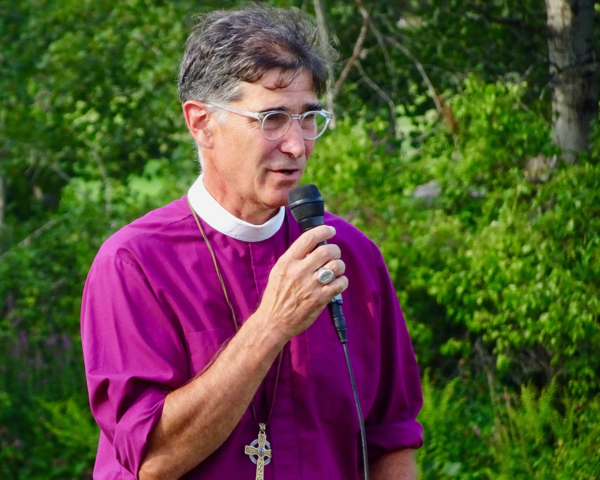 Hirschfield issued an extended pastoral letter to the diocese on the subject in 2013, the year after he was consecrated bishop, writing in favor of anti-death penalty legislation then pending in the Legislature.

“In a society that is increasingly marked by anger, hatred, revenge and violence, to hold out the possibility for repentance and forgiveness is hard – even offensive,” Hirschfeld then wrote. “Yet, for the Christian, to hold out such hope is the Way of the Cross.”

Hirschfeld, in his February 2019 testimony to the House Committee on Criminal Justice, called the death penalty “morally repugnant because it makes us all complicit in homicide,” adding that it does not effectively deter capital crime. He also criticized what he saw as “the distortion of Christian teaching” in the justifications of some capital punishment supporters.

“Such reasoning defies logic and reflects a toxic perversion of the Gospel message, the clear heart of which is that violence and hatred are not overcome, conquered or transformed by more acts of violence, but by the power of mercy,” Hirschfeld said.