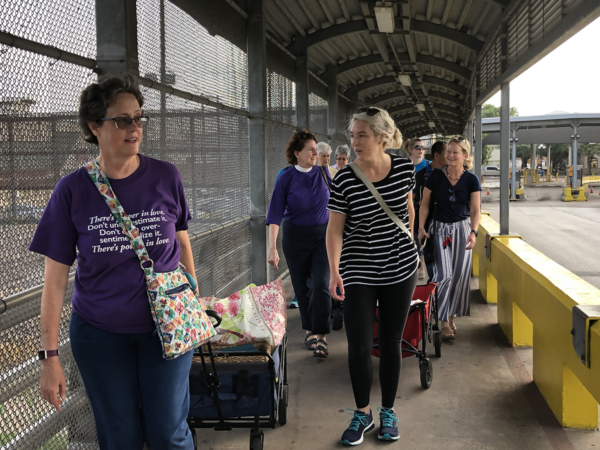 [Episcopal News Service – South Central Texas] All along the 1,954-mile U.S.-Mexico border stretching from Brownsville, Texas, to San Diego, California, Episcopalians are providing humanitarian aid to asylum-seekers and, where possible, providing support for law enforcement officers in their parishes and communities.

The “Walk in Love” border tour, organized and led by the Episcopal Diocese of West Texas highlighted some of the Episcopal ministries and humanitarian efforts in south-central Texas. The May 15-17 tour of Texas began in San Antonio and made stops along the U.S.-Mexico border in Roma, McAllen and Brownsville. (The West Texas diocese geographically covers 69,000-square-miles of mostly rural central and south Texas and includes 86 congregations.)

“The intention of the perspectives and experiences gained on the tour is to provide information and shed the light of Christ, not stoke the fires of discord, on very complicated realities experienced by people within our communities,” said West Texas Bishop David Reed, in a press release.

Reed, who stayed behind for personal reasons, met with participants at the diocesan office for prayer and a send-off on the morning of May 15. North Carolina Suffragan Bishop Anne Hodges-Copple, an Austin native, was the only bishop to make the trip, which only came together in recent weeks. 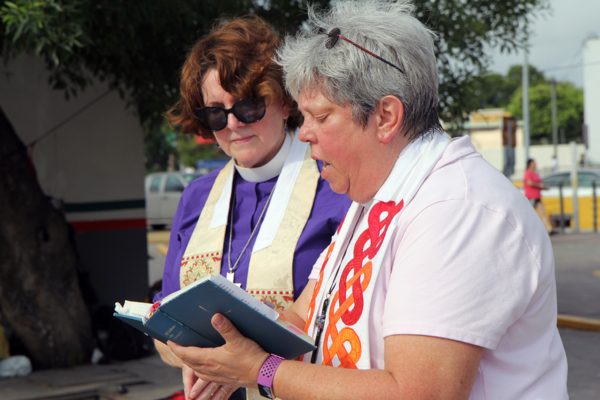 From left, North Carolina Suffragan Bishop Anne Hodges-Copple and the Rev. Laurie McKim, rector of Church of the Advent in Brownsville, Texas, preside over a Eucharist at the foot of the bridge in Matamoros, Mexico. Photo: Lynette Wilson/Episcopal News Service

Along the tour, Episcopal Church and West Texas staff and Hodges-Copple heard from a rancher, Border Patrol agents, Episcopalians and others responding to the surge in migrants and asylum-seekers at the south-central Texas border.

The decision to participate was more “emotional than intellectual; I need to go and be present,” said Hodges-Copple. “I just need to be present, not with any presuppositions, not with any agenda, just to be present and listen and see for myself and try to see what God is trying to say at this time.”

It was her Texas roots as well as North Carolina’s growing Latino immigrant population that influenced her decision to attend the border tour.

“I’ve lived in North Carolina most of my adult life, but I grew up in Texas and have family all over Texas. But as a bishop and a priest for over 30 years, the community in North Carolina that is growing numerically, growing in faith and growing our churches, are our newest neighbors who are all from Central America,” Hodges-Copple said. “These are our folks from Honduras, from El Salvador, from Guatemala, and they love going to church and they love bringing their children to church. These are the families our Episcopal churches are praying come through our doors, and that’s happening in North Carolina.

“If I’m going to also understand my people, then I need to understand some of what they’ve been through and some about where they are coming from. I’ve done trips to Honduras, I’ve been in Central America, but what is happening on the border has just felt particularly heartbreaking, confusing, painful.”

Detention centers at the U.S. border are overcapacity as a steady stream of migrants, many of them from Central America, but some from as far away as China, India, Eritrea and Angola, plus others fleeing Cuba, Venezuela and Brazil, continue to arrive. In April, U.S. Customs and Border Protection detained 109,144 migrants, the highest number since 2007, at the southwestern border.

On Thursday, May 16, following a 5 a.m. muster at the U.S. Customs and Border Patrol Station in McAllen, tour participants joined the Rev. Rod Clark, vicar of St. Peter & St. Paul in nearby Mission, to deliver breakfast tacos to about 75 law enforcement agents, including Border Patrol and Immigration and Customs Enforcement agents and U.S. Coast Guard officers.

Members of St. Peter & St. Paul have been making some 600 tacos a week, feeding migrants and asylum-seekers, and occasionally, they extend the taco ministry to law enforcement officials, like they did last week.

Images coming out of McAllen show miserable, overcrowded conditions. Border Patrol agents who spoke with border tour participants acknowledged that the situation is bad, and that they are not equipped to process the large numbers of migrants and asylum-seekers arriving at the border and effectively meet their humanitarian needs.

On May 21, less than a week after the tour’s visit to McAllen, a 16-year-old Guatemalan boy died in U.S. custody there; he was one of six children to die in U.S. custody in the last six months. The boy had the flu; his death and a flu outbreak at the immigrant detention center forced officials to suspend processing migrants temporarily at the McAllen center, the largest processing facility in the country. Full operations resumed on May 22.

“You see the photos of people on the street,” said one veteran Border Protection agent following the May 16 muster and taco breakfast. “We don’t have anywhere else to put them. We’re overflowing at the seams everywhere, and this is across the southern border.”

Moreover, tending to migrants’ humanitarian needs has caused many agents to shift their duties away from counternarcotics. Agents said the cartels have effectively moved drugs across the border by exploiting migrant caravans and trafficking people to deflect resources and attention away from curbing the illegal drug trade. Cartels are holding trafficked people in overcrowded stash houses.

“We react to them [the cartels],” said another veteran Border Patrol agent and a member of St. Peter & St. Paul, who spoke to the border tour participants during a May 16 discussion at the church.

As Border Patrol agents agreed, they don’t make the law, they enforce it; and if border tour participants learned anything, it’s that the situation is complicated along the border region, which extends 60 miles north into the United States and 20 miles south into Mexico. (On May 21, the Trump administration suggested diverting $230 million in funds from the Transportation and Security Administration to pay for operations at the border.)

“During the Diocese of West Texas Walk in Love Border Tour, I was pleased to learn from a variety of perspectives. We know that crafting policy and implementing policy is a complicated and messy process and lived realities in any community are similarly complex,” said Lacy Broemel, refugee and immigration policy analyst who works out of The Episcopal Church’s Washington, D.C.-based Office of Government Relations.

“Immigration in the United States is certainly a prime example of the complexities in policy. While there is a responsibility to confront security risks and to simultaneously uphold laws and protections for vulnerable persons, The Episcopal Church holds that immigration benefits our communities and nation as a whole,” she said. “We believe there must be a renewed effort by Congress to pass comprehensive immigration reform that would modernize our immigration system to make it just for all persons.

“Through listening to city officials, Border Patrol, and volunteers working with asylum-seekers, I was reminded of the direct impact decisions by elected officials have on the issues and people we care about. I gained a sense of renewed passion to continue to advocate for policies that put the dignity of every person at the center.”

The tour began outside the border region, in San Antonio, where the West Texas diocese has its administrative offices and where churches like St. Mark’s Episcopal and Travis Park Church in the heart of downtown have partnered with the city’s Department of Human Services through its Faith-Based Initiative.

Tour participants heard firsthand during a session at St. Mark’s about the city’s humanitarian response from Department of Human Services officials who explained the situation on the ground.

For the most part, asylum-seekers traveling in family units are boarding private buses at overcrowded immigrant detention centers closer to the border and then making transfers through San Antonio’s bus station and airport.

Travis Park Church partners with the city to shelter migrants who have received legal asylum status as they make their way to unite or reunite with family members or hosts who’ve agreed to house them through asylum process, which can take up to two years.

The Rev. Gavin Rogers, a United Methodist associate pastor, explained to the tour group that his church went from sleeping an average 50 asylum-seekers a night to 190 or more in recent months. And, he explained, the church facility continues to operate its homeless ministry.

During the tour’s last stop in Brownsville, border tour participants connected with Andrea Rudnik, a parishioner at Church of the Advent, which is part of Team Brownsville, an interfaith initiative tending to the needs of migrants and asylum-seekers on both sides of the U.S.-Mexico border.

Joining Rudnik in crossing the bridge connecting Brownsville to Matamoros, border tour participants transported breakfast to migrants living in tents next to the bridge on the Mexico side while awaiting entry into the United States.

There, following breakfast and before an impromptu Eucharist, Tatiana Hoecker, Diocese of West Texas’ world mission coordinator, spoke to an asylum-seeker from Cuba who has been making his way to the border through 13 countries since September 2018.

“The journey is so intense and it’s not the same story over and over again, but they are similar and then I think, how can it get worse? Like today, that guy who’s traveled 13 countries since September: one journey, one goal,” said Hoecker, who also referenced the untold number of people who don’t make it, who die along the way.

Alberto, the Cuban asylum-seeker, has been waiting two months at the U.S.-Mexico border. At first, he traveled alone, but then joined another group of Cubans in Guyana. From there, they traveled through the jungle, through Peru, Brazil, Colombia and Panama.

“He said that very few made it to where he is,” she said. “I don’t think he gave a number, but it was less than five people [in his group], they lost three people from their group in the jungles.

“And that story, I know it happens, but that’s not a story I’ve heard before. I heard another story recently where it was a couple that had gone through the same kind of path through the jungle and the husband cannot sleep at night because he’s envisioning the bodies that they saw.”

Episcopalians may join Partners in Welcome and also connect with Episcopal Migration Ministries to learn how they can help. To contact EMM for help connecting asylees with services through its resettlement affiliates, email emm@episcopalchurch.org.

Many of the migrants to gain asylum and enter the United States are recovering from violence and suffering trauma, which is another avenue where Episcopalians can assist.

“Episcopal Migration Ministries’ network of refugee resettlement affiliates stand ready to serve those who receive asylum. Asylees (the status given to asylum-seekers who receive asylum) are eligible to receive many of the same services that refugees who are resettled to the U.S. also receive,” said Allison Duvall, Episcopal Migration Ministries’ manager for church relations and engagement.

“Through EMM’s new Partners in Welcome program, we’re also connecting Episcopalians, congregations and ministries across the church with opportunities to connect, support, learn, and serve. We’re currently forming a working group that will develop a toolkit for congregations who want to support and walk alongside asylum-seekers,” she said. “We’re also partnering closely with colleagues from Church World Service and other organizations who are part of the Interfaith Immigration Coalition to connect asylum-seekers with assistance and support in transit and destination cities throughout the U.S.”