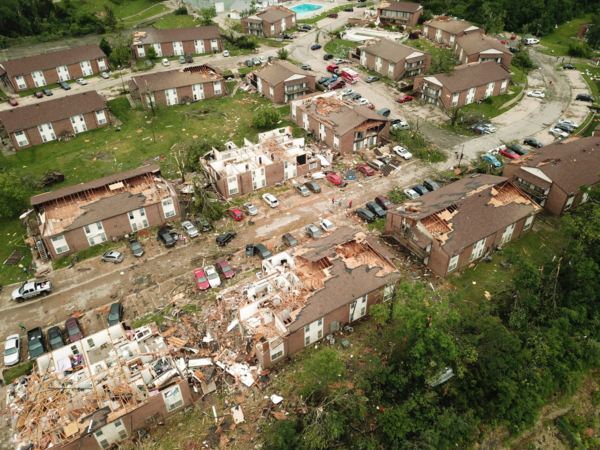 Debris from destroyed homes is shown in this aerial photo after a tornado touched down May 22 in Jefferson City, Missouri. Photo: Reuters/Drone Base

[Episcopal News Service] Tornadoes continue to rip up parts of the Midwest this week, and Episcopalians are assessing the damage to their communities as they look for ways to help their neighbors.

For the fourth straight day, destructive storms strafed the middle of the country May 23, the Associated Press reported, with most of the storms concentrated in sparsely populated panhandles of Oklahoma and Texas. The National Weather Service received reports of more than a dozen tornadoes, along with numerous reports of large hail and torrential rain, according to the AP.

Active weather is in no mood to quit anytime soon.

Watch for strong to severe storms this afternoon and evening. If out tonight, avoid any potential flooded roadways. pic.twitter.com/OKvVIlWgxv

The National Weather Service confirmed that an EF-3 storm hit Missouri’s capital, Jefferson City, on May 22. It traveled nearly 20 miles during its 20 minutes on the ground and was 1,500 feet wide at one point.

The Diocese of Missouri said May 23 that initial reports from the Rev. Ian Lasch at Grace Church in Jefferson City are that the building is intact, although there has been at least some minor damage to a door.

“We do, however, have a fair amount of debris deposited around the church and in the courtyard,” the congregation said on its Facebook page May 24, announcing a gathering for later in the day to pick up the debris. “We will have pizza for everyone who comes to help. There is a little bit of broken glass in the courtyard, so if you have them, please bring a pair of work gloves.

“We will likely have plenty of help, so work may go quickly. If we finish too soon, we can always do some further cleanup around the block and in the neighborhood.”

A few photos of the damage in Jefferson City. The Patrol is assisting @JeffCityPolice and the Cole County Sheriff's Department with efforts after last night's tornado. #mowx pic.twitter.com/z7fZhIsysm

Jefferson City’s downtown churches are hosting an afternoon service May 26 at the First Christian Church (Disciples of Christ) for “prayer and reflection focused on lifting up to God those who have been in harm’s way, the resilience of our community, the safe-keeping of our neighbors, and the future of our city as we rebuild and re-imagine our shared future.”

Members of nearby St. Mark’s Episcopal Church in Portland, Missouri, have checked in with one another, and they and the church appear to be fine, according to the diocese.

The Rev. Paul Snyder, a deacon who is the Diocese of Oklahoma’s disaster recovery coordinator, told Episcopal News Service late on May 23 that “we are in the middle of the disaster,” and residents there expect more storms to come. The diocese is a member of the Oklahoma Voluntary Organizations Active in Disaster, or VOAD, and Episcopalians serve on the spiritual care and long-term recovery committees.

VOAD set up mobile area resource centers in the small towns of Haileyville and Blue. The diocese gave out $2,500 in gift cards at the two centers to help people get personal and hygiene items, Snyder said in an emailed message.

“The main thing that most are concerned with now is the flooding,” he wrote. “Several state highways look like lakes. They are opening dams to save them, which is causing flooding downstream. The Cimarron River has eroded 20 feet of shore line and washed away two homes. There are more homes hanging over the edge.”

The small town of Webbers Falls, Oklahoma, was evacuated as two unmoored barges drifted on the Arkansas River and smashed into the nearby lock and dam.

Snyder said Tulsa, Oklahoma, has had two tornadoes as well as severe flooding causing some evacuations.

Episcopal Relief & Development is in touch with the Diocese of Missouri as it prepares to respond the needs of communities affected by the tornadoes, flooding and severe weather. The organization said earlier this week that its U.S. disaster team is supporting dioceses in their potential response efforts to flooding across the Midwest this spring.

The extreme weather that has ripped through the country’s midsection began late last week with a string of tornadoes from Nebraska to Texas. Some injuries and home damage were reported near the airport in Tulsa, but no fatalities were blamed on the more than 50 tornadoes spotted across the region May 17-20.

Three people died on May 21 in two separate traffic incidents, in Missouri and Oklahoma, related to heavy rain and flooding, and a tornado-related death was reported May 22 in Iowa, according to AccuWeather.

Then, overnight May 22, a new round of tornadoes and thunderstorms passed through central United States, including the tornado that hit Jefferson City.

Kenneth Harris, 86, and his 83-year-old wife, Opal, were found dead about 200 yards from their home near Golden City in the southwest corner of Missouri, and Betty Berg, 56, was killed and her husband, Mark, seriously injured when their mobile home was destroyed, according to the AP.

The town is less than an hour’s drive from Joplin, Missouri, which was devastated eight years ago by an EF-5 tornado that killed more than 130 people.

“Last night’s tornado activity and the increased flooding has been devastating our state,” Missouri Gov. Mike Parson said May 23 on Twitter.

Last night’s tornado activity and the increased flooding has been devastating our state.

This morning we took an aerial tour of Jefferson City to see the damage firsthand and learn what support our emergency personal need. Help the recovery – STAY CLEAR of debris. pic.twitter.com/zIXSlCnufb