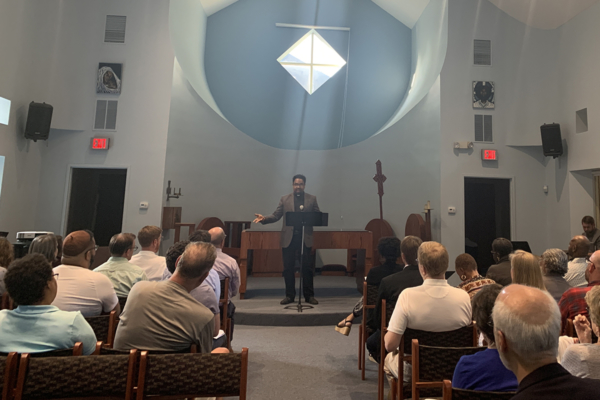 [Episcopal News Service] Twenty Episcopal priests and deacons are wrapping up a weeklong pilgrimage in Atlanta, Georgia, organized by the Absalom Jones Center for Racial Healing as a pilot program that could become a new model for furthering The Episcopal Church’s racial reconciliation work.

Participants in the center’s Justice Pilgrimage were selected from all 20 dioceses in the church’s Province IV, which encompasses all or part of nine states in the Southeast. Diocese of Atlanta Bishop Robert Wright spoke to the group on May 19 to welcome them.

“The common purpose is to understand the American story in all of its nuance and figure out where the opportunities for healing and justice are,” Wright said May 23 in an interview with Episcopal News Service. That nuance, Wright explained, is what allows people from different backgrounds to come together and feel comfortable openly and honestly discussing difficult questions of race and racism.

“It doesn’t really call for self-flagellation. Shame is not the goal,” Wright said. “It is to understand our role in this very complex thing and to seek healing and justice.”

The pilgrimage includes a full itinerary of lectures and discussions at the Absalom Jones Center in Atlanta, as well as a two-day bus trip with stops at African American historical sites in Savannah, Georgia, and Charleston, South Carolina. When it concludes May 24, the pilgrims’ work will only be beginning.

“It’s an intensive week, and then we’re asking them for six months’ commitment,” Absalom Jones Center Executive Director Catherine Meeks told ENS. During the next six months, participants will be asked to develop and follow a plan to work toward dismantling racism in their parishes and communities, and afterward, they will reunite in Atlanta to talk about that work with each other.

“I’m hoping that these people will become allies with each other and supportive, and the center will serve as a catalyst for trying to make that happen,” Meeks said.

She and other organizers then will use the experience of this first Justice Pilgrimage to refine future efforts of the Absalom Jones Center, which is a partnership between the Diocese of Atlanta and Presiding Bishop Michael Curry’s office. The center aims to host two such pilgrimages annually for groups of 20 to 25, starting in May 2020. Participants are responsible only for airfare to get them to Atlanta; their food, lodging and the bus trip are covered by the center.

The ultimate goal is to deepen The Episcopal Church’s work of racial reconciliation at the local level. General Convention has long prioritized such work, requiring dioceses to facilitate anti-racism training for clergy and lay leaders, but the implementation of those mandates has been uneven from diocese to diocese.

Meeks, who previously led the Diocese of Atlanta’s Beloved Community: Commission for Dismantling Racism, inspired the development of the church’s Becoming Beloved Community framework that was unveiled in 2017. Now, at the Absalom Jones Center, she sees the Justice Pilgrimage as a new, meaningful way of engaging clergy members directly to take action in their contexts.

“I’m trying to see if we can create a collection of priests and deacons that are empowered and inspired to go deeper than has been happening in the local parish,” she said. “The center is really focused on the idea of localizing parishes to do the work of dismantling racism.”

Presenters this week have discussed a range of topics with the 20 participants. Richard Hughes, a religion professor at Lipscomb University in Nashville, Tennessee, talked about how insidious notions of white supremacy are ingrained in American society. The Rev. Ken Swanson, rector at St. David’s Episcopal Church in Roswell, Georgia, spoke of his awakening as a white man to his own privilege and a personal call to help dismantle racism.

Byron Rushing, vice president of The Episcopal Church’s House of Deputies, presented a historical overview of systems of racism in the United States and ways they are connected to the church. Meeks spoke about how minorities often internalize oppression, affecting their quality of life. And the Rev. Lynne Washington, priest-in-charge at Atlanta’s Church of the Incarnation, gave a presentation about African and African American spirituality.

The bus trip was a way to build on those discussion by giving participants firsthand experiences with historical sites and artifacts.

One stop allowed participants to visit Savannah’s Weeping Time Memorial, which marks the sale of hundreds of slaves at once in 1859 by plantation owners to avoid bankruptcy. The pilgrimage also visited the Old Slave Mart Museum in Charleston. Professional tour guides were hired to share their expertise on the tragic history represented by such sites.

Civil rights pilgrimages by congregations are increasingly common in the South, particularly in Montgomery, Alabama, since the opening in 2018 of the National Memorial for Peace and Justice, which memorializes lynching victims. One parish, St. Bartholomew’s Episcopal Church in Atlanta, took 82 people to the memorial and other sites on a pilgrimage last August.

St. John’s Episcopal Church in Tallahassee, Florida, embarked on a similar pilgrimage to Alabama in February. And just this week, while the Absalom Jones Center hosted its pilgrims in Atlanta, more than 50 Episcopalians spent several days in Alabama on another pilgrimage to civil rights sites there organized by the Washington, D.C., chapter of the Union of Black Episcopalians.

Meeks praises such efforts toward racial healing. She also sees the Absalom Jones Center’s pilgrimage as taking a somewhat different approach, of not just touring sites but also fostering intensive discussion and reflection that will continue long after participants leave Atlanta.

“The commitment on the front end is you will engage this work and then come back together in six months to talk about what you did,” she said.

Jesus provided the original Christian model for taking on this kind of “interior work” and also seeking the “durable fellowship” with other disciples to inspire greater love for our neighbors, Wright said.

“People are going out with more than information,” he said. They also will take home “some embodiment of truth to go out and make a difference.”