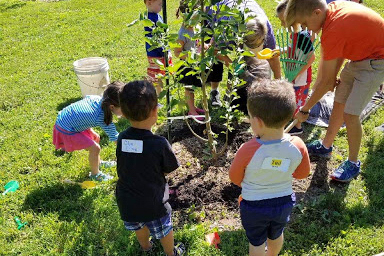 Children help apply mulch to one of the apple trees planted on unused space next to Emmanuel Episcopal Church in Webster Groves, Missouri. Photo: Dale Penrose

[Episcopal News Service] Dale Penrose is no Johnny Appleseed, though he’s played that role before, on the church lawn last fall for preschoolers.

The lawn, a grassy wedge just east of the parking lot at Emmanuel Episcopal Church in Webster Groves, Missouri, isn’t much of a lawn anymore, but rather a budding apple orchard. It’s a fitting addition to a neighborhood known as Old Orchard, where apple cultivation once was prevalent, and the congregation hopes someday to reap the full fruits of what Penrose has sown.

“This year we might get a bushel or two,” Penrose said when Episcopal News Service caught up with him by phone to ask about the orchard he planted for Emmanuel in spring 2016.

A church with an apple orchard? Feeding ministries (Emmanuel has one of those, too) aren’t unusual. Many churches have gardens, though an orchard is a unique twist. This one has more trees – 15 – than Jesus had apostles. So far, no serpents have tempted young couples here with forbidden fruit.

More troublesome were the snacking deer that prematurely trimmed several of the trees, and some others were inadvertently felled by lawnmowers. After several replantings, the orchard at Emmanuel is back to full strength. As it grows, the congregation is touting the orchard as an opportunity to beautify a prominent city corner, to provide produce for its food pantry, to teach lessons in environmental stewardship and simply to enjoy one of God’s tastiest creations.

“They’re a durable food,” the Rev. Jennifer Hulen, rector at Emmanuel, told ENS. “I’m a hiker and a camper, so apples are good trail food. And we’re all kind of on a trail in life.” 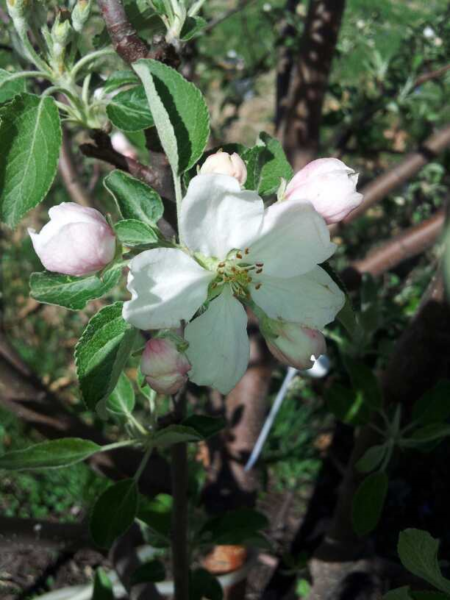 The apple orchard at Emmanuel Episcopal Church features 14 varieties of trees, and while the trees are expected to produce some fruit this year, a full harvest is still a few years away. Photo: Dale Penrose

The orchard doesn’t include Hulen’s favorite variety, Fuji, but it has 14 others: Arkansas Black, Baldwin, Braestar, Cox’s Orange Pippin, Franklin Cider, Golden Delicious, Orleans, Red Rome, Suncrisp, Wagener, Wealthy, Winesap, Wolf River and Yellow Transparent. Penrose planted two Golden Delicious trees because they are universal pollinators, and all are well suited for the climate and soil in Webster Groves, a suburb that borders St. Louis to the west.

Emmanuel Episcopal Church was built in 1886 on property given to the congregation by the Lockwoods, a family that owned 80 acres in the Old Orchard neighborhood. The Lockwoods and other families had long maintained orchards in the area. “In the spring the blossoms transformed the orchards into fairyland, and in the fall the orchards smelled like cider,” the Webster Groves Historical Society describes in its guide for a walking tour of the neighborhood.

Penrose, 58, has attended Emmanuel since 2001, and around the time the church was getting ready to celebrate its 150th anniversary, he had church-based agriculture on his mind.

“We had a large space of unused land at Emmanuel, but it was way too visible to put in a garden,” he said. If you fall behind on the weeding, Penrose explained, suddenly your street-side garden becomes an eyesore. “So, I thought, well, you know putting an orchard in there would look really pretty. It would fit the community, and it would provide just as much food as a garden would.”

He brought his idea to the rector, Hulen’s predecessor – whose name, no fooling, was the Rev. Dan Appleyard – and after discussions with the senior warden and church committees about cost and upkeep, Penrose won approval to begin planting. 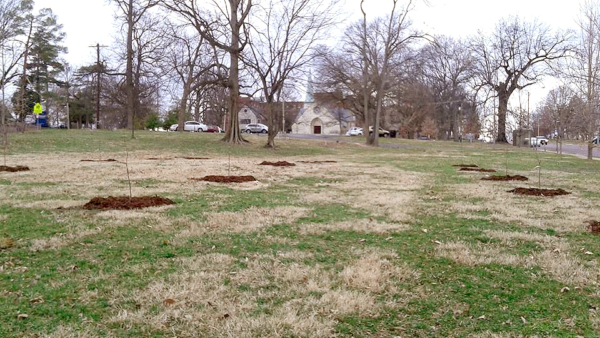 Dale Penrose planted 15 apple trees at Emmanuel Episcopal Church in 2016, though he had to replant some of them after run-ins with deer and lawnmowers. Photo: Dale Penrose

Each tree cost $40 to $50. Appleyard bought one with money from his discretionary fund, and the senior warden chipped in for a second. Penrose covered the cost of the rest, selecting them from a nursery north of St. Louis. At full size, they will grow up to 20 feet tall, he said, and a full harvest after all 15 trees mature will yield an estimated 100 to 150 bushels of apples a year, or about 3 tons.

“Not bad for an unused green space,” Penrose said.

The 14 varieties also will peak at different times from mid-July to early November, starting with the Yellow Transparent. That’s Penrose’s favorite apple, because it reminds him of growing up in western Iowa among the apple trees and orchards maintained by his extended family. 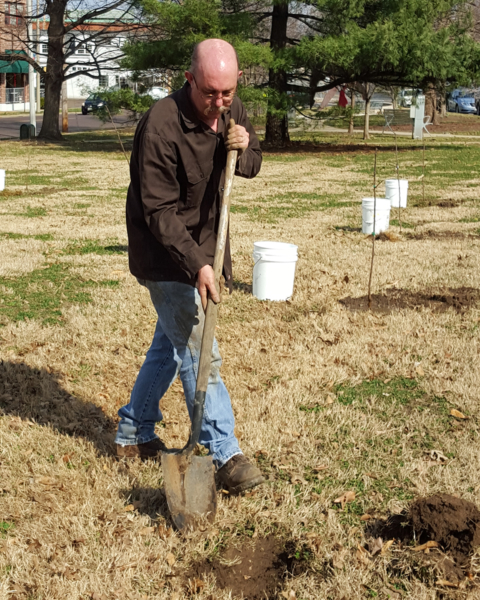 “That was the tree in my grandparents’ front yard,” he said. “When we were kids, we were climbing that tree eating apples late June to mid-July.”

Penrose also maintains a couple apple trees at his own home, as well as a pear tree and some gooseberry bushes. He has some past experience in commercial gardening but now works on equipment maintenance for a small brewery in St. Louis.

The orchard at Emmanuel has become a personal passion for Penrose, who enjoys involving children of the congregation in his work. Each year, students of Emmanuel’s vacation Bible school have helped with mulching around the trees.

And for a congregation that tops 200 worshippers on a typical Sunday, the orchard offers a tangible example of faith in action and a spiritual connection to the land, Hulen said. “To know God through creation and to be able to know we’re partners in taking care of the Earth and we’re partners in providing out of our abundance to our brothers and sisters who have a struggle.”

The orchard has room for Penrose eventually to add up to nine more trees, possibly including a peach tree and a pear tree. It’s a unique ministry, but Penrose said it need not be exclusive to Emmanuel.

“I think it’d be a great thing for other churches to do,” he said, “if they had the space.”