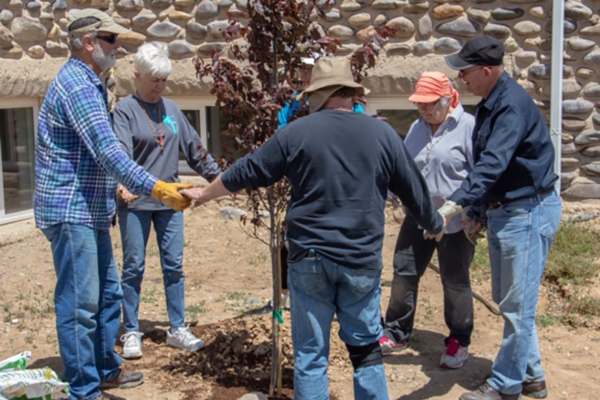 [Diocese of West Texas – Farmington, New Mexico] Generations of Navajos were born, were treated and died at the San Juan Mission Hospital before it closed five decades ago. Occasionally, someone stops to ask about a hospital record, now kept at All Saints Church, across the gravel parking lot from the hospital building.

Founded in 1918, All Saints grew into the San Juan Mission Hospital in 1922 and was among three medical missions established by The Episcopal Church that served as the only medical facilities for the 27,000-square-mile Navajo Nation.

Today, after serving the medical needs of the Navajo Nation for decades, the old hospital is taking on a new life as a place to care for tribal members’ emotional wellness and physical needs.

In 2016, The Episcopal Church in Navajoland launched a massive restoration project to transform the boarded-up stone structure into the Hozho Wellness Center. The center will serve Navajo women and families by offering support, counseling and classes, from parenting to cooking, nutrition and art – seeking to restore their sense of hózhó, a Navajo term meaning balance, harmony and life. 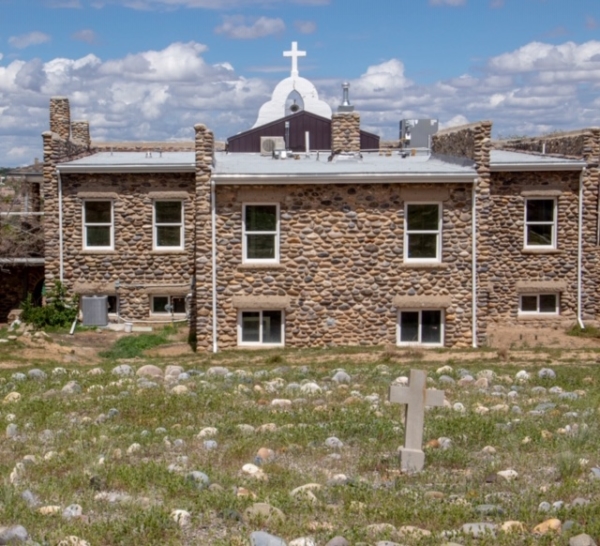 While the upper floor will serve as the wellness center, the ground floor will be the home of Cheii’s Web Development, a startup enterprise created by Navajoland to teach young people coding skills and create jobs in web development, graphic and logo design, social media management and photography.

Funding for the project has been provided by The Episcopal Church and other grants and donations.

Despite numerous setbacks, including a fire that required structural repairs, enough work had been accomplished by the spring of 2018 to enable Presiding Bishop Michael Curry to consecrate its small chapel during his tour of Navajoland. The entire project was scheduled for completion in mid-2019.

The wellness center project also has had volunteer help from the Episcopal Diocese of West Texas and Trinity Church Wall Street. A six-member delegation from the Diocese of West Texas spent a week this spring working on the center, following another team from the diocese that did construction work and painted in fall 2018.

Amid endless runs to the landscape nursery and the local home improvement warehouse for supplies paid for by the Diocese of West Texas, the small group of volunteers installed a drip irrigation system for future landscaping foliage; added a drainage pathway to route rainwater away from the building’s foundation; planted two apple trees, a pear tree and a plum tree; painted the interior staircase; provided advice on how to install the mantel on the fireplace; cleaned out the yard of the former rectory, now used as a dormitory for visiting volunteers; hauled off rolls of old carpet to the dump; and grubbed up a vegetable garden. 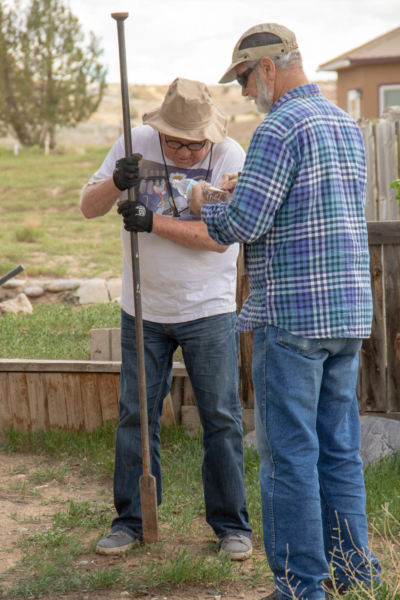 “I think this is wonderful,” said volunteer Tom Lee, a retired district attorney and judge and a member of St. Christopher’s Episcopal Church in Bandera, Texas. “I hope it’s a blessing to the Navajo. We’re trying to give them a place of peace and joy.”

The Hozho Wellness Center and All Saints Church are part of The Episcopal Church in Navajoland, the only area mission in the church. As such, it functions like a diocese with its own bishop but is under the oversight of the presiding bishop and House of Bishops. It was formed in 1977 by the House of Bishops from portions of the Dioceses of Arizona and Utah. In 1979, the General Convention added a part of the Diocese of the Rio Grande.

The area mission overlays the Navajo Reservation, home to about 125,000-150,000 Navajos, of whom about 1,000 are Episcopalians. At one time, as many as 5,000 Episcopalians lived there. All Saints, with the Rev. Michael Sells as its priest-in-charge, is one of nine Episcopal churches in the region.

The Navajos call themselves The Diné – The People – and are one of the largest American Indian tribes in the United States. Their culture is centered on a divine creator, and their tradition of worship rooted in the earth.

The Navajos are famous as Code Talkers who, in their native tongue, passed secret messages among U.S. forces fighting the Japanese in World War II. The Japanese never cracked the language, which helped lead to their defeat.

Bailey visited the headquarters of the West Texas diocese in San Antonio in December 2017 and spent nearly a day talking about the Navajos and the priorities.

“He told us about his background, about the needs, about the challenges of working in Navajoland, the challenges of the people,” said Marthe Curry, director of world mission development for the diocese and leader of the spring trip. “When he came, he said that we don’t want your money, we want your partnership.”

Bailey returned to West Texas in February 2018 to speak at the annual Diocesan Council.

Since then, several teams from the diocese have visited Navajoland to listen and explore needs.

A struggle across generations

The most traumatic experience for the Navajo occurred on the Long Walk in 1864 when the U.S. Army forcibly removed the Navajo from their homeland in Canyon de Chelly and marched them across New Mexico during a brutal winter to Bosque Redondo at Fort Sumner. Their possessions were taken, farmlands destroyed and livestock killed. They were not allowed to return to their homeland until 1868.

The Navajo continued to suffer other abuses under the government, such as their children being taken, placed in boarding schools and punished for speaking their language and practicing their culture.

The area, which encompasses parts of three states – New Mexico, Utah and Arizona – has four casinos yet only three hospitals.

The unemployment rate is 47 percent, a staggering 90 percent in the most remote and isolated pockets on the Navajo Reservation. A third of the people have no running water and haul water to their homes in barrels on the beds of pickup trucks. Electricity is equally scarce.

Nearly a third of the people live in extreme poverty. There are also high rates of alcoholism, drug abuse, domestic abuse and diabetes and other health issues. Suicide rates are high, especially among young people.

Church leaders are also sensitive about how to blend Anglican traditions in culturally appropriate ways that also honor the Navajo faith traditions.

The Navajo beliefs and Episcopal beliefs are “different faiths,” said the Rev. Cornelia Eaton, one of five representatives from The Episcopal Church to attend the 2019 United Nations Permanent Forum on Indigenous Issues.

“I can blend the two faiths together,” she explained while standing on the doorsteps of All Saints. She was raised an Episcopalian at St. Michael’s Episcopal Church in nearby Upper Fruitland. “It’s a good mix. It’s a good challenge – how God can work in different ways. We can be a church that is very unique.”

Sells, priest-in-charge of All Saints, majored in economics at Arizona State University and is newly ordained. He decided to enter the ministry after trying law school for a year and finding that it wasn’t the career he wanted. With the encouragement of Bailey, Sells attended Church Divinity School of the Pacific and was placed at All Saints last fall.

“My dream is that my little church will be self-sustaining and eventually do outreach,” said Sells, himself a Navajo. Like Sells, most members of All Saints and other Episcopal churches here were raised as Episcopalians rather than joining the denomination later.

Sells sometimes blends the Anglican and Navajo cultures together in a service, such as incorporating Navajo prayers, eagle feathers and cedar blessings. To acknowledge their traditions, Sells invites his congregation to gather in the sanctuary of All Saints Church to sing Navajo songs and traditional hymns in their native language.

Hope for the future

This late spring day, as the last long rays of the sun settled across the flat-topped mesas of the Navajo Reservation, the West Texas volunteers joined with a half-dozen Navajos from All Saints in lifting their voices together in singing the famous hymn of redemption, “Amazing Grace,” but only after the visitors were given a brief lesson in pronunciations. 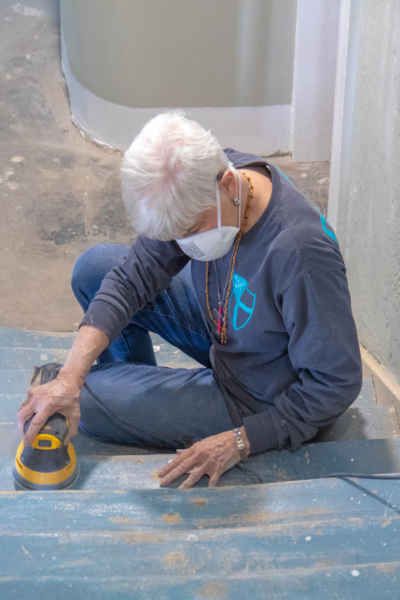 “Our teams are very impressed and interested and learning about their religion,” said Curry, the West Texas world mission director. “We’re trying to see overlaps. They have been fascinated with the Navajo liturgy. Our teams have been interested in their perspective about God,” especially respect for the creator.

One effort to help the Navajo become more self-sufficient is Shimá of Navajoland, a market for hand-crafted soaps, honey and blue cornmeal.

Curry has been asked to help create a master plan for the area. One main area of focus is St. Christopher’s Episcopal Mission in Bluff, Utah, whose 8-acre campus and multiple buildings are listed on the National Register of Historic Places. It also provides a community garden and free water well for nearby residents.

“It’s like a ghost town,” she said. “There are lots of buildings, but most of them need restoration and repairs. Some of them are falling apart.”

The Diocese of West Texas has tasked Rob Watson, director of camps and conferences at the diocese, to get involved at St. Christopher’s and help plan a way to transform it into a retreat center.

“He was beside himself with all the potential. It’s gorgeous out here,” Curry said.

With the help of the Rev. Kay Rohde, a former National Parks ranger who now is priest-in-charge at St. Christopher’s, a list of needs was drawn up for every building and input was obtained about what the Navajo would like to see happen there.

An hour away, at St. Mary’s of the Moonlight Episcopal Church near Monument Valley, Utah, Bailey has a vision of developing accommodations, such as a hostel or hotel, to serve the area’s bustling tourist industry.

The goal is to “tie everything into the master plan rather than everybody having their own little project,” Curry said.

The volunteers who have visited Navajoland on numerous work and listening trips over the past year return home deeply touched by their experience on the arid landscape and with the Navajo.

“I developed a huge interest in the people and the land,” Loggie said. “The land is holy. That was so profound to me, I just felt drawn in. You can feel it in the wind, you can feel it in the earth. It’s a presence, it’s almost a presence you can’t see. But I felt it in everything. I cried a lot when I was there. It was a very spiritual experience, very emotional.”

– Mike Patterson, a freelance writer and photographer, is a member of St. Michael and All Angels Episcopal Church in Blanco, Texas. He is a frequent contributor to The Church News and the Episcopal News Service.