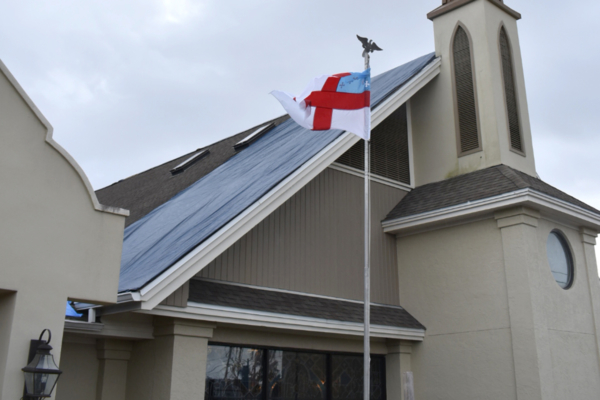 Part of the roof at Holy Nativity Episcopal Church in Panama City, Florida, is covered in blue tarp Jan. 12 after being damaged in Hurricane Michael. Photo: David Paulsen/Episcopal News Service

[Episcopal News Service] Episcopal congregations in Florida’s Panhandle were approved recently for nearly a half-million dollars in aid from the Diocese of the Central Gulf Coast and Episcopal Relief & Development to repair their churches and to serve their communities, which are still recovering from Hurricane Michael seven months ago.

The diocese is preparing to distribute a little more than $200,000 to cover repairs and insurance deductibles for eight churches in the region – including one, St. Luke’s Episcopal Church in Marianna, that just recently got clearance to return to its sanctuary. Because of structural damage, St. Luke’s has been worshipping in its parish hall since the hurricane, diocesan disaster relief coordinator Chris Heaney told Episcopal News Service.

Episcopal Relief & Development approved a $250,000 grant that will be distributed among nine congregations that have ongoing or new ministries serving individuals and organizations as they work to bounce back from the devastation caused by Hurricane Michael.

Central Gulf Coast Bishop Russell Kendrick, in an email to the diocese, also urged Episcopalians to join The Episcopal Church’s Office of Government Relations in advocating for Congress to pass a long-stalled disaster relief bill.

“This is a concrete way that each of us can be an advocate for our friends living in the wake of Hurricane Michael (as well as many other disasters),” Kendrick said. “This is a way we can do our part to turn up the volume of love and justice.”

Hurricane Michael made landfall Oct. 10 at Mexico Beach with an estimated wind speed of 155 mph. Some residents of Florida’s Panhandle lost everything or nearly everything – trees gone, homes damaged or destroyed, businesses darkened, schools closed, jobs up in the air and the uncertainty of how to press on. 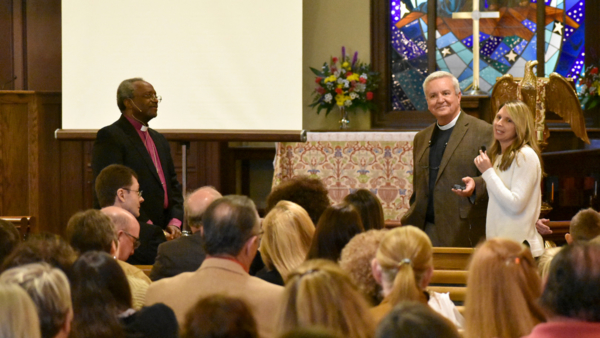 When Presiding Bishop Michael Curry visited the region in January, he was welcomed by Episcopalians clinging to hope amid the slow progress toward recovery. Roofs were still patched with blue tarps. Piles of debris dotted the roadsides. Holy Nativity Episcopal School in Panama City was a construction zone, and students attended lessons in makeshift classrooms set up at nearby Holy Nativity Episcopal Church.

Curry, speaking to a packed crowd at the church, said he was inspired by residents’ perseverance.

“To hear what you have done and are doing, therein is hope and grace and the power of love,” Curry said.

Cynthia Fuller, dean of students at Holy Nativity Episcopal School, was among those who heard Curry speak that day, and since then, she has taken a leadership role in a volunteer group called Michael’s Angels, which advocates on behalf of hurricane victims and their communities. It started when someone posted a call to action on Facebook, Fuller said in an interview with ENS, and that call brought about 75 women to an inaugural meeting in February.

“We were trying to figure out what can we do to help our community,” Fuller said. She was one of six women who stayed after the meeting to plot next steps. 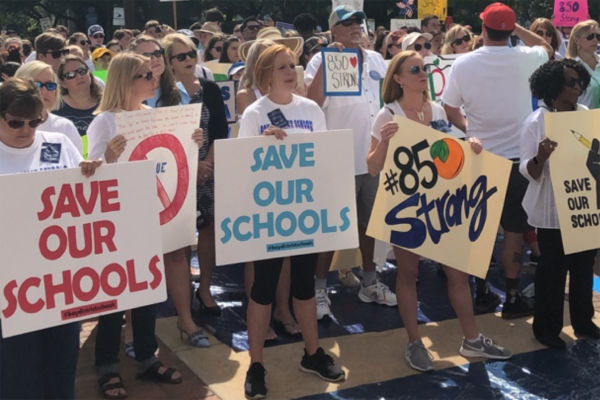 The volunteer women’s group Michael’s Angels leads a rally in April in front of the Florida state Capitol in Tallahassee to advocate for federal disaster aid. Credit: Michael’s Angels

She now heads the education subcommittee of Michael’s Angels, with much of her work aimed at helping the large number of students in Bay County schools who are effectively homeless because of the hurricane. Other subcommittees were assigned health care, government relations, development and communications.

Michael’s Angels organized a rally in front of the state Capitol in Tallahassee in April to draw attention to recovery efforts and to put pressure on the federal government to provide disaster money. Fuller said Panhandle residents are frustrated that more than 200 days have passed since their communities were upended by Hurricane Michael, and Congress still has not approved additional aid.

This week, congressional negotiators said they were close to a deal on a $17 billion package of aid for disaster areas in several states, as well as Puerto Rico, the Washington Post reported. A Senate vote could come next week to end a months-long impasse over the funding.

The Office of Government Relations issued an action alert on May 14 to its Episcopal Public Policy Network, or EPPN, urging members to contact their senators and voice support for the legislation. EPPN noted that one of the stumbling blocks has been the Trump administration’s attempts to add border security funding to the bill.

“Mixing emergency and disaster relief with the Administration’s border policy threatens the ability of our government to respond to the immediate needs of people who are suffering,” the action alert says. “Our nation is long overdue for a serious and thorough reform of our immigration system and policies, but this should not be done while disaster relief is needed.”

Until federal aid arrives, Central Gulf Coast congregations are extending a helping hand in a variety of ways, now with financial backing from the diocese’s newly approved grant from Episcopal Relief & Development.

In Apalachicola, for example, Trinity Episcopal Church was not damaged by Hurricane Michael, but some of its neighbors were hit hard by the storm, Heaney said. Since then, Trinity has offered a day care ministry to assist families with children who aren’t in school and need care while their parents are at work.

A variety of other ministries also will receive part of the grant money, including food pantries in communities struggling after the hurricane. Those ministries existed before the storm but are in greater demand now, Heaney said. The same goes for Suppers at Grace, a continuing ministry at Grace Episcopal Church in Panama City Beach that has grown to serve storm victims.

Hurricane Michael was “like nothing we’ve ever seen over here, and I hope we never see it again,” Fuller said, and she described the recovery as far from complete. “You can drive down every street and block and see houses that are still sitting there either with a tarp on or half caved in.”

She, her husband and their 12-year-old son and 7-year-old daughter rode out the hurricane while huddled in their home in Callaway, a Panama City suburb, and they feel fortunate for surviving. A tree crashed through the window of their son’s bedroom soon after the family had fled the room to retreat into a bathroom.

Though their house sustained little additional damage, some neighbors’ homes are a total loss. Fuller said local pride has helped the community pull through such turmoil, and she also credits her faith.

“Every day, every single day, I pray for strength and courage and wisdom, and then patience,” she said. “It’s definitely strengthened my faith a lot. It had to. I don’t see any other way I would have been able to get through this.”