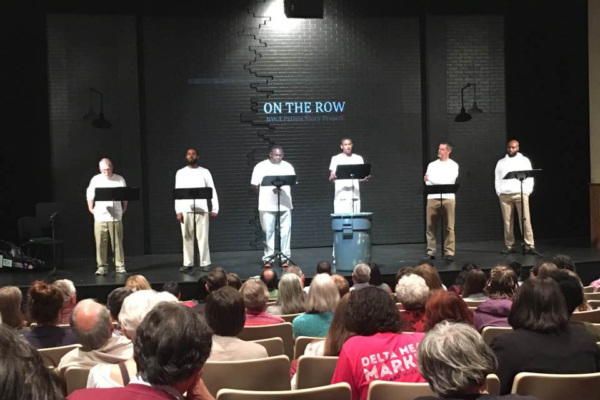 “On the Row” is a production of Prison Story Project featuring six actors reading the words of death row inmates in Arkansas. Photo: Kathy McGregor

Prison Story Project, founded by Kathy McGregor at St. Paul’s Episcopal Church in Fayetteville, spent the summer of 2016 helping 11 inmates write about their lives and the experience of awaiting execution at the Varner Supermax prison in Grady, Arkansas. The inmates’ stories are collected in “On the Row,” a script for six actors. The script’s incarcerated authors also formed the audience for its first performance on Oct. 8, 2016.

Six months later, two of the 11 contributors to “On the Row” were executed by the state of Arkansas.

The executions drew national attention as part of the state’s rush to carry out eight executions in April 2017 before Arkansas’ stock of lethal injection drugs was to expire. Four of the eight men were put to death, while the other four executions were postponed amid vocal opposition from anti-death penalty activists, including Arkansas Episcopalians. The Episcopal Church has long taken a public stance against the death penalty.

Although the executions are referenced at the beginning of “On the Row,” McGregor told Episcopal News Service that the inmates’ words are presented mostly as they were written, before anyone knew of the state’s plans for expedited executions. The script is structured to build a compelling narrative arch, and the stories avoid any overt arguments in favor of abolishing the death penalty.

“We’re not political about that. We just let the words of the inmates speak for themselves,” McGregor said, yet the project seeks to show the humanity behind those words in ways that may surprise listeners. “The audiences should come prepared to feel changed at the end of it,” she said.

The Episcopal Church’s opposition to capital punishment is well established, dating back more than 60 years. General Convention has passed numerous resolutions on the issue. A resolution adopted last year calls for all death row inmates’ sentences to be reduced, orders letters to that effect be sent to all governors of states where the death penalty is legal, and enlists bishops in those states to take up greater advocacy.

Prison Story Project makes clear that readings of “On the Row” are presented in the context of The Episcopal Church’s ongoing advocacy. It is promoting the upcoming tour as “a call to action … for parishes and dioceses to explore and understand the reasons for our opposition; the inequity as applied to minorities, the poor and those who cannot afford adequate legal representation; the contribution to continued violence, and the violation of our Baptismal Covenant.”

The number of executions nationwide has dropped steadily since 1999, from a high of 98 that year to 20 in 2016, according to the Death Penalty Information Center. Arkansas is one of 30 states with the death penalty, including all of the states on the Prison Story Project’s four-city tour – Missouri, Kansas, Oklahoma and Texas.

The June performances were “the easiest bookings I ever had to do,” McGregor said. The host churches, listed here, didn’t hesitate to open their doors for readings of “On the Row”:

St. Paul’s in Kansas City has been active in a range of social justice ministries that emphasize giving a voice to the voiceless in society, the Rev. Stan Runnels said in an interview with ENS, so it seemed natural to host a performance of “On the Row” in the church’s parish hall.

“We believe very strongly in the power of the narrative and the power of the voice of the marginalized to tell their stories better than anybody else,” said Runnels, who is rector at St. Paul’s.

Runnels spent four years in the late 1980s as a volunteer chaplain to death row inmates in Mississippi. He had just recently been ordained as a priest, and he experienced a “deep monasticism” on death row that had a profound effect on his own spiritual growth.

When McGregor founded Prison Story Project in 2012, her initial focus was on holding writing workshops at a correctional center for women in northwest Arkansas. A second class of inmates in 2013 produced stories that were compiled in a script titled “Stories From the Inside Out,” with performances in the prison and out in the community.

From the start, the hope was that writing would allow the inmates to face the truth of their lives and find redemption, McGregor said. The “outside” performances of the inmates’ words achieved a second goal of giving the public a sense for the real lives of those locked away out of sight.

After several subsequent classes, McGregor and her team turned their focus to death row. They reached out to officials at Varner in 2015, and after months of conversations, they received permission to begin working with death row inmates in May 2016.

“We were a little nervous, but it didn’t take long for us to settle in,” McGregor said.

Out of 34 inmates on death row at the time, 11 volunteered and were selected for the project. McGregor and the project’s creative writing director met with the inmates once a month and followed up by email, giving them prompts to begin their writing and coaching them on techniques. Write from the heart, McGregor told them.

The written compositions were then shared with the project’s theater director, Troy Schremmer, who suggested additional prompts to elicit more detail from the inmates. When Schremmer had enough material, he compiled the inmates’ writings into the narrative that became “On the Row.”

Six actors visited Varner for their first staged reading in front of the inmates, who were separated in individual cells because they are not allowed direct contact with each other, McGregor said.

Four of the “On the Row” writers were among those scheduled for execution. Jack Jones, sentenced for the 1995 rape and strangulation of a 34-year-old woman, was executed on April 24. Kenneth Williams was executed April 27 after killing a university cheerleader in 1998 and then killing another person after escaping from prison in 1999. Last-minute stays of execution were granted for the other two inmates who had worked with McGregor’s team.

The “On the Row” tour in June is backed by several grants, including from the Episcopal Evangelism Society. A second tour is planned for October around Arkansas. In addition, Prison Story Project will record one of the performances for a video that will allow McGregor to hold screenings and question-and-answer sessions without requiring actors and directors to join her each time.

After getting to know the inmates personally, McGregor said she is committed to sharing their stories to all who will listen, “until they abolish the death penalty in every state.”