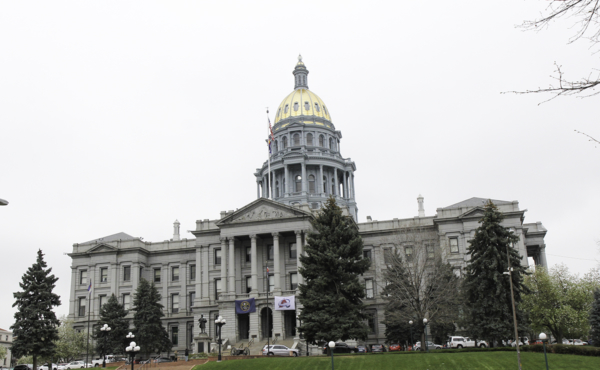 From Feb. 5 to the end of the Colorado General Assembly’s first 2019 regular session, an interfaith coalition held “Faithful Tuesdays” events at the capitol in Denver, focused on supporting specific legislation and forwarding a shared narrative of justice, love, healing, reconciliation and care for others. Photo: Lynette Wilson/Episcopal News Service

[Episcopal News Service – Denver] A coalition of interfaith leaders and their allies regularly brought a social justice message to the Colorado General Assembly’s first 2019 regular session. The effort was formed from long-standing relationships rooted in multiple faith traditions, all recognizing a common humanity, shared values and a desire to change the public narrative.

“About a year and a half ago, we started talking about what it would look like, what kinds of issues we could really come together on, and the power that we might have if we joined forces and called on both the people in our congregations, as well as our legislators – who are our leaders – to lead out of values grounded in our shared humanity and human dignity,” said the Rev. Amanda Henderson, executive director of the Interfaith Alliance of Colorado.

Over the last two years of anti-immigrant sentiment, increased incidences of racism and racial violence, and the proliferation of shootings in schools and houses of worship, the effort, coalition members agreed, has taken on greater urgency. Hence, Faithful Tuesdays.

“I feel like we have this real challenge to the soul of who we are, and there are so many powers that are seeking to divide us. There are real acts of violence happening in our faith communities and around our country at large that are grounded in hate and dehumanizing people,” said Henderson, who is a Disciples of Christ ordained minister. “We have a different story to tell, and we see that the time is urgent to tell a different story and to live a different story together.”

Interested in getting involved in advocacy? The Episcopal Public Policy Network is a grassroots network of Episcopalians across the country dedicated to carrying out the Baptismal Covenant call to “strive for justice and peace” through the active ministry of public policy advocacy. Click here to learn more and join.

The diverse coalition of interfaith leaders, organizations and community members who committed themselves to add a deeper, moral dimension to the public policymaking process in Colorado met weekly for Faithful Tuesdays. Their focus: “To advance a faith narrative and collaborative process that supports a just economy, promotes equity, and eradicates racism in Colorado.”

Beginning on the first Tuesday in February and continuing every Tuesday throughout the General Assembly’s first 2019 legislative session, which ended May 3, the coalition held events at the capitol focused on supporting specific legislation and forwarding a shared narrative of justice, love, healing, reconciliation and care for others.

Faith leaders and other committed citizens gather in the Colorado State Capitol for the first Faithful Tuesdays. Photo: Courtesy of Together Colorado

The “Reclaiming Jesus: A Confession of Faith in a Time of Crisis” initiative launched in March 2018 to “reclaim Jesus” from those believed to be using Christian theology for political gain. From its inception, Presiding Bishop Michael Curry has been on board. 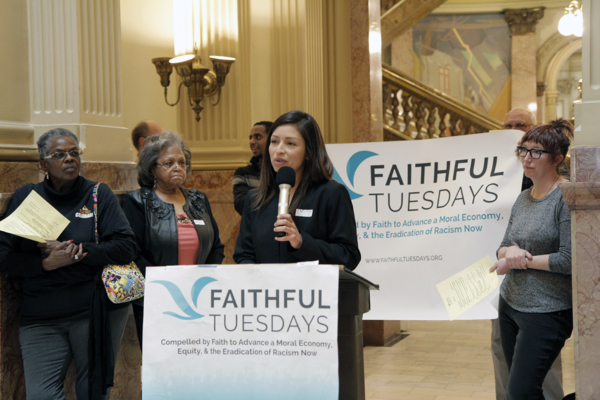 Laura Peniche of Together Colorado testified April 30 in celebration of progress made on immigration, including the expansion of a driver’s license program for undocumented immigrants. In Colorado, 60%-70% of deportations begin with a traffic stop. Photo: Lynette Wilson/Episcopal News Service

On April 30, the last Tuesday of the legislative session, some 60 coalition members gathered one last time for a closing celebration and lament in the capitol’s south foyer. They celebrated the expansion of an existing bipartisan program that grants driver’s licenses to undocumented immigrants, a program widely support by the state’s dairy farmers; and they lamented setbacks to a proposed family leave program, which was relegated to a feasibility study. They also lamented a bill that would have allowed cities to set their own minimum wage.

“The laments that we talked about today were family leave. It’s something 9to5 working women have been the lead on” for the last five years, said Mike Kromrey, executive director of Together Colorado, a faith-based nonprofit that has worked alongside community leaders to uplift children and protect human dignity since 1978. “It was supposed to be a priority in the majority party this year, and we couldn’t get it over the finish line. It’s like an example of what we would see as modest pro-family legislation, but we have a long ways to go on that.

“And right now, we still have not secured another bill to allow cities to do a higher minimum wage; that got laid over today till tomorrow. We thought that was a relatively simple bill to allow localities to make their own decision – it doesn’t force anyone to ever do anything,” Kromrey said. “We have a lot of work to do, especially around economic issues. We’re very, very much a purple state; you know those kinds of issues are harder to forward either at the ballot box or the legislature or even in cities, but there are hopeful signs I would say.”

In the General Assembly, the House-initiated local wage option later passed the Senate with amendments. Interest groups spent the most money on the Family Leave Act, with more than 200 lobbyists tracking the bill.

“The family act has sort of been gutted at this point,” said Suggs. “It was one of Gov. [Jared] Polis’ primary focuses, but the Democrats only hold the Senate by two seats and the fact that they hold it by only two seats has shined a pretty bright light on the moderate to conservative Democrats that are in that chamber, so folks from the business community, whatever that means, have been opposed to it.”

The act would have covered more than maternity and paternity leave; it would have allowed employees to take paid time off to care for family members suffering from an illness or recovering from abuse. “For employees, it would add up to about $100 a year in taxes,” Suggs said. But ultimately, “employers didn’t want to pay for it.”

Some businesses were on board, like Illegal Pete’s, a popular restaurant chain that started in Boulder in 1995; and, theoretically, family leave could still take effect in 2022, said Suggs. 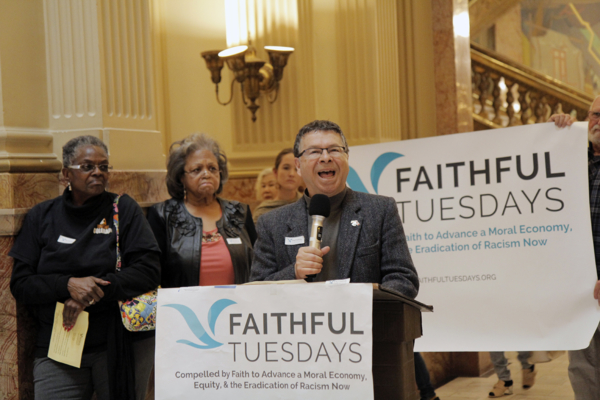 “The Colorado Council of Churches has been involved with several of the groups involved here, and we all have been doing work separately on advocating for social justice,” said Adrian Miller, the council’s executive director and a member of Campbell Chapel African Methodist Episcopal Church. “Toward the end of 2018, we all came together and said this might be a really cool thing to do. And what we had in mind was Moral Mondays in North Carolina and were just wondering, can we replicate that here in Colorado.”

The coalition wanted to show a more progressive Christian-interfaith voice in Colorado, which typically polls as one of the least religious states in the country, though believers are majority evangelical Christian.

“This is important especially in the Christian faith tradition, if you look at the Bible; I mean most of it is about social justice, and we are called in this time to be prophetic witnesses for social justice,” said Miller. “And I think it’s important that the progressive aspect of the church have a more public witness because I think when people hear Christianity these days, they think immediately of the very conservative segment of Christianity.”

A Durham, North Carolina, native raised Free Will Baptist, Suggs studied history at New York University, where he happened upon Grace Episcopal Church at the corner of 10th Street and Broadway in Manhattan. 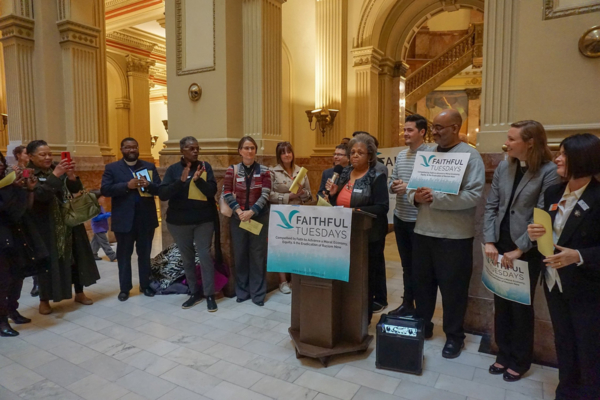 “I walked into the college service at the college parish with the college priest and was hooked from there,” he said. He later worked at summer camps for the Diocese of Long Island and, halfway through his senior year, became the camp and retreat coordinator at Camp DeWolfe. In September 2017, he joined the Colorado Episcopal Service Corps volunteering at the diocese in what is now his permanent role as director of advocacy and social justice.

“NYU’s history department is very good at teaching its students to think critically about why history has been written a certain way, who wrote it, why they wrote it, what was left out on purpose, what was put in on purpose, and how do we look at the ways history affects current structures,” said Suggs. “So that’s mostly how I approach my work now: What has led to this moment? What are the pieces that have led to this, and what are the pieces that we are completely forgetting?”

Though the legislative session has ended, the legwork at the local level and the coalition and relationship building continue year-round.