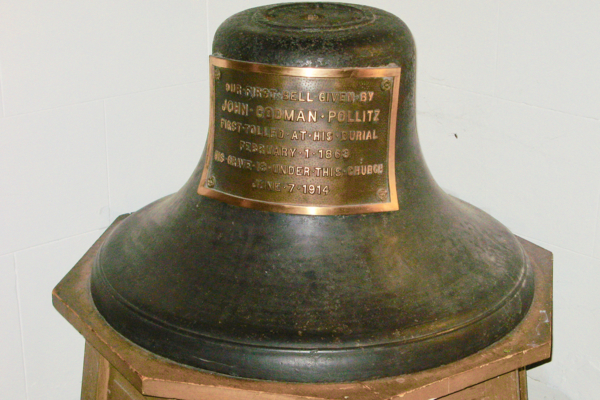 [Episcopal News Service] A 19-year-old parishioner who died while serving in the Civil War has been buried under Trinity Episcopal Church in Roslyn, New York, for more than a century, but until now, the final resting place of this hometown hero mostly was the stuff of legend.

Much of that legend is embodied by Trinity’s historic bell, which has long been on display at the church and bears the name of the young soldier, John Codman Pollitz, who paid for the bell out of his army pay. It was first tolled at his funeral, Feb. 1, 1863.

“His grave is under this church,” a plaque on the bell reads, providing no further detail about the location of the grave. The burial site hadn’t been accessed since 1914, and its place wasn’t marked.

Then last year, Trinity Episcopal embarked on an extensive renovation project that involved replacing the church’s floor. Parishioner Karl Hansen told Episcopal News Service he and other members of the congregation who were familiar with Pollitz’s history were curious if construction crews would find evidence of the grave. Sure enough, removing the old floor, they revealed Pollitz’s gravestone resting on the dirt of a crawl space.

“Legend had it that he was buried under there, but now it’s completely confirmed,” Hansen said, adding that the congregation brought in a specialist with a radar device to pinpoint the location of an underground box presumed to be Pollitz’s coffin.

The congregation plans to celebrate Pollitz while dedicating his burial site and a new plaque at a ceremony June 2 after the Sunday Eucharist.

The floor has since been restored, and the plaque was placed over the site of the grave, its location precise – 16 feet off the west wall and 15 feet off the south wall of the church, at the back of the church’s nave, Hansen said.

Though the location of his grave had been a mystery, Pollitz’s story was well known. He had taught Sunday school for the Episcopal congregation in Roslyn starting in 1859, a decade before Trinity parish was founded. The early congregation worshipped in a chapel that Pollitz thought was “a dream come true” for his religious classes, according to an excerpt of a 1969 parish history article that was reprinted in a 2007 newsletter.

He was barely 18 when he joined the Union Army. With his regiment in New Bern, North Carolina, he fell ill and died on Jan. 7, 1863. The parish history reported exhaustion as the cause of his death. A 1914 article in The New York Times about Pollitz said he died of “camp fever.” Hansen, who served in the Marines in the early 1970s, said he and others suspect Pollitz succumbed to dysentery.

Whatever the cause, he was remembered at Trinity as a hero. His remains were buried “under the shadow of the chapel belfry,” the newsletter article says.

The bell he had purchased for the congregation arrived at about the same time that his body returned home for burial, and it “was sweet in tone” when it first tolled at his funeral, according to the Times. The bell soon produced a note, however, that suggested to the congregation that it had cracked, prompting the decision to lower it, turn it upside down and fill it with dirt and flowers “to serve as an urn in the grave enclosure” at the chapel, the Times reported. 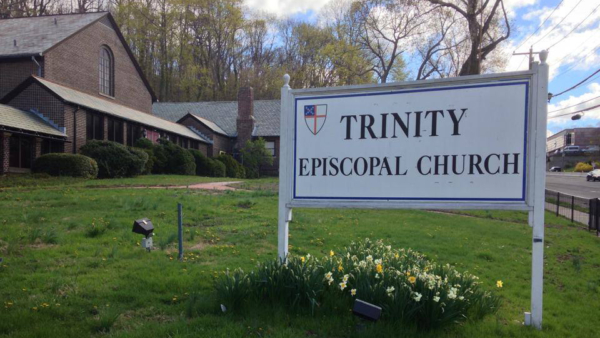 A new, larger church was built in 1906 over the grave and bell, but no record was kept of the grave’s location. It was accessed and the bell recovered and restored in 1914 when a crack in the church foundation led to “a crawling circuit of inspection under the parts of the church most difficult to access,” the Times said in its article that year previewing the dedication of the restored bell.

For a century, the congregation maintained only a general sense of the grave’s position under the floor, with no visible evidence of its existence. Now that it again has been uncovered, Trinity is giving it a permanent marker on the floor so no one will ever forget.

Trinity is a small congregation, with about 50 people typically attending Eucharist on Sundays. Its rector, the Rev. Margaret Peckham Clark, presided over her final service at the church this month before leaving for a new call in the Diocese of Newark, so Trinity is welcoming supply priests on Sundays until it names an interim rector and embarks on a search for a permanent replacement.

At a time when Trinity is planning for its future, the June 2 dedication of Pollitz’s grave is an opportunity for parishioners to take another look back at the short life of a young man who gave his time to the education of the congregation’s children, his money to the parish’s early growth and his life in service to his country at war, said Hansen.

“Pretty impressive, I think,” he said.